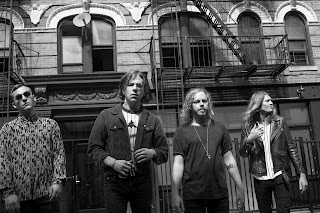 'Trouble' Review:
Cage The Elephant returned with a bang last year with their album 'Tell Me I'm Pretty' and this year stepping up alongside Red Hot Chilli Peppers and Biffy Clyro at Reading and Leeds was quite some feat. I've always been a big fan of Cage The Elephant, but I think this release has been my favourite to date, it's got a bit of everything, whilst staying true to their trademark sound they've manage to evolve their sound even more than in previous years. 'Trouble' the latest single is no exception, a slower start, reminiscent of their earlier track 'Shake Me Down', which was proven to be a popular track amongst followers and non-followers - everyone's heard of it - and 'Trouble' holds the right potion to follow in it's footsteps. With steady beats and bass underlining steady intricate guitars and almost haunting layered vocals. Matthew's vocals highlight the stunning lyrics in this track, which Cage The Elephant have always been known for bringing to life with their alternative rock sound.
The rest of this release is also incredible, and if you like what you hear below, be sure to have a listen to the other tracks on the album, it feels more intimate than their previous albums and is a real headphones, shut the world out album, enjoy!