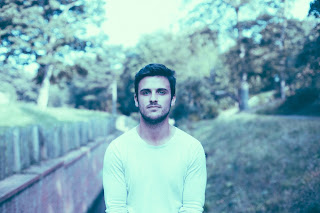 Jake Houlsby is a singer/songwriter from Newcastle, UK and has been described by BBC 6Music's Lauren Laverne as 'sublime'. Since releasing his debut EP 'Yannina' in 2015, Houlsby has also been championed by Tom Robinson and played with artists such as Gaz Coombes, The Lone Bellow and Paper Aeroplanes. Now he's announced his brand new single 'Bloom' - the much anticipated follow up to 'Carousel' - will be released on 25th November, so we caught up with him for a quick Q&A...

1. How old were you when you started getting involved in music and how?
I was 10 when I started playing the guitar. I picked it up because my older brother had and he was my hero, as all older brothers are!

2. What is the most inspiring musical performance you’ve ever seen?
Recently it would be Tallest Man On Earth at The Royal Albert Hall, which was incredible. I also saw a band called Satellite Party about 8 years ago, which has had a lasting impression on me.

1.You’re currently out performing around the UK, but which three venues would you most like to perform at and why?
I’d like to perform at The Royal Albert Hall in UK, Dalhalla in Sweden and The Great American Music Hall in USA. They’re all amazing venues and it would be so surreal to play to a packed out audience there.

2. Who influences you musically and what inspires you lyrically?
Musically, I’d say I’m most inspired by Nick Drake and Sufjan Stevens (yes, I’m a Sufjan fanboy). Lyrically, I’d say Leonard Cohen is my master.

3. What process did you go through creating ‘Bloom’ and how did it differ to the B-side ‘Circus Child’?
I wrote Bloom a couple of years ago but the writing was forced and the song didn’t feel like ‘me’. I loved the lyrics and some of the melody so, last January, I revisited it and rewrote it. I felt like the song was trying to be something it wasn’t, so I took a lot away from it and that’s why it’s fairly understated. An overcooked song is worse than an undercooked song so you’ve got to be careful. With Circus Child, I more or less wrote the guitar part and melody one evening and all the lyrics the next evening. Songs like that only work when they come naturally and I was lucky enough to get the whole thing in one go on this occasion!

If you were to invite any three people round for dinner, who would you invite and what would you cook (or order in)?
If I were allowed to pick people that are dead, I’d invite Sufjan Stevens, Leonard Cohen and Claude Debussy and cook them enchiladas or lasagne cause they’re the only two things I can really cook.

'Bloom' Review:
'Bloom' is a stunning song, with intricate guitar and warm vocals, reminiscent of the soft voices of Chris Martin and Sufjan Stevens. It's the perfect autumnal track, encapsulating a blissful atmosphere throughout. This single is slower and feels more stripped back than some of Jake's previous releases, but still holds his sound well and shows that he's a skilled musician and songwriter. Jake's vocals bring his lyrics to life and manage to paint a picture alongside the, at times, spine-tingling soundscape. An inspiring release and I'm really looking forward to hearing more from Jake!