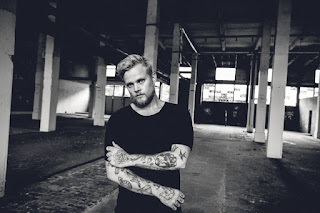 Acclaimed Australian singer-songwriter, Matt Gresham, made his UK debut this summer with the release of his single ‘Small Voices’. The track debuted at #15 in Spotify’s AU Viral Chart and it garnered praise from Rolling Stone. Gresham’s first break however came on Australia’s X Factor, when in 2013 he quit the show citing the talent shows artistic restrictions. Since leaving to pursue the independent route, he’s built himself a loyal following and has become one of the country’s hottest new talents. His song ‘Whiskey’ won Western Australian Music Awards coveted ‘Song of the Year’ and earlier this year he played an impressive string of showcases at SXSW. Now all eyes are on the UK and Europe, as Matt relocated to Berlin after singing with Warner Germany, and releases his latest single ‘Survive On Love’.

1. How old were you when you started getting involved in music and how?
I was 13 years old I used to listen to hip hop on old skateboarding movies and my mother would play acoustic music in the house and write poetry so it was a very natural way to learn

2. What is the most inspiring musical performance you’ve ever seen?
I saw Ben Harper perform a three hour set at the Sydney Opera House was the most beautiful thing I'd ever seen.

3. Who have you been listening to lately?
A bunch of stuff a new artist and friend of mine Max Lumer from Germany a jazz band from Berlin Vivasol
Heaps of old Talib Kwelli and Mos Def

1. What has been the biggest thing you’ve learnt about the music industry in the past three years, from your first break on X Factor, to your recent sell out Australian tour?
The biggest thing I have learned is to be patient. Don't rush, it’s supposed to be a journey and I've learnt a lot about appreciation of the simple things in life and living in the now :)

2. You’ve set your eyes on the UK and Europe, but which three countries would you most like to visit with your music and why?
Portugal because the surf is always pumping there
France because the culture is so elegant and the people are lovely
And I gotta say I wanna travel the whole of Germany and get to know the place more, I feel like there is so much more here for me to discover!

3. What process did you go through creating ‘Survive On Love’, both musically and visually, and how much did it differ to your debut single ‘Small Voices’?
Survive On Love was a happy and exiting experience working with people all around the world from Jaymes Young in LA who co wrote the track  the cast and crew of the video were such a pleasure to work with! Berlin shows its beautiful culture and magical energy in this song.


1. Favourite lyric you’ve ever written?
“whatever it may be, your secrets safe with me, because all our sacred dreams are buried in your chest.” – this is very fresh lyric and it’s a very personal one that gets me every time I sing it.

'Survive On Love' Review:
'Survive On Love' is a memorable pop tune, that keeps you in the summery mood. An incredibly catchy chorus and verses that build and cut, creating a constant contrast. The chorus and melody throughout is infectious and accompanied with the music video, the lyrics share a strong and powerful message. There's some stunning guitar melodies and riffs in there too that really add to the overall feel of the song.