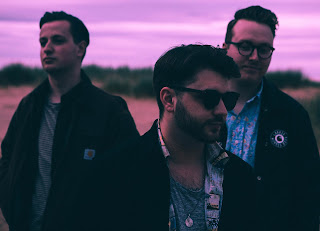 Newcastle trio, The Old Pink House, have arrived with their debut single 'So Bad'. Beginning as a project of frontman Christopher Brown, in his own bedroom recording, it developed into a three-piece including Ollie Winn and Max Middleton. They have played a handful of local shows in Newcastle, where they are building a fierce live reputation and supported Let's Eat Grandma recently too.

1. How old were you when you started getting involved in music and how?
I was 12 when my parents bought me my first guitar but I’d always been fascinated with music for as long as I can remember. My dad’s a huge Black Sabbath fan so that was my starting point, I was really into them from a really early age. I used to sit with my dad’s Sabbath vinyls and just pore over the sleeves obsessively. Once I picked up a guitar and got going that was basically it for me, I just spent all my time doing it.

2. What is the most inspiring musical performance you’ve ever seen?
I saw Arcade Fire in a few years ago as The Reflektors, which was incredible. You could see every single element of the performance, instrumentation and stage show was really meticulously crafted, yet it seemed so visceral and spontaneous at the same time. It was crazy.

3. Who have you been listening to lately?
I’ve been listening to the new Bon Iver record a lot, which I think pretty much everyone is. The new Warpaint record is great as well. I’ve been revisiting Grizzly Bear’s past few albums as well in anticipation of their new album coming. I’m pretty pumped for that.

3 Qs for The Old Pink House:

1. You headed out to support Let’s Eat Grandma on tour, but who would be your dream act to perform alongside and at which dream venue?

I would love to support Unknown Mortal Orchestra. Or Tame Impala. That would be insane. If I was being self-indulgent, I’d say somewhere legendary like Sydney Opera House or something like that. It’s okay to be self-indulgent, I think.

2. What inspires you lyrically and who influences you musically?
Lyrically I guess I like to try and work in a lot of abstractions, which the likes of Grizzly Bear or S. Carey do a lot. I like to just work in imagery and try to conjure an atmosphere, and from that you know people will derive from it what they will. I find it kind of boring to simply just say what I’m thinking when writing lyrics, because realistically why would anyone give a shit about my life?
Musically, I’m influenced by everything I like. I really like a lot of hip hop, like Kendrick Lamar for example, and that really influences the way I think about rhythm. When it comes to music I like mixing up melodies between guitar and synths and just trying to create a really fucked up colourful sound. Bands like Foals and Tame Impala really influence the way I think about melodies and textures.

3. Whilst creating your debut track ‘So Bad’, was it a collective effort or did you all have specific roles within the group?
With So Bad, I wrote and recorded it all myself at home. I kind of built the band around the recordings I did and it’s still growing and mutating. We’ve started working on things together more now, which I think naturally comes when musicians collaborate. I’m still a bit of a control freak so I think the home recording and writing element will always exist in the band.

1. If you were to own an old pink house, where would you have it and why?
I’d have it somewhere cold and quiet where no-one can bother me.

'So Bad' Review:
The Old Pink House have made quite the entrance with their debut track 'So Bad'. It's a cosmic pop track, full of energy, fast paced beats, hypnotic guitar riffs and catchy melodies throughout. This single has a shimmering sound and stands out from other pop/rock tracks at the minute and offers a refreshing approach to pop and rock. Listen once, and you're bound to get it stuck in your head for a good while!