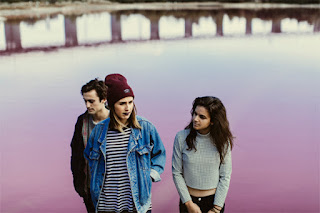 Melbourne natives, Stonefox, release their new single ‘Hands Of Gold’ and are set to head out on a six-date launch tour across four states. Their debut EP ‘Surface’ exceeds 3.5 million plays on Spotify, they recently supported triple j favourites Mosquito Coast nationally, and they already have the ears of international tastemakers Majestic Casual and Mr Suicide Sheep. The trio comprised of Jenna Russo, Monica Spasaro and Tim Carroll, prove themselves capable of not only meeting the high bar set for them, but surpassing it constantly too.

1. How old were you when you started getting involved in music and how?
All our lives really! Jenna and Tim both grew up with really musical families and picked up guitar/piano/singing at an early age. We both moved onto songwriting, performing in various bands and got involved us much as possible with the creative side of things. Tim was sneaking into music clubs around Melbourne at 15 to play with his first band and Jenna was filling up the back of her school text books with lyric ideas. Mon is a classically trained drummer who also started young and continued studying all the way through to University where she got her Bachelor of Music.

2. What is the most inspiring musical performance you’ve ever seen?
Would have to say seeing Mat McHugh (the front of The Beautiful Girls) play at Queenscliff Music Festival. On the day of his set all of his gear actually ended up on the wrong flight and didn’t turn up in Queenscliff. But that didn’t stop him from putting on a show! All he had was an acoustic guitar that he borrowed from another act and his voice and he still managed to have everyone watching in ore and singing along in the rain! It takes a special kind of talent to entertain a soggy crowd with the absolute basics like that and it was pretty inspiring. Was also cool to see all his songs without all the frills, the way they were originally written.

3. Who have you been listening to lately?
We’ve been getting into the latest tunes from a bunch local performers like Lanks, The Winter Gypsy, Soft Corporate and Hollow Coves! One of the great things about touring so much is getting to check out all the cool acts popping up around Australia. It kind of forces you to get out and see all the bands doing good things in the live scene which is really refreshing after being in the studio for so long.

1. How did ‘Stonefox’ come about?
Jenna and I were introduced at a concert out in the city about three years ago. After the show I didn’t have a lift home and Jenna offered to drive me back to the hills. By the time we made it home, turned out we’d been living literally just around the corner from each other for most of our lives but hadn’t realised until right then! We started sending songs to each other, shared our own ideas from there and eventually became Stonefox.

2. You’ve recently supported Mosquito Coast nationally, and are heading out across four states during November, but who would be your dream act to tour with and round which country?
Oh Wonder / The XX / London Grammar – Europe

3. What process did you go through creating ‘Hands Of Gold’, and how much did it differ from your previously released tracks?
‘Hands of Gold’ took a lot of perfecting and was actually taken into the studio twice before we were completely happy with it. As well as being massive perfectionists we wanted it to feel more anthemic than our other songs so it took a few goes to get the right feel. The original idea came from a really basic demo (recorded in the back of a caravan) and after work shopping it as a band with the help of two different producers it finally had the right balance of elements that matched our vision for the tune.

1. If you were stranded on an island and could only have three items, what would you choose and why?


A guitar to get rid of the silence, a lighter/matches for a bonfire and a small fox for company!

'Hands Of Gold' Review:
'Hands Of Gold' is currently one of my favourite songs. It's an atmospheric track with perfectly intertwining vocals, beats and synths. Stonefox have created a track that defines ambient pop; an anthem of heartbreak, yet a 'feel good, get lost in the moment' song in the same breath. They have a bright future ahead of them and I'm already looking forward to their next release...