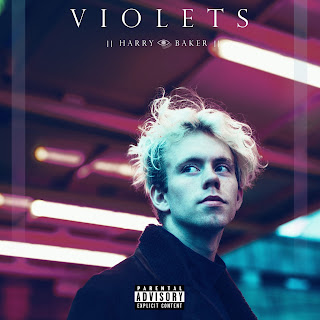 At just 18, Harry Baker has been on the go, playing live, writing, recording and creating for over five years now. With over eight years of guitar and performing experience, he fuses his endless influences to create a unique sound. Harry released his debut LP 'Friends, Themes and Poems' earlier this year to lots of positive feedback, now he's released 'Violets', the first single from his forthcoming album 'Art.She.Said'. Joined by James and Andy for live shows, Harry's got a big 2017 ahead of him...

1. How old were you when you started getting involved in music and how?
We can all agree that music plays a huge role from a very young age – I picked up the guitar when I was 10 and it’s been my other half since.
In that time frame that I head lessons with 80s pop group Strange Arrangement’s guitarist Howard Johnstone - I feel I learnt enough to really get myself going as a musician, writer, performer and guitarist. I then started to sing when I was about 14-15 when I wanted to get further in songwriting and composing etc, I remember singing for my first time in a pub to about 9 people – never been more petrified. (red-in-the-face)

At 16 and after being totally blues / soul mad for about 3 years and aspiring to legends like SRV, BB King, James Brown, Otis, Albert King, and Hendrix I naturally started to drift into the modern world of blues with artists like Gary Clark Jr, John Mayer Trio. After hearing the trio stuff with Pino and Steve I was totally transfixed into this whole lock-down groove thing which then naturally led me to D’angelo – the pioneer of 90s Neo-Soul.
Whilst my main focus in influential music changes over time – there will always be artists that will remain a huge inspiration to me such as Prince, Michael Jackson, (Jacksons), Wilson Pickett, Terence Trent D’arby, The Boss, Hendrix and Bob Marley.

So in 2015 something mental happened, my writing, musical influences, guitar playing all switched totally due to this new area I hadn’t visitied before – think I was scared of stepping out the norm. So suddenly I was mad into this whole hip/hop, soul and R&B thing and before I knew it I was hot on Dilla, Erykah, Jill Scott, Nas, Tupac and then through to the modern characters – Kendrick, Anderson Paak, Childish Gambino, Kaytranada, Bryson Tiller, Goldlink, The Internet. From the beats to the chords, the synths or even the rhymes this new-huge musical phase I’m in plays a substantial role in this new album and I think it’s going to be massive.

There’s so much good live music out there it’s relentless, I’ve been Jools Holland loads and he’s always great of course, John  Mayer was a night to remember because his music means a lot and it’s totally helped shape mine and he introduced me to Steve and Pino which again made some crazy contributions to my music, and Zane was playing with him which was sick.

3. Who have you been listening to lately?
Had this have been around a year ago I wouldn’t have felt so good about saying this but my faith has been totally-fukin restored.

The stuff that’s coming out at the moment is totally screaming, ATCQ’s new album with Kendrick and Anderson Paak on is outrageous, The Weeknd’s new album is ridiculous, Nao is killing it, also a massive fan of Goldlink’s new stuff, Kaytranada’s 99.9% is completely out of this world. Ruary…his stuff  is total fire, the perfect mix between soul-folk and hip hop/r&b. Lest we forget Childish Gambino’s new release…don’t.

1. You've played some big stages at many festivals and venues, but which are your three dream places to perform and why?
My dream gig will always be Red Rocks, so many great people have done great things on that stage – and it’s not a bad location.

Can’t miss Glasto, I’ve had people sing my songs to me, but having a sea of people would probably kill me there and then.

Playing reading and leeds festival would be so much fun purely because I’d probably know most of the people there..ha! Would love to look out and see all my younger mates celebrating their GCSEs J no in all seriousness, I’ve been there and the energy is amazing. But then I say that, energy is part of the music as well as the people so as long as there’s a nice crowd there happy to listen to what me and my boys do, I’m sold.

2. For people who have never heard your music before, describe your sound in five words...
Don’t,even,make,me,try

3. What process did you go through creating 'Violets' and how has it differed from the other tracks from your forthcoming album 'Art.She.Said'?
Violets was supposed to be just an extra on the album, but as we started to add guitars and vocals after I’d spent a while in my room mapping out and arranging it became apparent that this tune was going to be cool. My producer and all time favourite man, Sean from Parousia Productions and I decided that Violets would be a perfect single as it showcases the new synthy vibrance of this new sound but still stays grounded to the guitar based ambience of my home roots.

In some senses the song is unique but still the other tracks can relate quite easily, whether it’s lyrically or harmonically.
I mention violets in a song called “When Will I See You Again “ in my first EP “Friends, Themes and Poems” – however I’m now using synths, which I didn’t before.

The rest of the songs off the album all consist of that cutting snare and phat kick which idea I got from D’angelos Voodoo, Questlove tones – also heavily stacked harmony on the vocals. Trialing dissonances have been fun. Guitar solos n trap beats has been somewhat a strange experience trying to make work together but we’re getting there.

'Violets' Review:
'Violets' starts as a spacey and ethereal track moving into a funky riff laden song. It's a really groovy sound that Harry's created with this new synth focus and some incredible guitar cutting through the layers beautifully. It's gritty whilst still be perfectly smooth and Harry's vocals bring all the instrumentals together in a well structured way. Whilst usually I'd shy away from songs that reach six minutes in length - purely from an attention span point of view, those songs can tend to get repetitive - Harry's managed to create a soundscape and track that continuously rolls and never gets boring, it's got me excited for 'Art.She.Said'!