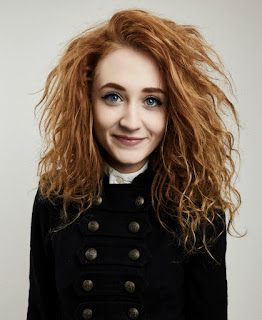 After the resounding success that was her first festive release (December Daze), 21 year old singer/songwriter Janet Devlin has once again given us another christmas cracker. 'Little Lights' was recorded, produced and mastered at the prestigious Abbey Road Studios, and the release was timed to support Janet's 'My Opium' tour. Janet's a completely independent artist, who's built herself a very large following by working hard with constant vlogs, live sessions and stage it shows. You may also recognise this talented artist from her time on X Factor back in 2011, when she placed fifth.

1. How old were you when you started getting involved in music and how?
For as long as I can remember I've been involved in music. My childhood was arranged around my music lessons so I don't remember a life without it. I was so eager to love a creative existence, I also wanted to play as many instruments as I possibly could! I didn't start to sing until I was around 15 due to stage fright and nerves. I've been writing songs since I was 4 though but I never thought anyone would ever hear my music.

2. What has been the most inspiring musical performance you've ever seen?
Probably Keaton Henson when he played live in Dublin last year. It was a beautiful mixture of fragility, honesty and music. I found it inspiring because he's afraid of people and struggles with performing live so I relate to him a lot. It's nice to go see an artist who doesn't hide behind a stage presence or persona and is just open.

3. Who have you been listening to lately?
I've been listening to a lot of Bon Iver! Since his latest album I've just gone back and listened to his earlier works. I'm in somewhat of a rabbit hole with his music, it's just on a loop everywhere I go at the moment!

1. Since your experience on X Factor, how (if at all) has your view on the music industry changed and has that affected your approach to music since?
It's hasn't affected it much at all. Since it's a TV show it's quite far separated from what my experience of what the music of what the music industry has been. It's also miles away from what I do now, in the sense of budgeting aha I'm an indie artist so purse strings are tight in comparison to one of the biggest television shows in the country!

2. You've toured extensively in the past couple years, but where would you most like to perform and who would you have as your two support acts?
I would love to play Madison Square Garden! I'm somewhat obsessed with New York City so the idea of playing a venue like that is just mind blowing! As for support acts... I'd probably just get one of my close friends to do it! It'd be amazing to have some pals to join in on the experience!

3. Which track from your 'Little Lights' EP is currently your favourite and why does it stand out to you?
My favourite track hands down is 'Wake Up It's Christmas'. I always love my saddest songs the most, I'm a sucker for dark vibes! When I wrote it I tried imagining a worst case scenario for what could go wrong at Christmas... Being dumped from a long term relationship seemed to be a terrible enough scenario to write about aha! I think it's my favourite because it's sad but it also sounds  hopeful.

Best thing about the festive season?
Being home with my family! I only get to see my family around two times a year so finally seeing them and having some quality time with them is what I look forward to the most! My mum makes some great home made meals so that's definitely a factor!

'Little Lights' EP Review:
'Little Lights' opens with 'Wake Up It's Christmas', a stunning song comprised of steady piano coated with Janet's harmonious layers of vocals. It has a magical feel to it which continues throughout the rest of the release too. A cover of Slade's 'Merry Christmas Everybody' follows, it's a steadier, glittered version and Janet has definitely made the song her own. 'Merry Christmas Mum and Dad' is a heartwarming and honest track, which to me is what Christmas songs are all about, it's nostalgic and carries an innocence from start to finish. This particular track highlights Janet's ability to couple her lyrics with stunning music to create a whole sound that pieces together perfectly.
Janet's cover of 'White Christmas' stays true to the original but also has a seemingly darker twist to it. 'Something Beginning With Christmas' follows and picks up the tempo of the EP again, this track has an energy that brings back the excitement to Christmas and the music that comes with it. The release finishes with 'Christmas Kiss' which rounds the EP up perfectly. A brilliant and stunning release, next time you're stuck for new Christmas songs to listen to - this should definitely be your go to!