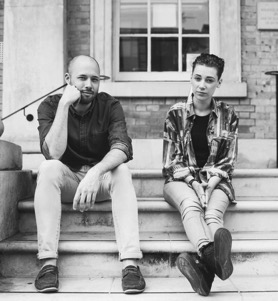 Temples Of Youth are an upcoming and acclaimed electronic duo from Winchester, UK. Paul Gumma and Jo Carson began working on their live set in December 2015, with the desire to bring their music to the stage with a limited number of hands; Jo on percussion and Paul on guitar, utilising samplers and effects to recreate their sound. They've attracted the attention of BBC Introducing, and were invited in for live sessions with BBC Introducing South and Solent. Their tracks 'Enso' and 'Dunes' have received airplay on BBC6 and BBC Radio 1, they've also been named 'Ones To Watch in 2016' by Selector Radio and were nominated for a Best of British Unsigned award this year. Now they're back with their last single for 2016, 'Divide'.

1. How old were you when you started getting involved in music and how?
Paul: I picked up the guitar at around 15 after listening to Definitely Maybe and played in all kinds of indie rock and grunge bands throughout my teens.
Jo: My Dad bought me an acoustic guitar when I was about 14 and I started with that - he tried to teach me but I got bored really quickly. A few years later I picked it back up and learnt some Joni Mitchell.

2. What is the most inspiring musical performance you've ever seen?
Paul: The most inspiring musical performance I've seen was either Lykke Li performing acapella in Rough Trade or Brian Wilson performing the Smile album for the first time at The Royal Festival Hall.
Jo: For me it was seeing Florence and The Machine at Alexandra Palace. I cried, it was absolute magic. A close second was Jose Gonzalez in London. I was in the audience for Later with Jools Holland once and that whole experience was unforgettable.

3 Qs for Temples Of Youth:

1. How did ‘Temples Of Youth’ come about?
Paul: Jo replied to an advert I put out seeking a singer and we worked on a few demos with both of us bringing ideas to the table and that gradually evolved into Temples of Youth and the minimalist set up we now have.
Jo: What he said.

2. Which three countries would you most like to tour and why?
Paul: I would love to tour Japan because it's a beautiful, fascinating place with amazing food and the people are so welcoming. The US, because it's the birthplace of all my favourite music and film and art and it's so diverse, culturally and geographically. Maybe west Africa so I can see a Potto.
Jo: America for sure! I've been to LA and Manhattan and I would just love the opportunity to go back and play in some of the venues. Agree with Paul that Japan would be very cool.

3. What process did you go through creating ‘Divide’ and how much did it differ from your previous release ‘Churches’?
Paul: For Divide, Jo sent me a sketch of the verse, bridge and chorus that she'd been working on and I built up the drums, bass, synth and guitar around it based on the chords she had and added in some sections. We passed ideas back and forth and chipped away at it until it was fully formed and then I recorded and mixed it which I'm still very much getting to grips with at the moment!
Jo: It differs from Churches in that it's more a driving, uplifting track. Churches was very personal and emotive, and almost quite stripped back. There's more going on in Divide.

1. You were named ‘Ones to Watch in 2016’ by the Selector Radio Show, who’s your ones to watch for 2017?
Paul: My one to watch is PYN, her new EP, The Ryder, has some really well crafted, melodic pop.
Jo: One of my ones to watch is Julia Jacklin on Transgressive records. Sort of a Lana vibe going on. I think we'll be seeing lots more of her next year.

'Divide' Review:
On first listen I got completely lost in this track. After listening a few more times I got through the flawless soundscape and atmosphere created by Temples Of Youth on this song. Powerful beats placed throughout, synths and guitars built together and vocals floating across the layered instruments. I think this is my favourite release from the electronica duo so far, 'Divide' encapsulates everything Temples Of Youth create and if you like this, you'll love every release before this too. I'm really excited to see what's to come in 2017...