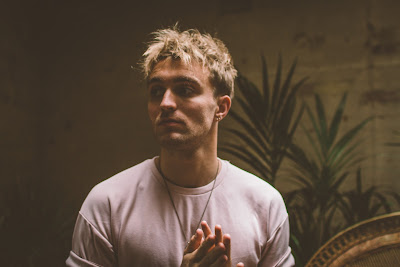 London based artist, Martin Luke Brown, is back with his second single on Manchester indie label LAB Records. 'Opalite' is the follow up to the brooding slow-burn of 'Into Yellow'. He's recently had a show at London's Servant Jazz Quarters, which sold out in double quick time and has a combined near 10 million streams on Spotify.

1. What inspires you lyrically and who has influenced you musically?
I've been getting a lot more into poetry recently. Oscar Wilde and Bukowski that famous ones. But also just flicking through blogs and listening to spoken word videos online. I like listening to words that aren't hindered by melody. So that a bit I suppose, but in terms of content it's usually just how I'm  feeling about a particular thing at that given moment. Musically - I grew up on 60s/70s music, so a lot of Motown, The Beatles, ELO, The Kinks. Through teenage years I got more into experimental sounding stuff. Emily King, Tingsek and James Blake are my go to artists at the moment. I also love Glass Animals for the mad soundscapes they create.

2. Your sound has changed over the past few years and is constantly growing, how are you able to be so versatile and keep it current?
Haha I know, I change too fast really. I feel pretty settled where I'm at now though. I think being versatile weirdly has been a bit of a problem for me - I've struggled to stick at one thing for too long. I get bored. But yeah, I feel pretty settled now, I think this soundscape will stay for a while!

3. 'Opalite' is a perfect counter follow up to 'Into Yellow', are you planning on continuing to release singles one at at time or is there an EP on the cards?
I'm taking it one tune at a time for now. But an EP is definitely possible - the songs are there. It's just how to frame them really and in the modern musical landscape it's good to give each song a chance to live it's own life.

4. You recently played a sold out show at London's Servant Jazz Quarters, but what has been your favourite on stage memory?
Yes! And it was so nice, it's been too long really. I played in Milan on one of the Jack Garratt shows and I had to pause half way through a song cos I got a bit emotional and the crowd just cheered so loudly and so incessantly. I'm a pretty composed person generally but it was almost like for a second I realised how lucky I was to be doing what I was doing. I may or may not have had a little cry.

5. If you invent a chocolate bar, what would be in it and what would you call it?
A milk free milkybar. So vegans and lactose intolerant people could all enjoy that magical flavour. I'd call it a 'Silkybar'. It'd be extra creamy.

'Opalite' Review:
'Opalite' has a punchy beat and a catchy melody, with nods to Bon Iver. This track shows off his versatile vocal range and melodies. His lyrics are poetic but behind the lyrics there's an upbeat indie vibe throughout. It's a tune you'll be drumming and singing along to in no time at all.