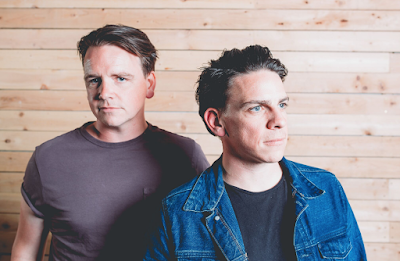 Hailing from Leeds, The Dunwells formed in 2009, by brothers Joe (vocals, guitars) and David Dunwell (vocal, piano, guitar). They've previously released two albums and two EPs and have toured all over the world supporting a list of big names. Now they've announced some live dates for 2018 and a brand new EP to be released on 1st December of this year (2017). We caught up with Joe for a quick Q&A...

1. You've just announced a brand new EP, 'Colour My Mind', what's your favourite track from the forthcoming release and why?
I love the track 'Fire Down', I mean I am absolutely proud of the whole EP and how it has all just fallen together but 'Fire Down' is intense. It's our fight song! The other day I was watching Rocky Balboa and I thought, 'Fire Down' would be perfect for this, it's the bit in the film where he says, 'it ain't about how hard you can hit it, it's about how hard you can get hit and keep moving forward.' Genius!

2. The sound of this EP is difference to previous, what prompted the change for this new release?
The EP is something we are really proud of and I think the change is just a natural evolution of The Dunwells, we wanted there to be more of an organic sound, me and Dave have figured as long as it has key Dunwell elements, like our vocals and vocal harmonies then the music can go wherever it feels, no limitations, that's the joy of making music.

3. You're heading out on a string of live UK dates next year, but where would you most like to tour in the world and why?
My favourite thing to do is tour, I have been so lucky that a handful of songs and a guitar have taken me around the world, but I always want to see more. I have never been to Australia so that would be a dream come true to go there, I love Europe and would like to explore that a bit more, but right NOW I am getting so excited to go back on tour in the UK.

4. With shows across Europe, support slots, headline tours, and festival performances, what is your favourite live moment you've experienced?
This year has been an amazing year, creating this EP, we have also nailed down a few tracks for the album that we are going to drop next year too and whilst doing that we got to play our first stadium show ever supporting Bryan Adams at the Ageas Stadium. That was pretty spectacular. The moment I walked on stage I thought this is it, this is what I want to do for the rest of my life.

5. Who's your all time favourite artist/band?
Damien Rice - This guy made me fall in love with songwriting, when I was young I would listen to his album 'O' on repeat.
And, Radiohead - Again the OK Computer Album, it changed my world.

'Colour My Mind' Review:
'Colour My Mind' is a fantastic title track, as soon as the beat kicked in, you knew it was going to be an upbeat and loveable song. The simple vocal melody in the chorus supplies a hook that will get stuck in your mind, and the soulful vibe is bound to pick you up. It's a great song that holds great promise to be even better live.

Colour My Mind - The Dunwells (link)