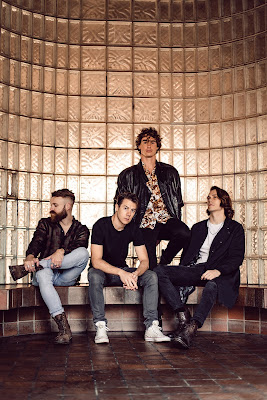 London four-piece, Don Broco, have just released their latest single ('T-Shirt Song') from their third album, 'Technology'. The album follows their 2015 Top 10 album 'Automatic', which propelled the band into mainstream consciousness. Since that release the band have played a sold out headline show at O2 Brixton Academy and played arenas across the UK, the United States, Europe, and Japan with Bring Me The Horizon, 5 Second of Summer and many more. They've just played their biggest headline show to date at London's Alexandra Palace and are looking forward to the album release and February 2018 tour...

'T-Shirt Song' Review:
Don Broco are back with another punchy and incredibly catchy track. It cuts and builds into fantastic thrashing choruses that are bound to get to stuck in your head. This release highlights why they're supporting the likes of Bring Me The Horizon on tour. Their tracks are full of energy and bound to get the crowd going. Everything comes together so well and fronted by strong vocals it's a song you'll be drumming along to in no time!