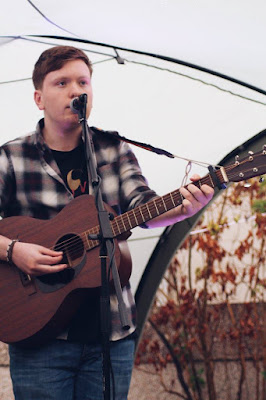 Darragh Chaplin comes from a musical family, since an early age he's played the drums and picked up a guitar for the first time aged 14 but has always been singing. Darragh's performed at many open mic's locally and is also making his way onto many a festival line up this year...

1. How have you found the process for you first release - was it all that you expected?
It's been really fun! I did the whole thing in my bedroom on my own so it's been quite enjoyable for me to just sit behind a microphone and a laptop and just work away in my own little world on it, so I've enjoyed that part! And obviously I love songwriting so I've enjoyed working with these songs and turning them from just acoustic guitar and voice into something a bit larger.

2. What inspired this release?
Well before this release I only had one song up on Spotify and iTunes so I thought I definitely need some more stuff up there for people to listen to. Also, I'm awful with keeping to my own deadlines so it was definitely a good way of pushing on with my music and making something I'm proud of!

3. Which song is your favourite from your EP 'Comfort' and why?
Hmm, I'm not sure, all of them mean something different to me, but I would probably say 'Comfort'. It was the first song I recorded for the EP and the most recently written one so it's still fresh and the lyrics are quite meaningful and relevant for me, but obviously I do still like the other ones!!

4. Where do you hope to be musically in two years time?
Well, I mean I wouldn't turn down the Pyramid Stage at Glastonbury but I would like to have released an album and hopefully tour it, or be in the process of making an album and planning a tour!

5. If you could perform anywhere, where would you choose and why?
One festival that I've always wanted to play at is Barn On The Farm! It's quite a small festival but it just seems like a really nice atmosphere and they have some of my favourite musicians playing, so for me it would be great to be featured on that lineup. In terms of venues though, Hammersmith Apollo has got to be up there; I recently saw my favourite band Bon Iver there and it was such a beautiful venue, and definitely holds a special meaning for me now, so hopefully one day I'll be able to stand on that stage and play my music!

'Comfort' EP Review:
The title track 'Comfort' opens the EP beautifully, with it's stunning guitar melody. This smooth song will transport you into relaxation, as every part of it simply falls into place. With it's relatable lyrics, swelling dynamics and gentle melody, it will get caught in your head. 'In That Light' rings true to Darragh's style, with clear influences from Jason Mraz and Ben Howard shining through. The complicated guitar truly flatters his soft, yet striking vocals. Instantly you know 'Too Young To Grow' is the track that's going to stand out from the rest with it's more haunting double tracked vocals. It leaves you with chills as it lifts you up and down throughout the structure of the track. Subtle harmonies and gentle riffs surround you throughout, making it a memorable experience. 'Untitled' rounds off the EP nicely, showing Lewis Watson inspired vocal melodies, his vocals cradle your ears with it's raw brilliance. Delicate but well conducted musical support lifts the song in all the right places. Overall, this EP will leave you nostalgic in a trance with Darragh's charming vocals and skilled songwriting.