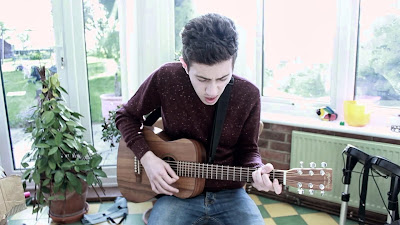 Shaun is a 17-year-old singer/songwriter, he began uploading videos to Youtube over a year ago, which have been a mix of originals and covers. He's played for Lewis Watson and his most popular video has had just under 5,000 views.

1. How old were you when you started getting involved in music and how?
I've always done music, from the age of 4 to 12 at stage school but I got involved with music as an artist from the age of 15.


2. What was the most inspiring gig/concert/festival you've been to?
I don't erally have an inspiring gig that I've been to but one of the first gigs that I went to which I really enjoyed was seeing Lewis Watson last year in London.

1. How do you choose which songs to cover?
It's usually a song I like or a recent song I heard come out.


2. If you could duet with anyone, dead or alive, who would you choose?
There's so many!!! My top five in order would be Ed Sheeran, Lewis Watson, Bruno Mars, Stevie Wonder and Michael Jackson.

What's your favourite song that you've written and why? (from Maria)
Probably 'It's You' because it's my most recent and I've realised the more songs I write, the better the songs get.


Reviews of 'It's You' by Shaun Colwill:

2. Tracy: 4/5 - needed 2nd listen to, to be convinced but then liked it - lyrics good & voice BUT agree would be GREAT to hear what can be done with full band.

'Of The Night', originally by Italian band, Corona, in 1993. This track has recieved many covers and remixes, but none as succesful as Bastille's medley of 'The Rhythm of the Night' and 'Rhythm is a Dancer'. It's appeared on their mixtape 'Other People's Heartache' and has now been released as a single, peaking at #2 in the UK Singles Chart.


Of The Night - Bastille (link)

'Tennis Court', by 17-year-old, New Zealand singer/songwriter Lorde. This track is the second single from her debut studio album, 'Pure Heroine'. Lorde's popularity grew after her single 'Royals' became very well-known and succesful. Herre she is performing live on Letterman.

Cover: The Monster/Best Song Ever - Rudimental

'The Monster', originally by Eminem and Rihanna, mashed with One Direction's 'Story of my Life' makes a great cover from Rudimental. Both songs did well in the charts and they've been brought together to create a soulful, funky tune.

The Monster/Story of my Life - Rudimental (link)

'Brown Eyed Girl', Van Morrison's debut single, written and recorded in 1967 is an all-round well-known song. It's been covered by hundreds of bands over the years and has earned many awards, such as being included in the Grammy Hall of Fame and when it was listed as one of The 365 Top Selling Songs of the 20th Century.