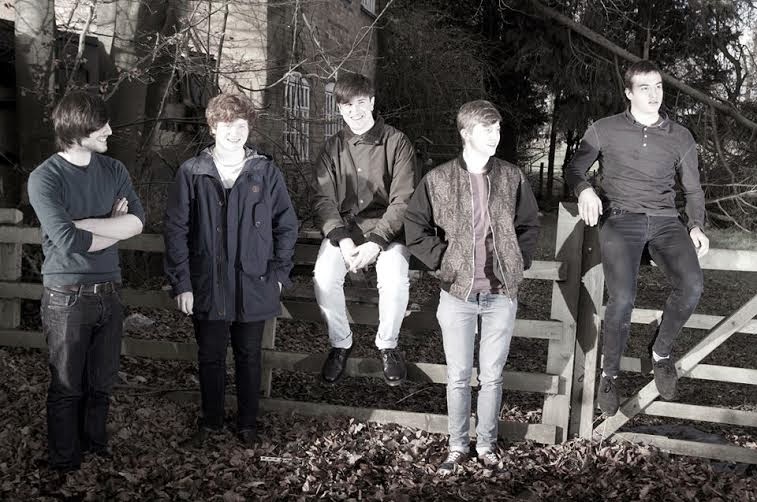 LOVATS are a five-piece alternative/indie band from Birmingham, comprised of Nathan Barker, Tom Barr, Ryan Clark, James Jackson and Ciaran Scanlon. They have headlined at the O2 Academy 3 (in Birmingham) and got many positive comments and feedback, which led to them supporting The Musgraves, who have appeared on BBC 1's, Graham Norton Show. They have released an EP under their previous name Quayside, but are set to start working on their second EP any time now... Here are some answers from Tom, Ryan and Ciaran.

1. How old were you when you started getting involved in music and how?
TB: I remember really wanting a guitar for Christmas one year when I was about 8, I think my parents love for music rubbed off on me, there was always music playing on the stereo or TV at home. I started taking guitar lessons at primary school and that's where I met Nathan as he was in the same class. I met James and Ryan during high school and we were in various different school bands and guises, eventually I went on to study music at college where I met Ciaran and formed LOVATS.

CS: I grew up with music all around me, whether that would be my brother and Dad listening to the Stone Roses or being in my family pub listening to Jonny Cash. I started properly when my parents bought me a bass guitar one Christmas, and since then it's all I have ever done.

RC: I started learning guitar in about year 5 because a couple of my friends had lessons and I wanted to have a go. I really loved it and my Mum has a really old acoustic in the attic so we got that down, and I played non-stop until I got my first electric guitar for my 10th birthday. I still use that guitar now. I started playing bass when me, Tom and Nathan first became a band with some other kids when we were about 11, and have continued to play it for as long as we've known each other.

2. What is the most inspiring gig/concert/festival you've been to?
TB: This is a hard one to answer, I've been to loads of great gigs, I really enjoyed Reading Festival last year, there were some great inspirational moments, like watching Tame Impala's very edgy and visually exciting set. As well as Alt-J they rounded of the Saturday night perfectly!

RC: The Chai Wallahs tent at Green Man, there is nothing that compares to being there!

3. What have you been listening to lately?
TB: The Physics House Band, DIIV and Beach Fossils.

CS: Recently, I have been listening to - Fleetwood Mac, Brontide and Tame Impala.

1. When and how did you become the band 'LOVATS'?
We formed LOVATS in December 2012 out of our previous band Quayside, all of us met through education in some way, and have all been in different bands, some of us go way back to primary school. So I guess you could say it's one big educational fluke.

2. Out of your released songs, which one do you enjoy playing the most and why?
I think we all really enjoy playing 'Golden' live it's a great one to get people up and moving to and ends with a nice big powerful ending!


3. What songwriting process did you go through with 'White Fire' and was it similar to the process of writing your other songs?
'White Fire' came along like the rest of our tracks, it came out of a jam at rehearsal. When we first jammed it, I think it was about 8 or 9 minutes long and there was no real structure, but we managed to fit some lyrics over the initial idea and developed it from there during rehearsals and in the studio when we came to record it.

If you were to recruit a member, what would the requirements be?
I don't know really, there isn't a checklist you fill in as such, it's more just about whether that person is going to fit in and be beneficial to the band.


Reviews of 'White Fire' by LOVATS:

This track by Tinie Tempah, English rapper, features vocals from Labrinth. It's due to be released on 2nd February (2014) and however, it is already climbing the charts, because of independent release and is sat at #22 in the UK Singles Chart. This is Tinie's third single from his second studio album 'Demonstration'.

21 year old, singer-songwriter, Gabrielle Aplin has gained mainstream attention in the past year, following her cover of 'Power of Love' being chosen for John Lewis' Christmas advert in 2012. Her most recent tracks 'Home' and 'Salvation' have also been played a lot recently on BBC and linked channels. Here she is performing one of her latest singles 'Home'.

'Hold On We're Going Home' originally by Canadian artist, Drake, from his third studio album. Covered here by fellow Canadian musician and singer-songwriter, Lights. Lights is well-known for her electropop tracks and covers on her Youtube channel, this is cover is far from that, showing she's a great acoustic artist too.

A classic track by British rock band Queen. When it was released as a single, it stayed at the top of the UK Singles Chart for 9 weeks. It reached #1 again for 5 weeks, following Mercury's death, and has become the UK's third best-selling single of all time.