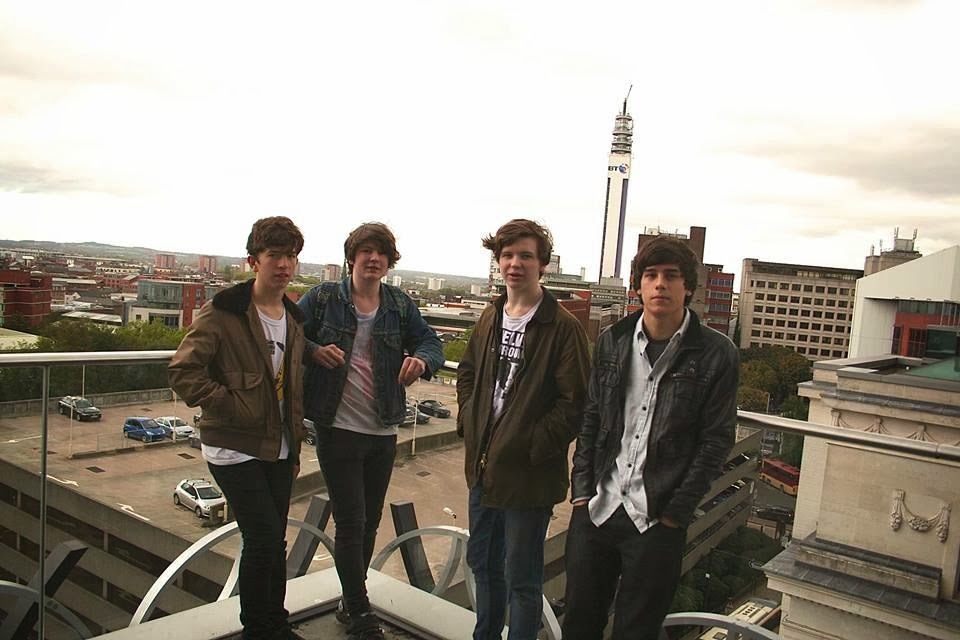 Malone Malone are a four piece alternative band from Birmingham, members include Giles Lawrence, Carl Lawrence, Louis O'Reilly and Max Andrews. Their debut single, 'New Turn' was released in December (2013) and has received positive praise from their growing fanbase. Single number two is already in the pipelines, Louis and Carl answered a few questions ahead of their headline show at The Rainbow in Birmingham on 28th February (2014).

1. How old were you when you started getting involved in music and how?
LO: I was 9 when I got my first drumkit, I pretty much taught myself to play from watching videos etc. Watching drummers such as Gary Powell and Matt Helders, made me want to play in a band.

CL: I started a bit of a punk band with my mates in school when I was 14. I quit that band because it wasn't going anywhere lol

2. What is the most inspiring gig/concert/festival you've been to?
LO: For me, it has to be Green Day at Reading 2013, watching them play a non-stop 2 and a half hour set including Dookie in its entirety was absolutely brilliant, I felt like I was 13 again.

CL: Bit lame I suppose, but when I went to see Swim Deep in February last year, that was my first proper gig and it opened me up to live music I guess.

3. What have you been listening to lately?
LO: I am liking The 1975 quite a lot at the moment, their debut album was flawless and I'm looking forward to seeing what they follow it up with. I'm also really enjoying the new Bombay Bicycle Club album.

1. How did you guys become Malone Malone?
We formed Malone Malone as a fresh start from our old band, Invade the Armada which me and Giles were in. We were good friends with Max outside of the band and Carl is Giles' brother so we formed a new band with them.

2. Why/how did you decide to make music in the genre you do, and who influences you musically?
We just play what feels natural to us, a few people take the mickey out of us because we sound like Two Door Cinema Club because apparently sounding like Two Door Cinema Club is 'uncool' but at the end of the day they're picking on a young band because they have nothing better to do with their lives. Pretty tragic isn't it?

3. What process did you go through writing and producing 'New Turn'?
We wrote New Turn about a year ago as Invade The Armada. When we formed Malone Malone we changed it around and mixed it up a bit. We recorded it in Wales with Gazz Rogers who has previously worked with the likes of The Editors and Paolo Nutini.

Currently sat at #10 in the UK Singles Chart, after peaking at #4. This track is a song by English production duo Gorgon City and features from upcoming English star singer MNEK. Personally, I love the fact that this style of music is making it into the charts, it's great to have a dance hit with smooth soul vocals too.
Ready For Your Love ft. MNEK - Gorgon City (link)

Personally, I think any song that is performed live with strings and drums together, and well, deserves credit. The track peaked at #2 in the UK Singles Chart and has become one of their best known songs from their debut studio album Bad Blood. Here they are, performing the track live at Capitol Studios (the videography is pretty stunning too)!

I've enjoyed all of London Grammar's Live Lounge sessions and love their covers (In For The Kill and Wrecking Ball - both covers I suggest you have a listen to!) Hannah's silky and stunning vocals really make this cover with the great musicality of Dan and Dot adding a great supporting backing track. Here they are covering British - Canadian girl group All Saint's song 'Pure Shores', which when released achieved #1 in the UK Singles Chart for two weeks and was a global hit.

Classic: I Will Always Love You - Whitney Houston

Seeing as this week sees two years since, the wonderful Whitney passed away and it's Valentine's Day, I thought this was an apt song to choose. Originally, by American country singer/songwriter Dolly Parton, Whitney recorded a version of the track for the 1992 film, The Bodyguard and is one of the best selling singles of all time. Enjoy!

I Will Always Love You - Whitney Houston (link)