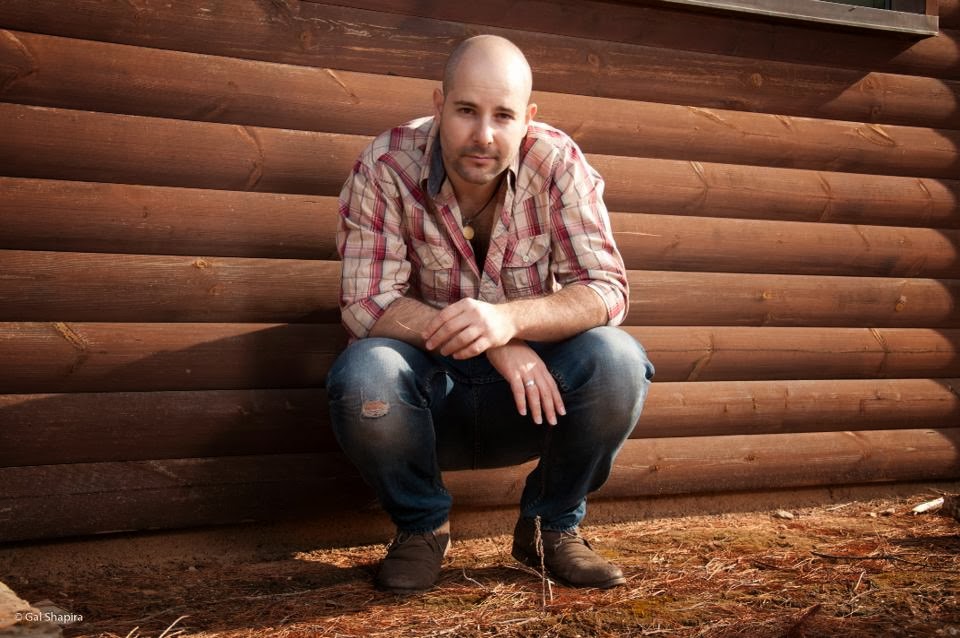 Omri Nobel, 32-year-old singer/songwriter, producer and composer, born and raised in Kfar Sava, Israel. His music is a combination blues, country and rock, 'a mix of dark emotion and unsatisfied passion'. In the past year, Omri has been recording his debut album with the producer Asi Abergel and touring all round Israel.

1. How old were you when you started getting involved in music and how?
I was in the 2nd grade, 8 years old in the middle of a music lesson in school, I was interrupting the teacher and as a punishment she told me to stand up and sing in front of the whole class - I stood up and sang Elvis style including the hip movement, the whole class including the teacher were laughing their a**es off.

2. What is the most inspiring gig/concert/festival you've been to?
Recently, I witnessed the legendary Guns 'n' Roses, I'd been waiting for that concert for my whole life, it was the best show I've ever seen.

3. What have you been listening to lately?
I like listening to new bands, wandering Youtube, searching for new inspiration. Blackberry Smoke is one of the coolest bands I have ever heard and they are an inspiration to me - because they combine groove, energy and emotion into a southern rock sound.

1. You've been recording your debut album in the past year, where have you gathered inspiration for your tracks?
I have a family member that told me that a true artist plans his debut album from the moment he's born. I am 32 years old today and the inspiration comes from many experiences during those years - my childhood, my relationships and overall life experience.

2. You have also been touring around Israel recently, but what 3 countries would you like to visit and perform in and why?
First, the US - because that is the origin of my style - country, blues and rock.
Second, UK - one of my favourite bands Coldplay brought a whole new playing style which I love very much.
Third, any Arab country - it would be interesting to get to know the culture and to bring closer the peace in the Middle East.

3. What songwriting process did you go through with 'Light The World For Two'?
I wrote the song 2 months before I got married, as I sat on the bed, looking at my future wife and the mother of my children, I couldn't imagine my life without her and what she means to me. I thought what I would tell her if tomorrow I won't be able to see her, beside 'I love you'.

Which bands/artists inspired you when you were younger?
Guns 'n' Roses, Pearl Jam, Tom Patty, Nick Cave and many others.

Review of 'Light The World For Two' by Omri:

With a large influence on sound from Coldplay, this is a showcase of Omri's musicality. Calming guitars going into heavy drum and guitar instrumentals, with hints of Nickleback throughout. Honest lyrics add to this track and create Omri's sound. Personally, I had to listen to the song without watching the music video as I didn't enjoy the video, however I guess it adds to the story of the song.

'Let Go For Tonight' was released as the second single from debut album 'Glorius' on 23rd February 2014. Only a few days after release it's sat at #7 in the UK Singles Chart. Foxes is one to look out for this year, with a hint of Lady Gaga, Ellie Goulding and Clare Maguire. She's currently touring the UK and Ireland.

The BRITs this year was full of great live performances, however one stood out to me, Bruno Mars and his band performing 'Treasure'. The track was released as the third single from his second album 'Unorthodox Jukebox'. Bruno won International Male Solo Artist for the second time in 3 years and gave a bouncy, catchy performance.

This cover comes from a few years ago, but it's one that I rediscovered on my iPod a couple of weeks ago and fell in love with it again. Originally written and recorded by Adele and released late 2010, this was an incredibly popular song, it's recieved many awards including three Grammys. Many popular artists have covered the track, but this one recieved a lot of publicity from the iTunes Festival 2011.

Rolling In The Deep - Linkin Park (link)
Youtube: Stay The Night - Two Worlds
Two Worlds are two guys from Aurora, America, they share their incredible harmonies and musicality with the world on their Youtube channel, which is backed by the likes of Tyler Ward and Alex G. They upload a range of videos from incredibly good covers (check out their acousutic cover of 'Happy'), originals like 'Stay The Night' and videos that get their personality across too!
Stay The Night - Two Worlds (link)