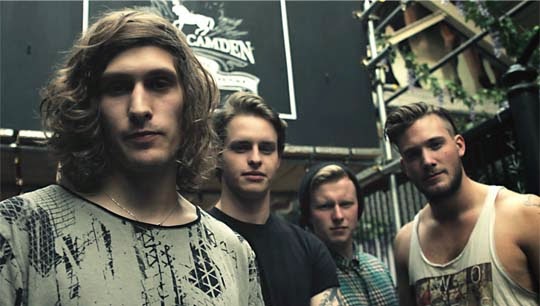 Bwani Junction are an alternative group from Scotland. Fergus, Jack, Rory and Dan have recently supported Little Comets on their tour and have had previous success in the music scene. Headlined the BBC Introducing stage at T in the Park in 2011 and played Hogmanay Concert in 2012. They were also nominated for Scottish Album of the Year in 2012, these guys are definitely a band to watch! Here’s an interview with lead singer, Rory!

1. How old were you when you started getting involved in music and how?
We were all involved in music quite early as we come  from musical families, but we started playing together when we were 10, for me it was because I was choosing between a career in football or music at the time, and I'm shit at football. No brain-er.

2. What is the most inspiring gig/concert/festival you've been to?
For me it was John Prine, he is one of my idols and I saw him in Glasgow. He's pretty old now but he can still do a 3 hour set, and hold the crowd in the palm of his hand for the whole show. Very impressive. The guys might say Paul Simon at Hyde Park though, which was also incredible. We were backstage so we got to see him play the whole of 'Graceland' with 'Ladysmith' up close and personal. Kind of ridiculous when you think about it. Start a band with your pals and few years later you're watching Paul Simon from his backstage bit (we weren't invited in there though, that was a skilled capture the flag mission).

1. You're all from Scotland, but how did you form and where did the name come from 'Bwani Junction' come from?
We were at school together, the name comes from a novel by John Masters. It's the story of the British leaving India, and the half British, half Indian off spring of soldiers having to choose to stay or go. There was just something about the name that attracted us and it suited the music so we played about with it for a while until Jack's (drummer) Granddad told us a story of she he met John Masters on a boat. The story goes that he boarded with a lady on each arm and a bear he had rescued. Our kind of guy. History doesn't relate as to where the bear actually came from but it became a member of Jack's family or a while, and sat shotgun in their jeep scaring traffic. We reckoned this was a good enough reason to name our band after one of his books.

2. You've just been touring with Little Comets, which song do you enjoy performing the most and why?
Always the newest song. There's always something really exciting about writing a new piece of material. Every song, whether it's a hit or not is the most important song you have ever written for a moment in time, so playing a new song for the first time live is a real thrill. We tend to jump the gun a lot and play songs that aren't even finished so we'll all still be improvising our parts. So if you hear some questionable lyrics at a show this is why. My go to word is snowman.

3. What process did you go through creating 'Caveman' musically and visually?
'Caveman' is a song we have been planning for years in different guises. It originally sounded nothing like does now. We were going through a strange phase of trying to be semi instrumental at the time, so there was only one or two repeated phrases of lyric at the beginning (a bit like some jamming jazz song) we tried to record it like that and our producer Paul pumped the breaks. So it didn't make it onto the first record, we went back to it during pre-production for the second record and thought we could change it up a bit. Jack started playing his best ''when the levy breaks'' kind of drumbeat and it seemed to make sense. It all kind of fell into place from there.
As for the visuals, it's usually spun off the lyric of the song. It didn't feel like the kind of song we could do another tongue in cheek kind of video for, so we went down a different route. The song is about desire so the video features a girl that we are all chasing. The slight oriental bend is to do with Dan's guitar part at the start of the song. Videos are still something we are really keen on, it's important for bands to spend a lot of time on the visual aspect of their music as it can change people's opinions of a band. We still have a lot of exploring to do in this area (and some practise acting).

After a successful debut album, Passenger is starting to release singles from his second album, which is due to be released 9th June (2014). The track 'Whispers' is already in the singer/songwriter chart at #8. True to his soothing acoustic rock self, this song makes me excited for his upcoming release.

Nina Nesbitt is a Scottish singer/songwriter who has been growing into the music scene over the last couple of years. Nina's chart hits have been upbeat and catchy tunes and not many people know her for the slower songs, such as 'Jessica' and 'The Funeral' (both songs worth a listen). This is a live performance for Transmitter of one of her favourite tracks from her debut album 'Peroxide'.

Cover: Ready For Your Love - Wilkinson

Wilkinson always delivers a good cover in sessions, and chooses the right vocalists for each song too. Ready For Love, originally by Gorgon City with MNEK, released in 26th January (2014). It peaked at #4 in the UK Singles Chart.

Ready For Your Love - Wilkinson (link)

Casey Cooper is an American drummer, who has been playing drums for the past 15 years. This cover stands out to the others as he nearly performed with Ellie at her BRITs performance, plus, it's a drum cover with fire sticks, what more could you want? All his covers are great, and he's uploaded some drum solos too...