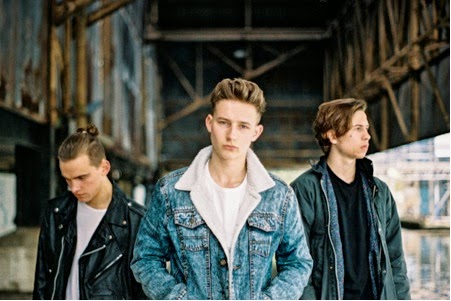 Jacob & Goliath are a three-piece band from Brentford in West London. Including Jacob Simpson (guitar, lead vocals), Charlie Brown (Drums, backing vocals) and Sam Bryan (keyboards).
They will be releasing 'Eyes Conveyed', their debut EP on 15th June via Manchester's LAB Records. Taking in a variety of diverse influences, the EP was produced by Paul Stanborough at his studio, The Biscuit Factory in East London. Jacob & Goliath have recently filmed a stripped version of track 'Green' for Burberry Sessions. The band are also headlining The Islington for their EP Launch Gig on 2nd July (ticket link in links section...)

1. How old were you when you started getting involved in music and how?
We have all been playing from a young age, intrigued by our individual instruments as well as listening and appreciating our own influences.
Jacob's passion for music came alive at 14, when he was taken to Glastonbury with Nick Lowe and his family (he hitched a ride on their tour bus) which blew him away and inspired him to pursue music as a career. Charlie has grown up in a musical family, with his Dad being a musician. Sam grew up playing piano as a hobby and has never had any formal training. It all became more serious when the band was created.

2. What is the most inspiring gig/concert/festival you've been to?
We went to Latitude last year and saw the likes of Matt Corby and Foals. They were pretty insane.

3. What have you been listening to lately?
We all listen to different music, it ranges from Johnny Cash, Foals, Jerry Lee Lewis, Tame Impala, Alt J and Led Zeppelin.

1. How did the name 'Jacob & Goliath' come about?
We needed a name for a performance at the school we go to, and our mate said 'Jacob & Goliath' as a joke. We straight away loved it and have never looked back!

2. When writing, what comes first, lyrics or instrumental?
We start with an idea that we love, either instrumental or lyrics, and then build a tune from that.

3. How did you gain inspiration for 'Green' and the other tracks on your EP?
'Green' is written around a true story and experience in my life and the guilt behind a break up with a girl. A lot of our songs are written from real life experiences in our lives, which we build on in the songwriting.

If you could open a venue, where would it be and who would you have at the opening event?
We would open a venue in West London, where we were born and raised because that part of London lacks decent music venues and we had to travel far and wide to play sometimes. We would have some new up and coming acts playing at the venue and use it as a platform for people to hear new music!

'Green' Review:
Jacob & Goliath's overall sound is reminiscent of bands like Mumford & Sons, even in this stripped version of the track, there is great layers it, with guitar, vocals, percussion and keys, all complimenting each other so well. This is definitely a track that introduces the band and their sound well, it has a join in and sing/tap a long vibe to it, great for a band performing live. If it sounds this great unproduced and live, I'm sure it'll sound even better on the EP! Looking forward to hearing the whole of 'Eyes Conveyed'! 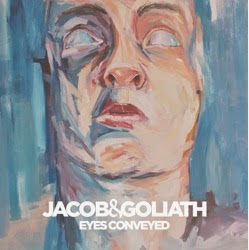 'Jubel', meaning 'cheers' and 'jubilations' in Scandinavian languages, is a song by French duo Klingande. Classed as a house and acid jazz track, it has done pretty well in the charts all over the world! Released back in September 2013 to most of Europe, it reached number 1 in Austria, Belgium, Germany, Italy, Poland and Switzerland. Now only two days after release in the UK, it's currently at number 3 in the charts. Definitely one for summer playlists, even though it's pretty rainy in the UK at the minute!

A feel good song with horns and whistles from Kelis, live on Later with Jools Holland. 'Jerk Ribs' was released on 14th February (2014) as the first single from Kelis' sixth studio album, a mix of electronic and soul music, creates this wonderful mash up of genres, that you can't help but dance to!

'Don't Stop The Music', originally by Rihanna was covered by Jamie Cullum for his fifth studio album, The Pursuit. He released his jazz version in 2010 and it became a popular track in the Netherlands. However, unfortunately his track didn't do as well in the UK.

After uploading many videos to Youtube, many with other Youtube stars, over the past three years, Alex has gained a large and hugely respectable amount of followers! She is now releasing her newest single 'Bones' from her upcoming release (which is now available to pre-order). A really enjoyably track to listen to, with strings, harmonies, piano, percussion and everything else you need to be an insane song!