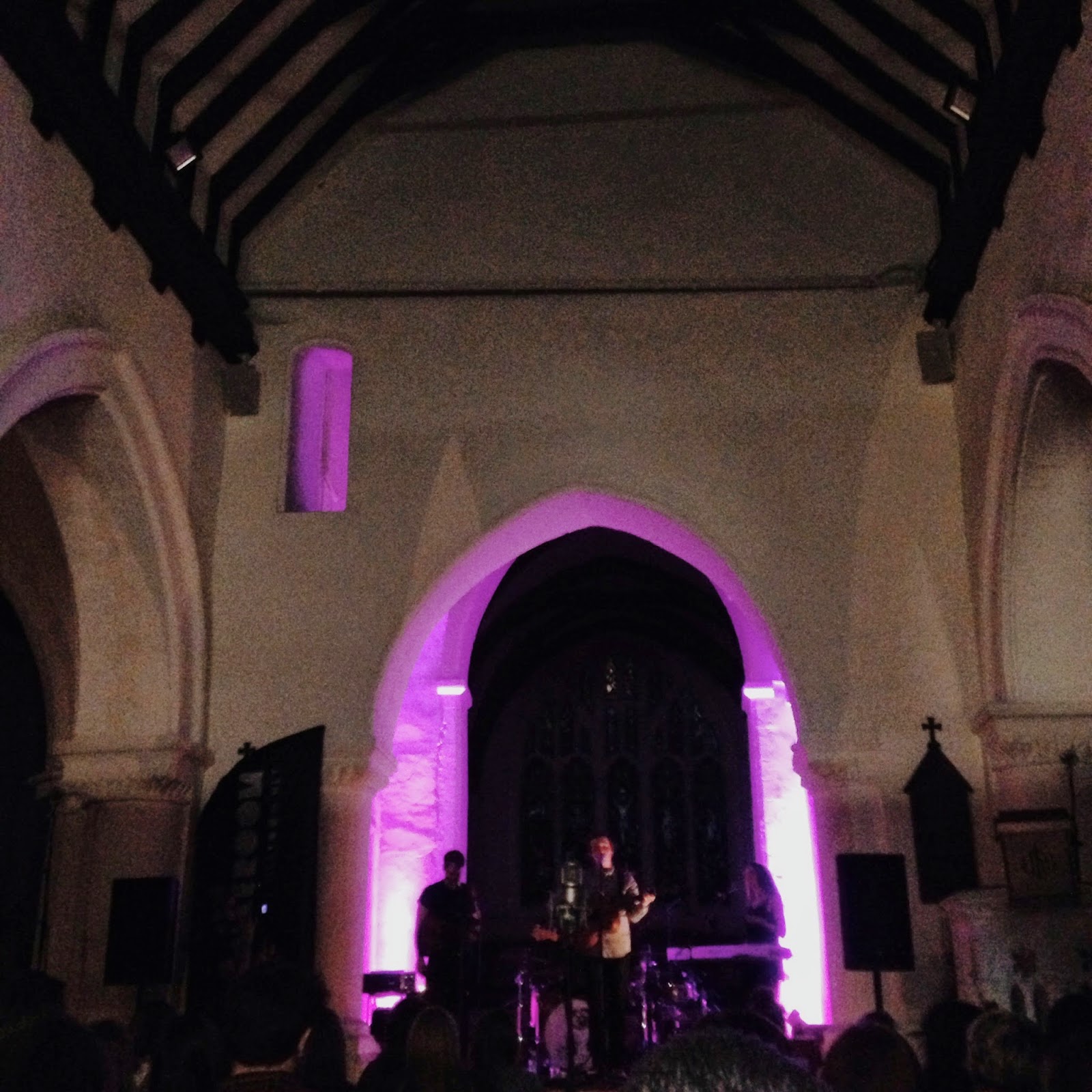 After being handed a very smart t-shirt, with a rather impressive ribs and heart image on the front and specialised line for the event, St. Mary's Church ~ Guildford. I head to a seat near the back, with a great view and I pick up the track list... It was definitely one to look forward to! I then look around and take in the setting, simple and beautiful. Pinky purple backlights, with candles and the stunning stained glass window as their backdrop. When you smell food and hear vocal warm ups, you know it's close to stage time!

Lewis' set went through his debut album's track list, the album's called 'The Morning' and is set for release on 7th July (2014). As well as performing the tracks with his band, Adam (bass), Rob (drums) and Roxanne (keyboard), he also shared the story behind each track. So without further ado, here's each track close up...

Stones Around The Sun opened the set well, introducing the overall feel of the album and atmosphere of the gig ahead. The keys were used well to start the song of, with a slow drum beat and backing vocals that build and mellow again throughout the song.

Next up was Holding On, written about the end of something and wanting to drop it. For this one Lewis and his band made their way to the middle of the audience and got everyone to stand. This was special, it was 100% acoustic, with claps, guitar and harmonies it had a general chilled feel about it, this was a highlight for me!

After that, Lewis and his band headed back to the stage and performed a previously heard track. The track 'Into The Wild' from his third EP, is about taking a chance, it seems to be an upbeat song, with percussion used heavily (not complaining at all!) with the 1st chorus totally stripped back to just Lewis, the track built up again and finished with shiver worthy harmonies.


Into The Wild - Lewis Watson (link)

Then we got to hear another new track called Outgrow, written about a strong family memory Lewis has of his childhood routine of watching Art Attack with his brother and sister, and how they grew up and apart. This track was a personal favourite of mine, starting stripped back and with an acoustic guitar and vocals from Lewis, the track grows with the drums making it impossible not to tap along to. The string style keys were also a highlight in this track.

Ghost was next, and after explaining a tweet saying 'i wrote a song today about being 'friend-zoned', he said he felt it was a bit more romantic than that. This track was filmed for Burberry Acoustic, late last year and was a popular track, I was excited to hear it live! I definitely wasn't disappointed, with a calming tone to the song, the drum beat, harmonies and overall sound was very chilling.

Lewis' single Stay followed, this track is incredibly popular and has been played on BBC Radio 1, a dream started the writing of this song and Watson described it as a 'romantic version of Tribute by Tenacious D'. The music video was directed by Craig Roberts (from Tracy Beaker, Submarine & Skins). The performance itself was pretty beautiful, the candles set the scene and linked to the music video, but the overall sound was great. Layered, with keys and bass that complimented his vocals and highlighted the lyrics, a track that builds and finished with a mini drum solo... What more could you want?

Windows came after, the oldest song from the album, the track first appeared on his debut EP. It's about getting out of old habits and specifically an ex-girlfriend who slept with the windows open, which then became a habit of Lewis'. The track started with Lewis with his guitar and gradually grew.

Then we heard Close, a track from my favourite EP of his 'Four More Songs', written about letting go and running away as far as you need to. The track gradually built after each line adding a layer each time, another catchier, foot tapping track from the EP. Also credit to the band for their impressive holds on the backing 'oohs'.

Next was definitely the most emotional and intimate track from the album, Halo, written about trying to tell someone they're more wonderful than they think they are. Lewis and Roxanne came back to the middle and for the duration there wasn't a sound but the song, which really added to the atmosphere. The track seems simple lyrically and melodically but is a stunning showcase of Lewis' musicality and penmanship.

After that was Sink Or Swim, written on a similar line to 'Into The Wild', about taking a chance, this track appears on Watson's second EP. Again, this track builds in the first verse, I especially enjoyed the cymbal builds as well as harmonies.

Castle Street was the penultimate track, similar to meaning of Holding On and set in Oxford. The keys really stood out in this track, another one that builds throughout and is definitely one to sing-along to!

To finish off, Twelve/The Morning, written about one person in a relationship being 100% content but the other person not so much. The band went and Lewis headed to the middle, it was a beautiful track to finish on with Lewis showing his guitar playing as an art. I didn't write any other notes on this track, purely because I enjoyed it so much and was left speechless.

Overall, it was a stunning show, and there's nothing more appealing than great live music in a church, it was an awesome idea of Mr. Watson's and I thank him for an amazing evening!