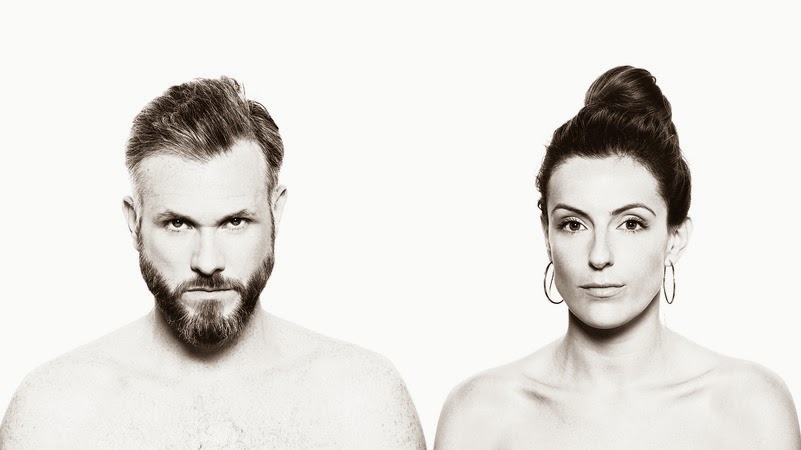 Duo, Ben Parker and Kate Aumonier, met in 2006 after hearing each other in a crowded recording studio. Both artists have had their fair share of challenges in the music industry. Ben previously found fame as half of 90s/00s folk-pop duo 'Ben & Jason', but after four critically acclaimed albums the door closed in 2004. Kate, a session singer since she was 16, had it no easier. Singing backing vocals for artists from Emmy Lou Harris to Linda Ronstadt. A record deal with Sanctuary led to a critically acclaimed debut LP and tours with James Blunt, then that door closed too. Still two determined, battle-scarred singer/songwriters with their 'Big House' EP released yesterday (2nd June) and two big live gigs coming up (6th June - Sebright Arms, London & 14th June - Strongbow Stage, Isle Of Wight Festival!)

1. How old were you when you started getting involved in music and how?
B: I was a chorister at my junior school, which was a proper old-fashioned choir school. We learned vocal technique and harmony and sang services three or four times a week. I then started playing French Horn but picked up guitar at 11 and dropped all the other stuff!

K: No definitive moment, music was always playing at home and I was choir girl of the year when I was 10 (GEEEEK) but I remember getting the performance bug when I was about 13... Seeing the reaction of a crowd for the first time ruined me forever ;)

2. What is the most inspiring gig/concert/festival you've been to?
B: I was really blown away by a Villager show at the Borderline a year or so ago. Just absolutely fantastic from every angle. Conor O'Brien is a genius.

K: Jon Brion and Fiona Apple at Cafe Lago in LA when I was 17. I was supporting them with Ethan Johns... he told me to 'take note babe... this is how it's done!' And I've been aspiring to that ever since.

3. What have you been listening to lately?
B: I love some of the Hurrah For The Riff Raff album as well as Samantha Crain, Sun Kil Moon (Clarissa is incredible) and War On Drugs.

1. How did 'Chains', the duo and name come about?
B: We were originally called The Chain after the Fleetwood Mac song. But after a while felt going plural and dropping the 'The; was a bit more grown up.

K: Quite simply from one of the greatest bands of all time (I wanna be Stevie!) Fleetwood Mac. The first song BP and I wrote together was reminiscent of them unintentionally (We were Braxton Hix at the time!). It went from there really.

2. What made you keep going with your music?
B: It's the keeping going that gets you noticed.

K: Refer to answer 1 ;-) it's in my blood...giving up was never an option! Things had been almost unbearable for a while but meeting Ben was a gift....a sign that things were by no means over for me musically.

3. What process did you go through writing 'All Up To Me'?
B: We talked at length about a certain thing we were both going through at the time (which will remain nameless) and various processes in dealing with all of the things that weigh us down and how easy it is to point the finger elsewhere and not take responsibility.  The song is about making the realisation that you're the only one who can change anything...

K: Ben and I had been going through very similar stuff when 'all up to me' came about... we realised that essentially the only one who can change things for you is you, but it's the support of others that makes you strong enough to heal... all a bit deep… I know!

Best day of the week and why?
B: Friday - we're playing a show at The Sebright Arms in London (June 6th)

K: Wednesday - it's the peak of the week! Weekend hangover has just about cleared and you're getting revved up for the next one ;-)

A lovely acoustic track with stunning harmonies and vocals from both art its, they compliment each other so well. The lyrics are very honest and one of those simple but incredibly effective tracks but with layers that make you want to join in. Really looking forward to hearing the rest of their EP, definitely one to download and listen to!

Go head to their FB page/website to find out more about their live gigs on the 6th June in London and 14th June at the Isle of Wight Festival (both will be great performances - guaranteed!)

Chart: Stay With Me - Sam Smith

'Stay With Me' is a song by British singer/songwriter Sam Smith. It was released as his third single form his debut album 'In The Lonely Hour'. It's a soulful pop track and peaked at number 1 in the UK Singles Chart.

Stay With Me - Sam Smith (link)

British electronic group Clean Bandit here with Rae Morris performing live on Later with Jools Holland. This track was released as their fifth single from their debut album 'New Eyes'. Although the released track featured vocals from Sharna Bass. Rae Morris features on another track on their album called 'Up Again' (which is very good!)

'Now' was originally released by American pop punk band Paramore. It was released back in January 2013 and became a Top 40 hit, and peaked at number 2 in the rock charts. Here the British band accompanied with Ella Eyre cover the track in a unique way mixing it a bit of Bob Marley! Enjoy!

'Orinoco Flow' was written, recorded and released in 1988 by Irish singer Enya. The song was released as the lead single from her debut album, it became a global success, reaching number 1 including the UK,  where it stayed for several weeks.