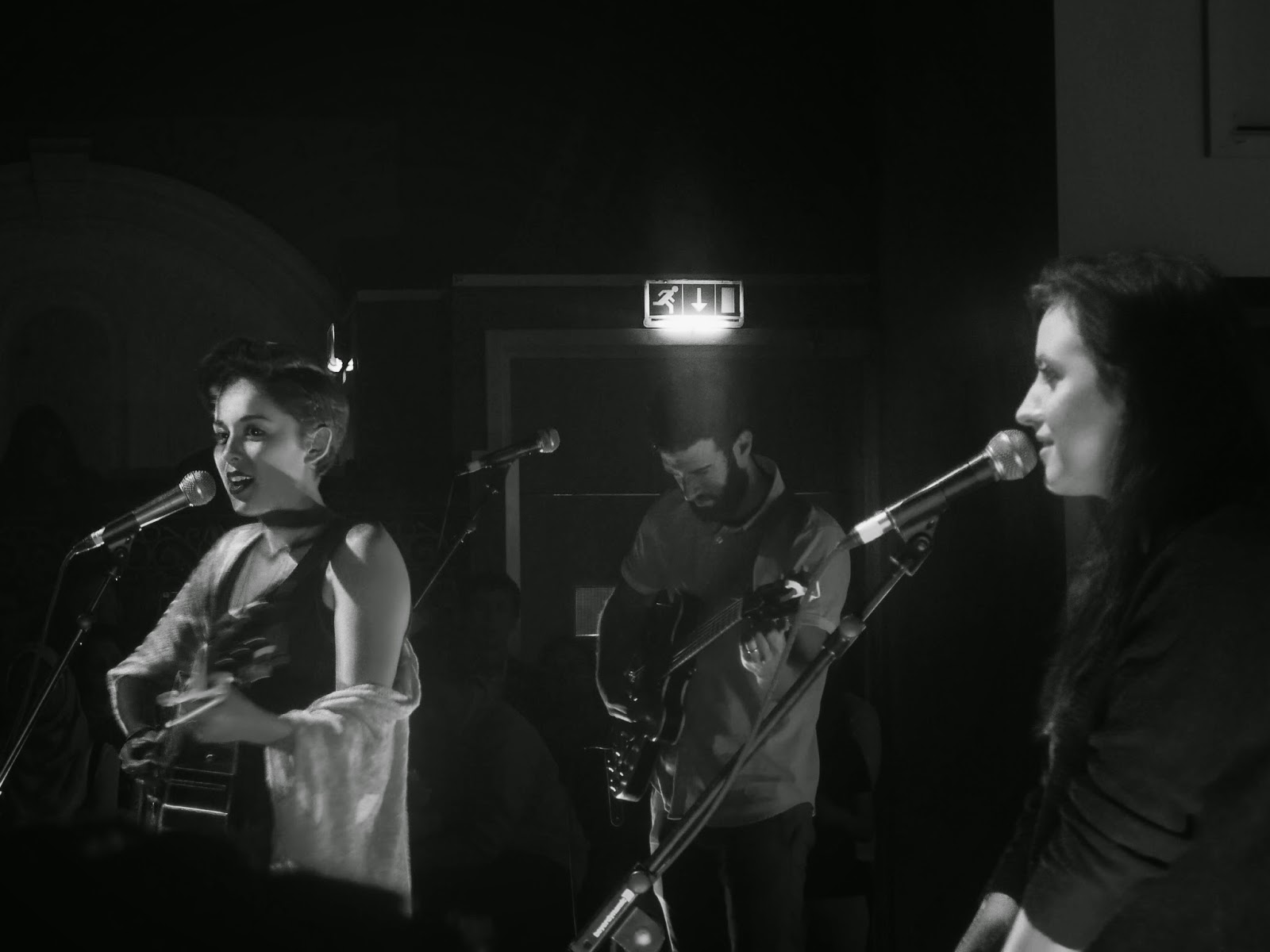 Yesterday, Wednesday 11th June, I headed to London for a much anticipated gig... After many years of waiting and watching on Youtube and then being able to listen to their albums on my iPod (on repeat), I finally got to see Kina Grannis and the previously featured Imaginary Future. It was at The Tabernacle, Notting Hill area of London and I was pleasantly surprised by the venue. It was nicely put away, and was rather small which added to the intimacy of the gig, housing over 500 people for the sold out gig.

As we went into the main theatre, Jesse (AKA Imaginary Future) was on the merch table, which was a lovely addition to the evening as it meant you could have a quick chat/sign/photo as you went in and adds to how down to earth these guys are. My friend and I found a nice spot to the side of the stage but at the front, so we had a decent view! 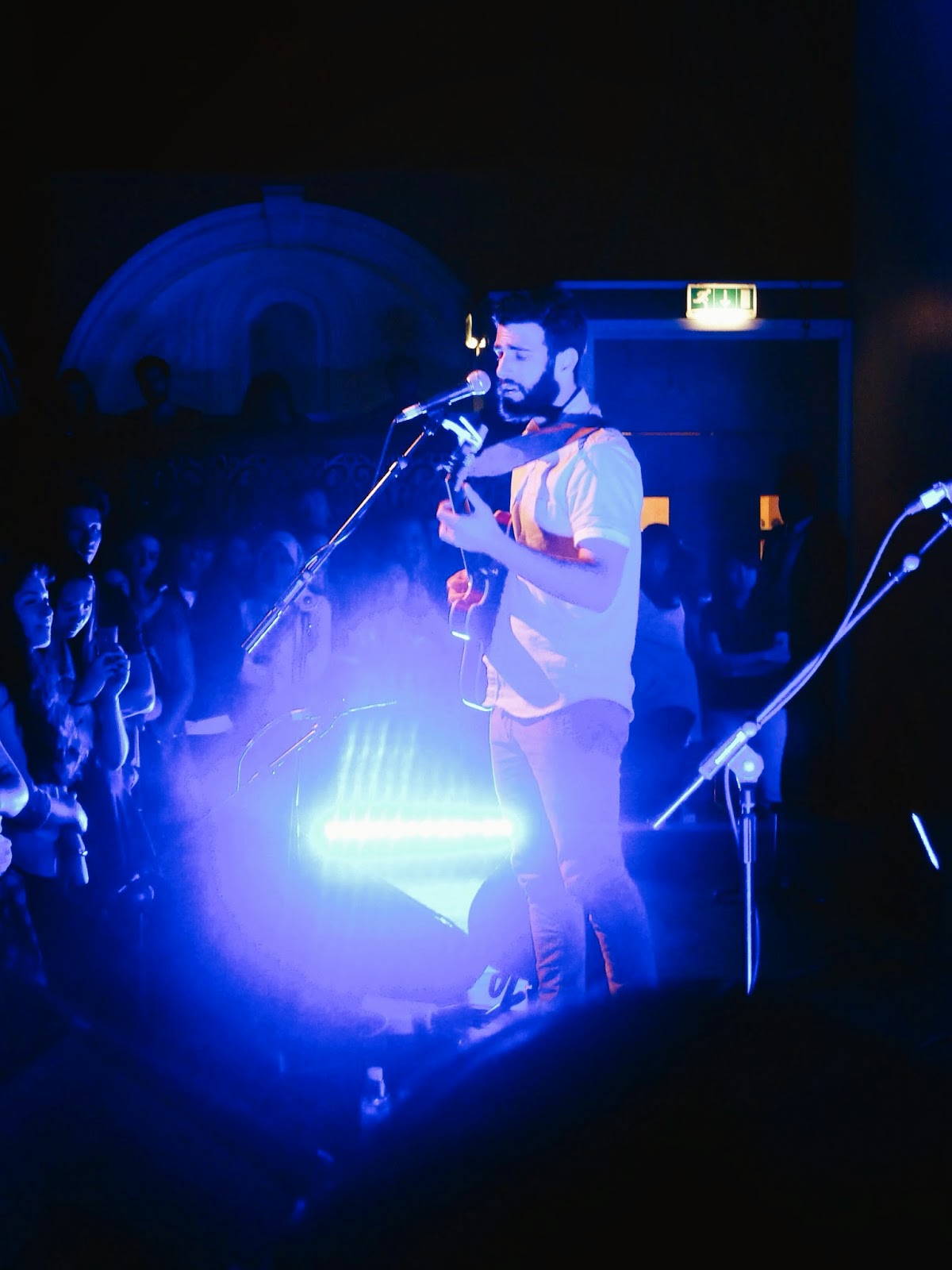 Imaginary Future kicked the evening off as Kina's support act, which I'm pretty sure everyone in the audience was happy about! He definitely had a warm (and loud) welcome to the stage!

Jesse opened with 'Fire Escape', my all-time favourite track of his, and I instantly knew his set wasn't going to disappoint! This track is usually an overall chilled vibe with spine-chilling vocals, but performed live just adds to the intense but relaxed tone of the track.

Next, he performed 'Nothing Alone', which he performed with a rockier feel, really getting into the song with his electric guitar. An upbeat track which forces you to tap and nod your head to. (As a side note - this track has a very interesting music video, with an unlikely story told throughout...)

After that bouncy track, Jesse slowed it back down with a cover of 'Team', originally by Lorde. Imaginary Future, Kina and Emi Grannis (one of Kina's sisters) did a group cover and uploaded it to Youtube. However, Jesse showed just how blissful his vocals are, incredibly easy to listen to and pleasing to the ears.

'Love Is The Beginning' followed and was the happier song of his set, a track about the beginning of a relationship. This song got the audience clapping and joining in, which was really wonderful and added to the 'togetherness' tone of the track.

Next came 'Chasing Ghosts', an incredibly emotionally intense track with a melancholy tone to the guitar too. With heavenly vocals that compliment the emotionally crafted lyrics, adding to the atmosphere of the track.

Jesse finished with 'I Knew This Would Be Love', another chilled and emotionally filled track. Personally, I felt this was a great choice of song to finish on, it summed up his set so well, an emotional, chilled one, with hope in the lyrics too. 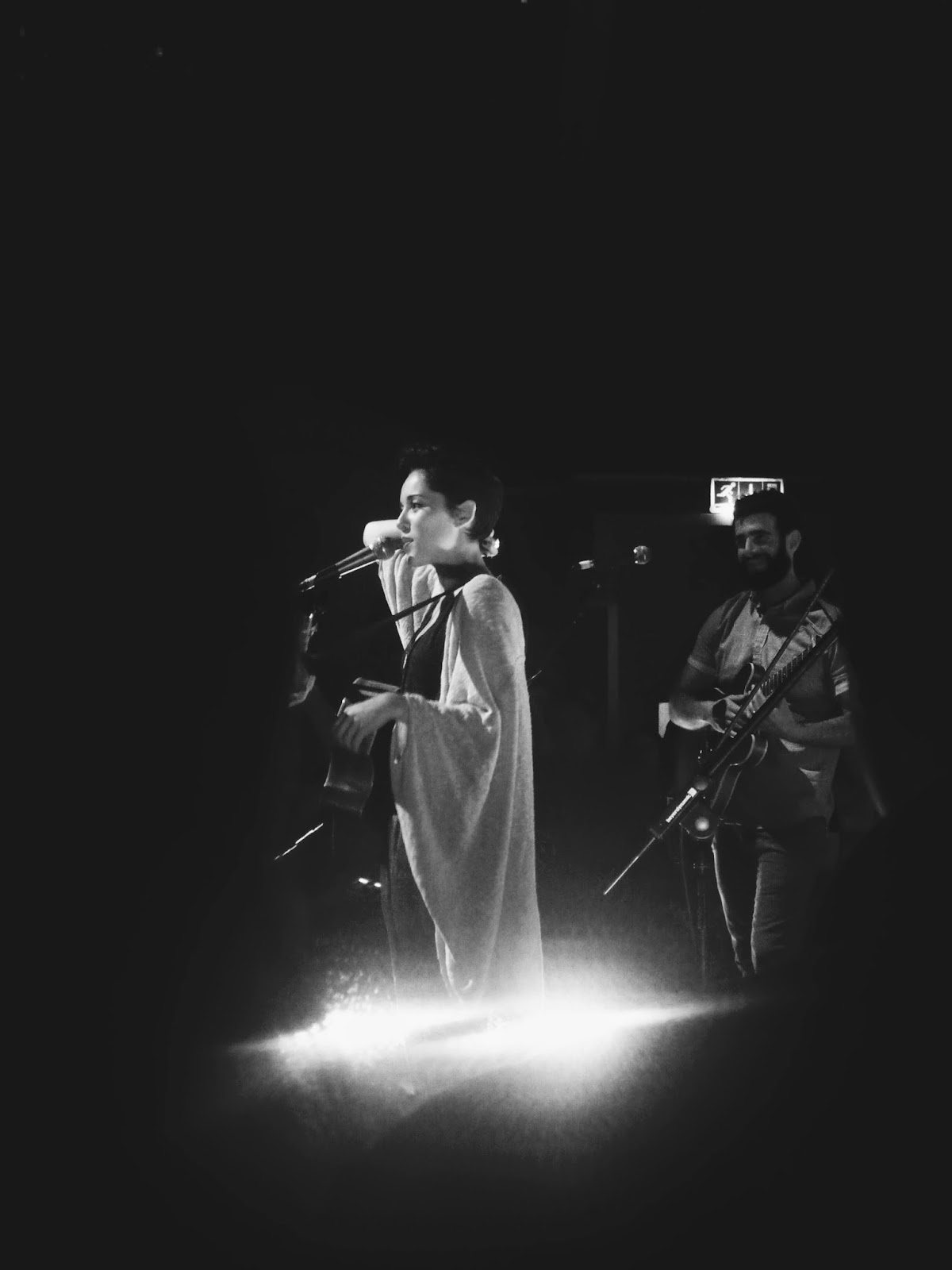 With only a small space of time to swap over, Kina came to the stage with Imaginary Future as her backing. Starting promptly with the single from her album 'Elements', 'Dear River', a great track to start with... Catchy, upbeat and definitely one to sing-a-long to!

After a quick hello, Kina moved onto 'The Fire', another great track to sing-a-long to! The guitar really adds to the vocals of this song. Some of the vocals hit heavenly notes, and really showcased Kina's vocal range.

Kina and Jesse were joined on stage by Meadowlark's Kate McGill, which was a huge bonus to the evening! 'Oh Father' came next, almost 'moody' guitar in this track adds to the lyrics, 'a darkness so immense' and 'no victory to show'. Harmonies were on point in this, all of their voices complimented each other so well!

'Winter', a song originally started about withering flowers came after. Again great harmonies and vocals adding to the chilled and almost magical feel of this track. It really did sound delicate, just like the subject of the song I guess, but the vocals grow throughout to the chorus. 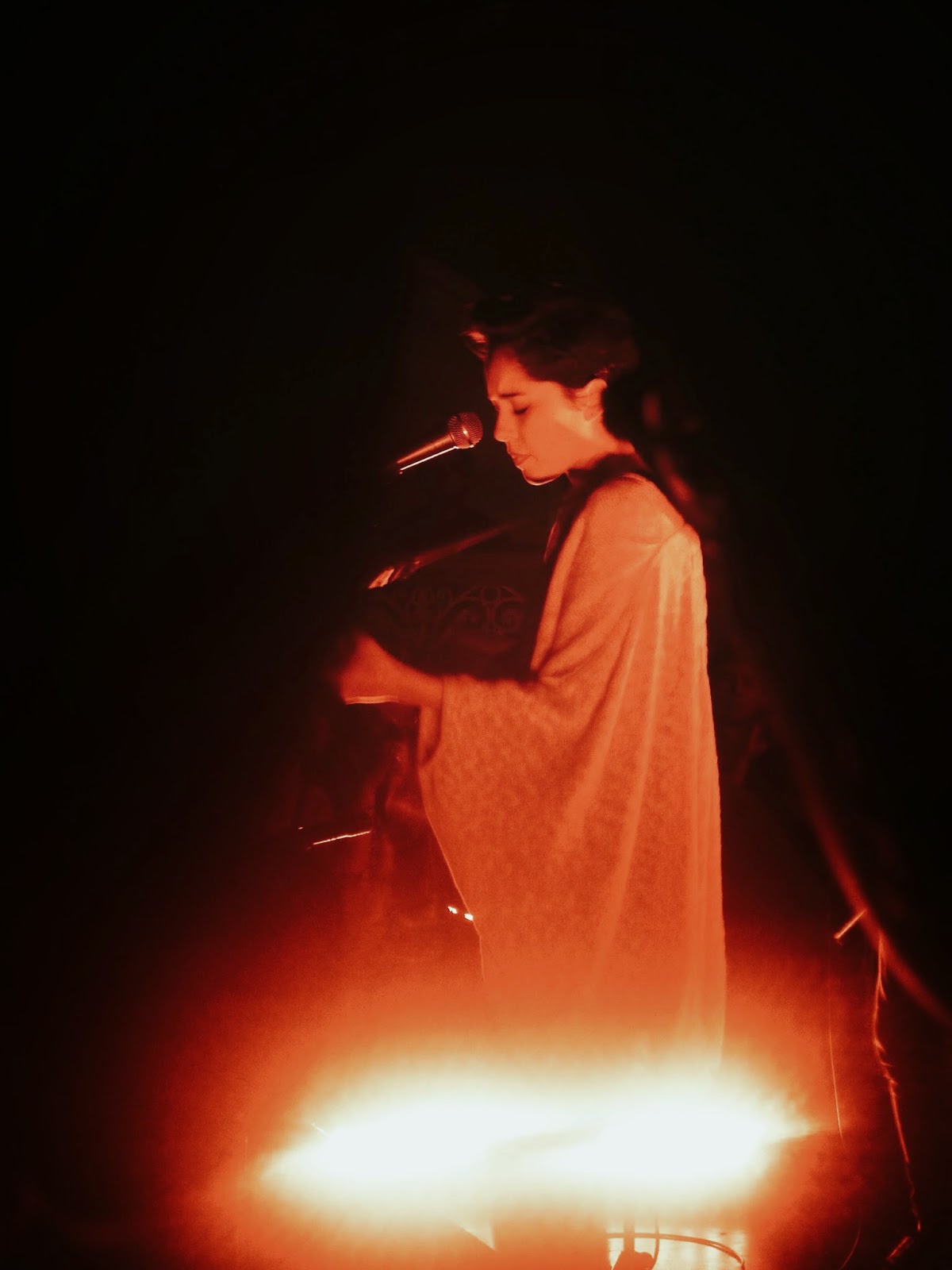 Next, 'Throw It Away', a faster, rockier track compared to the previous two. Starting intense and dark, it builds to a definite tap-along song, the electric guitar really went well with this track, helping that intense feel of the song.

'My Own' followed, written about family and usually performed with Kina's two sisters, Emi and Misa. The warm vocals and harmonies adds to the togetherness of the song. A slow song but definitely one to put a smile on your face (mainly because Kina and Kate's voices together would make anyone melt, then add in the lyrics and soft guitar...)

After came 'Valentine', a positive bouncy track, one that was sung a long to, very loudly! I really enjoyed the acoustic vibe of this song, it also fits the surprisingly sunny weather we've been having in England the past few days!

Back to an emotionally filled track, with deep, honest lyrics 'Forever Blue'. One of my favourite songs from the album, I feel I relate to this song a fair amount and have listened to it a lot recently! One thing I liked about the performance was that Kina didn't cut out the emotion behind the song, she let it add to the atmosphere.

A little break filled with random (and weird) sounds from the crowd, and a group photo. Then it was onto 'In Your Arms'. This was a happier and loud sing-a-long song, the music video for the track used 228,000 jelly beans over 22 months, and is pretty impressive! Another good summery song as well!


In Your Arms - Kina Grannis (link)

'Little Worrier' followed, writing the song was sparked by a mouse's footsteps that Kina thought was a murderer in the woods... understandable when you're on your own and left with your imagination!) Again, a slower track with guitar that compliments their vocals incredibly well. The lyrics stand out in this track and added to the performance, which seemed pretty intense again.

Next was 'My Dear', with a slow start that built into a foot-tapping track. The crowd joined in clapping and managed to just about keep in time. It was a great one to 'finish' on, all the layers of the song seemed to sum up the 'Elements' album and Kina's set, with slow, subtle, emotional sections and then happier, upbeat parts too!

Finishing on 'The One You Say Goodnight To' made it a happy ending. Another cheery and upbeat track and one I hadn't heard before, but it's a new favourite!

Kina and Jesse stuck around for a meet and greet after the gig, thank you very much for a lovely evening, and allowing my ears the pleasure of hearing your voices, definitely want to see them both again!