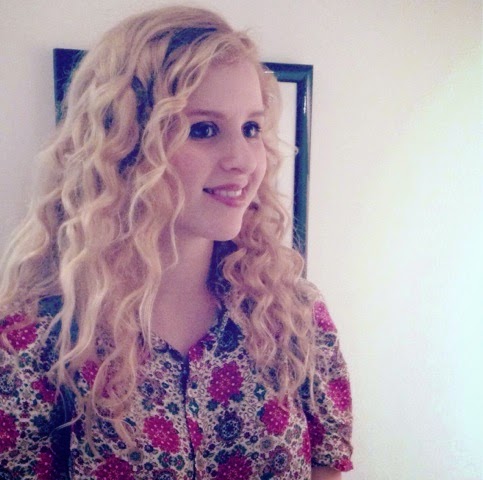 Hannah Grace is a 21 year old singer/songwriter from South Wales. After supporting Gabrielle Aplin on tour in 2012, Hannah was invited back on tour in 2013, this time as backing vocals too. Now releasing her debut EP 'Meant To Be Kind' on Gabrielle's record label 'Never Fade Records'. Hannah worked on this EP between studies at The Royal Welsh College of Music and Drama. The music video for the title track recieved an impressive 10,000+ views in it's first week.

1. How old were you when you started getting involved in music and how?
I've been singing for as long as I can remember! My Dad is very musical and always encouraged me to sing and play instruments. I played and performed with him a lot when I was growing up!

2. What is the most inspiring gig/concert/festival you've been to?
I've seen Elbow a few times now, and I think they are amazing live! The energy they have for performing is inspirational and their concerts are very memorable.

3. What have you been listening to lately?
I really love Hozier. His voice is so distinctive and his songs are very powerful. I can't wait until he releases an album!

1. You've supported Gabrielle Aplin, many times on tour, but who would be your dream artist/band to support and why?
I would love to support Paolo Nutini. I was lucky enough to see him in concert a couple of years ago and was blown away by his voice and he always has an incredible band. It would be amazing to open for an artist like him.

2. What influences your lyrics and who influences you musically?
Anything can influence my lyrics, from my own personal experiences, experiences of friends and family or something going on in the world. I have so many different musical influences but my earliest inspiration is Eva Cassidy - I could never tire of listening to her voice. I also love songwriters like Paul Simon and David Grey, and adore the voices of Billie  Holiday and Ella Fitzgerald. More recently however I have been hugely influenced by Hozier, Paolo Nutini and Michael Kiwinuka.

3. Have you got a favourite track from your debut EP 'Meant To Be Kind', and if so why is it your favourite?
My favourite song changes every day, but at the moment I really like the song 'Broke'. I really enjoy singing it because I feel like I can make it different each time.

Favourite book and why?
I think it would have to be 'A Thousand Splendid Sons' by Khaled Hussaini, the story stayed with me for a long time after reading it, I was really moved by the women's struggle portrayed in the book.

'Meant To Be Kind' EP Review:

This is a stunning debut EP, it really shows what Hannah is capable of, which makes me excited to hear more music from her in the future! 'Meant To Be Kind', the title track has a traditional sounding start, which builds into a powerhouse chorus. A catchy tune, the perfect track to use as an introduction to Hannah's music. The next song is 'Broke', which was the free single of the week on iTunes recently. It has a chilled beginning, however it grows into a stunning soulful song. 'Walk Away (The City)' comes after, with a steady drum beat and progressive percussion intertwined adding to the track. This one reminds me a little of Duffy, and is yet another amazing song! Last is 'Chasing Butterflies', with a slower, more melancholy mood to the track. With beautiful imagery in the lyrics starting the song off, continuing throughout. Overall, a stunning EP, which showcases Hannah's musicality and penmanship, vast vocal range and ability to make mind-blowing music!

Chart: Me and My Broken Heart - Rixton

'Me and My Broken Heart' comes from British group, Rixton. The track was released on 14th March (2014) as the lead single from their upcoming debut studio album. The song samples 'Lonely No More' by Rob Thomas - who worked on the track. It's doing well in the charts and has caught lots of attention, peaking at #1 in the UK Singles Chart.

Me and My Broken Heart - Rixton (link)

'Only Love' from English singer/songwriter, Ben Howard, came from his debut studio album, 'Every Kingdom' (a very good album). It was released in May 2012 and peaked at #9 in the UK Singles Chart. Here is his live performance of the track at this year's T in the Park, held in Scotland. (WARNING: FLASHING LIGHTS IN VIDEO BELOW)

Cover: Give Me Love - Demi Lovato

Originally by Ed Sheeran, 'Give Me Love' was released as the sixth and final single from his debut studio album '+'. It peaked at #18 in the UK Singles Chart, surprisingly not following the success of his previous singles. Here the American actress and singer, Demi Lovato gives a rather moving and powerful performance of her cover.

Give Me Love - Demi Lovato (link)

'Stan' was the third single from The Marshall Mathers LP, recorded in 1999 and released in December 2000, the track peaked at #1 in the UK Singles Chart. It samples 'Thank You' by Dido as the chorus and is suggested by many as Eminem's most popular and well known tracks. It's also been included in  Rolling Stone's 500 Greatest Songs of All Time list. (WARNING: explicit - of course it is - it's Eminem!)