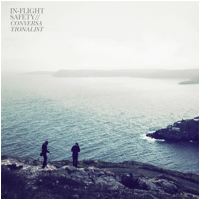 In-Flight Safety are a melodic indie rock band from Nova Scotia, Canada. Familiar with SXSW, NXNE, The Great Escape and BBC Radio Sessions, their music is being enjoyed in growing areas of the world. Their music has also been used in film and TV; notably 'Vampire Diaries' and 'The Office US'. They have exciting releases coming up: 'Animals' is their forthcoming single from their upcoming album 'Conversationalist', which will be released later this month, alongside a tour around Canada, Germany and England.

'Conversationalist' Review:
This album is brilliant from track one to the end, I wouldn't say there is one song that I want to skip. 'Conversationalist' starts with a short intro, which is instrumental and creates a great atmosphere. Throughout the rest of the LP, there is a good collection of guitar riffs, drum beats and vocals, all accompanying each other very well. There are also more chilled tracks, 'Caution Horses' and 'Crowd' mixed with songs that grow and build into catchy upbeat tunes 'Destroy' and 'Fight Night'. Highlights of the album for me are the lead single 'Animals' and 'Stockholm'. The band's sound is unique but also seems reminiscent of Young The Giant - definitely not a bad thing!

Chart: Shake It Off - Taylor Swift

This is the latest single from Taylor Swift, the American artist, being released as the first single from her forthcoming fifth studio album '1989'. It's a catchy uptempo track and moving slightly away from Swift's usual genre of country pop, the music video has caused a lot of controversy, but it's leading the way in the charts, peaking at #4 in the UK Singles Chart and #1 in the US Billboard Hot 100.

Shake It Off - Taylor Swift (link)

Chandelier has been a massive hit for Sia, doing really well in charts all over the world. This track is the lead single from her sixth album '100 Forms of Fear' (which may I add is one of the best albums I've heard this year). This is the live performance that I found most powerful, vocally and performance wise - however, the performances on Jimmy Kimmel Live and Late Night With Seth Myers, were both brilliant adaptations, but here is Sia performing 'Chandelier' live on The Ellen DeGeneres Show recreating the music video.

Pentatonix are one of the most popular Youtube acapella groups and they have surpassed their previous videos with this incredible cover of Ariana Grande and Iggy Azaela's 'Problem', which is another track that did very well in the charts, this video shows how you really don't need instruments or loads of technology to create an well-layered track, enjoy!

'Hotel Califronia' was released as a single in February 1977, the title track from The Eagle's album of the same name. Many people of have covered and parodied the well-known song including Marilyn Manson and Frank Ocean, and the album peaked at #2 in the UK Albums Chart #1 in the US Billboard 200.