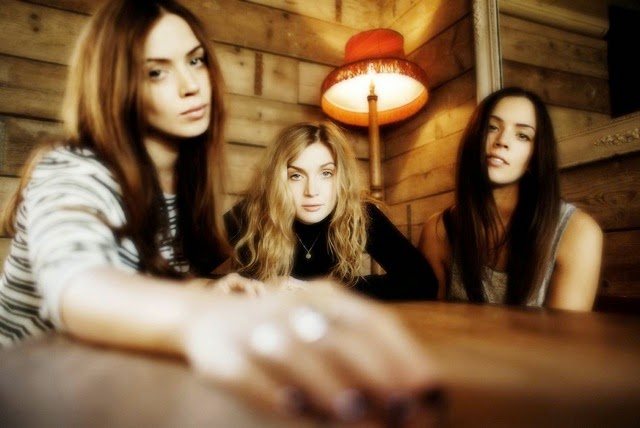 Three sisters, Jane, Cat and Ruth make up Jagaara, the upcoming trio from North London. Their sound includes a mix of folk, rock and electronica built with layers of Jane's vocals/guitar, Cat's keys/synths, Ruth's guitar and their group harmonies.
They've just been on tour in support of their debut track 'Faultline' and played a set to a packed out tent at Latitude Festival in the Summer. Jagaara have also just announced a show at The Shacklewell Arms, London on 18th December, definitely one to go and see.

Here's something a little different, I went to see Jagaara on Wednesday at Old Blue Last in London and did a face-to-face interview, so enjoy!

1. How old were you when you started getting involved in music and how?

C: We started playing instruments when we were really young. We all started playing the piano when we were about five and we were always into music when we were growing up. Our dad has a really big record collection so our tastes were quite old school back then. Then when we were in our teens we all started picking up different instruments and it all grew from there. You could say if you count the gigs in our living room then that’s years and years and years, but it only started properly, two or three years ago.
We got a residency at Ronnie Scots and we found ourselves a drummer and bassist through a friend of ours and they’re still our guys now, they’re like our brothers. Then it all came together because we had all these upbeat songs that we couldn’t really do live because it was just the three of us with guitars and stuff but then we could arrange everything properly with them and that’s probably where it started.

2. What is the most inspiring gig/concert/festival you've been to?

J: I went to Field Day and I saw Blood Orange and they were pretty cool, really amazing.
C: One of my favourite bands I've seen live is Warpaint, I love watching other female musicians, especially ones in bands, they’re incredible. Their chemistry and energy is amazing.
R: I saw James Blake at Pitchfork Festival two weeks ago and that was the best I’ve ever seen him. I’ve watched him a lot but that was definitely the best, it was incredible.  He had all his new songs, it was so good!

R: Robyn, we’ve been listening to a lot of electronic stuff. We like to mix all kinds of standard band set up with electronic sound and it seems a lot of people are managing to do that at the moment and that’s really inspiring. We listen to FKA Twigs and a band called Movement from Australia who are amazing and really soulful but with loads of interesting synth sounds. Blood Orange as well, bit of Jack Garratt he’s good, oh Tune Yards, they’re so good, it’s weird kind of African mixed with electronic and folk, you can’t quite work out what it is, which is nice sometimes.
J: There’s also a guy called Paul Thomas Saunders, quite dark, slightly folky but then also a bit standard rock, it’s really good. I haven’t seen them live, but I really want to.

J: Going back, Kate Bush for inspiration for lyrics, some of her lyrics are really other worldly and ethereal, we wouldn’t really put that in our stuff today but it's the fact she goes to places we maybe wouldn’t focus on. Then there’s all the ones we’ve just mentioned. Love Led Zeplin as well and then Nick Cave lyrics wise again, he makes beautiful phrases and the way he draws from stuff like nature, weather, religion and everything. All those basically and more.

2. Being sisters do you have specific roles within the group (e.g. a bossier one etc.)?
C: Yeah I’m quite bossy. Ruth’s, I don’t wanna put it in a bad way, but Ruth never checks her emails.

R: I’m not very good at admin, I like the gigs and the parties after, but I’m more of a night person.
J: But then Ruth also wants to always find or learn something new on the electric guitar, something different, like pedals, for if we’re looking for a new sound.
R: Yeah I’m very geeky
C: I think musically, Ruth started doing production when she was in her teens at college, so we had a home set up, so when we recorded our demos, Ruth would record them. Then I recently got Ableton, that helps us live, because it means we can reproduce these synth sounds, so I’m learning that for that side of things as well and Jane’s more into the writing side.
R: I would say Jane was somehow slightly illusive, with a slight air of mischief. You come out with things and I’m like where did that come from? It’s great, it’s really entertaining so… Jane’s the surprising one.

3. Did those roles affect your creative process for the track 'Heartbeats'?

C: One of our friends produced it, he's a guy who’s really talented and he’s been helping us with other stuff as well, he's called Reuben. Jane wrote most of the melody and lyrics, then it was with him and once we recorded it we went and changed some things, then worked on it with him. That was interesting, because I think it was a time where we needed to experiment with other people and see what other ideas we could bring in.
I think on that song especially we realised how into electronic music we are. Where we were a three piece for a long time, we were doing more folk/rock kind of stuff which we still really love and still do now. But it was then where the direction changed and it was a time where the song guides you to what sort of style it would be and we just thought we’d go a lot further than normal. But how electric it went, seemed to work, it seemed to compliment the other song ‘Faultline’ so that’s why we released them together.  To show two sides of what we do at the moment.

If you could go anywhere on a road trip, where would you go, why and what would be your soundtrack?

J: I’d probably go skiing, a road trip to a ski resort, because I like snow and I like cold weather sometimes.
R: I think, basically we all wanna go to Scandinavia because we’ve never been and we're quite interested in the culture and music over there and the lifestyle, everyone seems happy and creative.
R: We’d probably like to go to Sweden or otherwise Berlin because we have all heard amazing things about Berlin, music, scenery everything like that, with groundbreaking artists there, really wanna go there together and do a gig there – we should probably book that.
C: Then soundtrack, if we’re going to Sweden and Berlin, we’d play Lykke Li, our favourite Swedish artist.
C: I’d also love to do an American roadtrip, that would be amazing, some of our friends did Austin to Boston, with Communion Record Label and they just had VW’s, driving all the way through. It just looks incredible, so that would be amazing. I guess if you were there you’d have to bring all the old American classics like Fleetwood Mac, Neil Young.
J: Prince
C: In our tour bus we listened to Jimi Hendrix, Jeff Buckley, it was quite old school, driving music.

I had a good journey up to London and the venue is easy to get to via the tube (when the lines are running smoothly). Before I went in to the venue, I had a chance to walk around the surrounding area and take in the character of Shoreditch. After a coffee, I headed back to the venue, The Old Blue Last, which looked impressive from outside.
Inside was a bar, full of people, loud music (maybe a bit loud if you wanted to chat to someone..) but there was a great atmosphere.
Venture upstairs to the 'Gigs/Club Nights' room, a smallish room with a good view no matter where you were stood (even for a short person like me!) Also, as a side note, they chose some really good warm-up music for before the support artist came on stage.

The support artist for Jagaara was Fred Page, his evening didn't seem to be going too well. He'd turned up for his soundtrack with an empty guitar case. However, his set was brilliant. Strong vocals, great guitar and well written, honest lyrics, which created a standout sound, which me me a little of Billy Lockett. All the songs he performed were originals and a mix of old and new songs. He was full of excuses for a 'bad show' from him, but I thought he was great and I really enjoyed his songs. They created a chilled vibe, which had everyone in the room listening.

Jagaara started strong with an upbeat track and harmonies, I knew then that I was going to enjoy their set. They then performed 'Heartbeats', the building layers of guitar, drum and percussion beats, keys and vocals created a definite atmosphere for the song.
'California', a sunny song about a break up came next, which started slow but grew into a rockier track, which was really great.
The girls then shared some brand new songs (that even their parents hadn't heard). I really enjoyed 'Better', a track full of percussion, keys, harmonies, solid vocals and seriously good guitar from Ruth.
After another love song, was 'Faultline', their debut track, which had a great reception and was atmospheric and just generally amazing live.
They performed what they described as a break-up song, which was a little more chilled than some of their other tracks. Again all of their specialities in the group fit together perfectly and allow each member to stand out at different times.
The last they played was 'Marble Arch', I loved this one and it was clear that so did everyone else, it got us clapping and moving along.
Overall, a brilliant evening listening to them live. Ruth's ridiculous rifts on guitar, Cat's stunning synths and keys, Jane's powerful and emotive vocals with the boys, Tom & Glyn, on bass and drums too, just made a sound that works so well live as well as recorded. It was good to see a varied audience enjoying their music as well as the band enjoying themselves on stage too. Thank You!