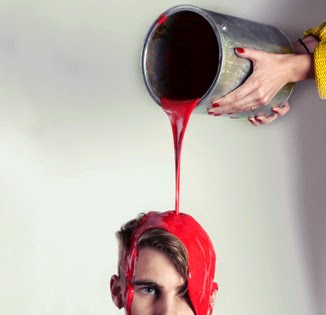 Having grown up in a studio in Scotland, surrounded by music, Mo Evans is a brilliant upcoming singer/songwriter. After growing up with music from family and skilled musicians around him, he started his own musical journey. He was introduced to the drums, aged six and three years later he chose to learn guitar. He moved to England with his mum, joined a band and grew a love for performing. In the last year, Mo has been gigging in London, as well as going on European tours and warming up for Bonnie Tyler at Silverstone. Now it's time for his debut EP 'Spilling My Love' and it's one to be excited about!

1. How old were you when your started getting involved in music and how?
I think I realised I wanted to be a musician when I was around 6, however, I was born and raised in a music studio so I've been around artists and bands and musicians for as long as I can remember!

2. What is the most inspiring gig/concert/festival you've been to?
Wow, that could be any! From Dry The River at Reading Festival, to watching my kiwi folk friend in Scotland play around a bonfire. Bestival was also pretty inspiring this year. I really should have a notable gig or fezzy, but the truth is I think I come out just as inspired every time when I watch someone I like!

3. Who have you been listening to lately?
Well, my favourite albums recently have been Ben Howard's 'I Forget Where We Were', or 'Rumours' by Fleetwood Mac and Bombay Bicycle Club's 'So Long, See You Tomorrow'.

1. You've already learnt to play drums and guitar, but what other instrument(s) would you like to play and why?
Hmm, I've always wanted to play harmonica, and I practice from time to time. I'd say my friend Brendan Power put me on to that one, he recorded with me a few years ago and he is definitely the best harp player I'll ever see, since then I've always wanted to play it. Violin is another, and that's just because of how beautiful it sounds.

2. If you could invite any three people to one of your gigs, who would you choose and why?
I could think about that question and answer with my biggest idols or someone prestigious and fabulous. But my initial thought would be my Mum, my Dad and my sister. No particular reason other than that is who I'd like to play to most! If I were to think about that question it would probably be Jeff Buckley, Stevie Wonder and Lou Reed. And that would be so I could say Jeff Buckley, Stevie Wonder and Lou Reed came to see my gig.

3. Have you got a favourite track from your debut EP 'Spilled My Love' and if so, why is it your favourite?
I'd say the last track on the EP 'You Wanted Love' is my favourite. Out of all 4 songs, I think I enjoyed recording and writing that one most, and I revisit that feeling when I listen to it.

The title track, opens the EP with great guitar, adding cymbals to build into vocals, stunning vocals similar to Andreas Moe and Hozier, the song grows with a beat and violin and includes catchy builds and gospel-style backing.
The second track is 'Close My Eyes', starting stripped back acoustic, intensifying with piano into a powerful track, and is pretty wonderful.
'Can't Come Any Closer' is the third track and oh boy, the harmonies, percussion, piano, guitar and vocals compliment each other so well, Mo clearly knows how to put good songs together.
The EP finishes on 'You Wanted Love', the sound of fire and breathing at the beginning of the song, with slow piano, it's has a chilling atmosphere about it, reminding me of Benedict. The slowness allows you to really focus on the well-written, honest lyrics and then the song turns with introduction of strings and percussion, turning rockier for the last minute.
Overall, a brilliantly pieced together EP, one that pushes Mo into my 'future stars' list. He manages to create such a unique sound whilst having hints of many successful artists, Hozier, Ed Sheeran, Benedict and Andreas Moe. (I've also had it on repeat for the last couple of days, and haven't got bored of it!)

'Up' was released on 1st December 2014, as the second single from Olly's fourth album, 'Never Been Better'. It also features on Demi's deluxe version of her fourth album 'Demi'. This track has peaked at #4 in the UK Singles Chart and hopefully goes even further up the charts (excuse the pun!).

Saint Raymond has been featured on many '... 2015' lists amongst the music world and hopefully 2015 really is his year. Here's a great funked up and rockier performance with Transmitter, of his song 'Young Blood', which was the title track from my favourite EP of his. (Which you should definitely check out!) The guitar riffs, drums and lyrics will get you tapping your feet and nodding your head.

I stumbled across this the other night, and honestly, couldn't have been happier about finding such a stunning, haunting, atmospheric cover of one of my favourite songs. All I can say is just listen to this cover and subscribe to him over on YouTube. (Evan's YouTube channel)

Classic: All The Small Things - Blink 182

'All The Small Things' was the second single released from Blink 182's third album 'Enema of the State'. This pop-punk track easily features in my all-time favourite songs and was a favourite for others too, peaking at #2 in the UK Singles Chart and #6 in the US Billboard Hot 100. To me and many of my friends this is a singalong classic.