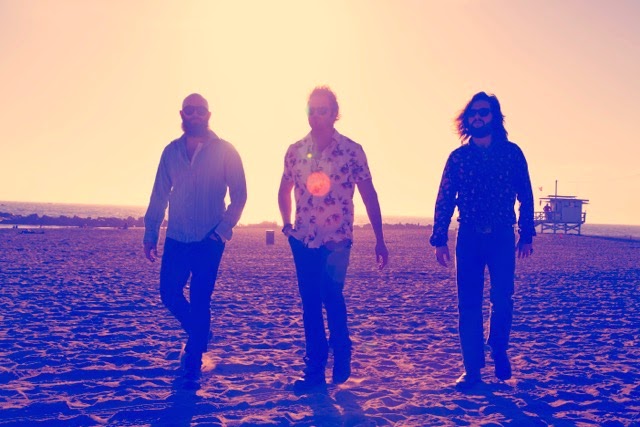 The Rebel Light are an indie pop trio from Los Angeles, comprised of two brothers and their cousin. Their new single 'Strangers' has already started turning heads on both sides of the Atlantic. Self-produced by the talented trio, with vocals being recorded in their bathroom and the drums in their woodshed, this single is perfect for shaking off the winter blues. If you're a listener of The Shins and Temples, you're bound to love this sun drenched sound of 60s California pop.

Well, first of all I can understand why The Rebel Light are doing well over in the US and hope their success transfers over here too. They resemble The Shins and Temples, but I hear them as a modern day Kinks. The lyrics of the song and accompanying music video go hand in hand and tell a story well, which is always appreciated in a song. As well as this the synths, guitars and beat intertwine and create an upbeat indie pop/rock vibe perfect for welcoming Spring and Summer. I'm also struggling to get the catchy choruses out of my head, which is always a good sign of a brilliant song!! Can't wait to hear more from these guys, definitely ones to keep your eyes and ears on!

The British-Australian electropop trio, consists of keyboardist Olly Alexander, bassist Mikey Goldsworthy and synth-player Emre Turkmen. The last couple of months have seen Years & Years grow and gain an audience via support and plays on Radio 1, winning BBC Sound of 2015 and being nominated for Brit's Critics Choice Award 2015. Their latest single 'King' went to #1 within a week, 2015 has a pretty good start for the band and they're not finished there!

'Bloodstream' comes from Ed's second studio album 'x' and was written by Sheeran, Rudimental and Snow Patrol members, Johnny McDaid and Gary Lightbody. Rudimental have also done a remixed version of the track (which did better than the original in the charts, however, nothing ever beats Ed and his loop pedals live, so here he is doing his thing at the Brits at the end of last month, the same night he picked up Best Male Solo Artist and Best Album of the Year.

Cover: Take Me To Church - GUN

Glaswegian five-piece rock band GUN have recently covered Hozier's hit single 'Take Me To Church' and even though this song might be being covered and played to death, this one stands out from others by far. They released it alongside the announcement of a series of special fan events to support their forthcoming album 'Frantic'. (Those dates can be found here.)

Take Me To Church - GUN (link)

Previously featured Jake Isaac is back with his new EP 'Where We Belong', which has been released on Elton John's 'Rocket Records'. He's also just announced a headline show at London's Barfly on April 21st and I can assure it will be a good show. 'Fool For You' is one of four great tracks on the EP and is a well layered and put together track, accompanied by a just as great video. You can download the EP here.