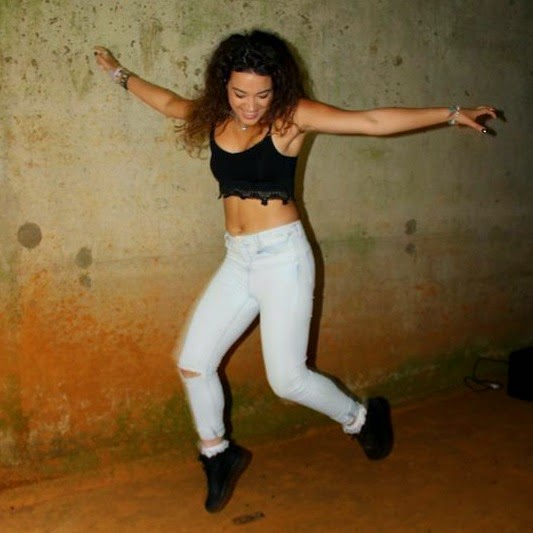 Sarah-Jayne is a young and talented singer/songwriter from Surrey, England. She has been uploading covers and originals to her YouTube channel and Soundcloud page for over a year and has also released an EP called 'Sunshine'. Having played at venues such as Proud Camden, Boston Music Room (London) and The Boileroom supporting Ben Montague, as well as filming a session with 'Ont Sofa and currently writing new material, the future is looking incredibly bright for Sarah-Jayne.

1. How old were you when you started getting involved in music and how?
I started playing the guitar when I was eight years old. I watched the School of Rock and absolutely loved it... When I was 10 I realised I could sing and then a year later started writing my own songs.

2. What is the most inspiring gig/concert/festival you've been to and why?
The most inspiring concert I've been to is The 1975 concert at Brixton Academy in 2014. They put on an amazing show by just doing what they love, and it really was all about the music. It gave me such a huge adrenaline rush and really inspired me to follow my dreams as a musician. I felt like they had such an incredible connection to the songs and the audience too, which always helps of course.

1. What is your favourite song to perform live and why?
My favourite song to perform live at the moment is called 'Leather Coat'. This is because I feel like it can relate to a time in the audience's life. With this song I like to single people out, I guess you could say I kind of sing the song about them and to them. It can create a different type of connection with that particular audience member, I feel like it makes the performance more personal. It also has different dynamics which allows me to show off a bit, which is fun too.

2. If you could duet with anyone, dead or live, who would it be?
If I was to duet with an artist it would definitely be between Matty Healy and Ed Sheeran. I wouldn't know how to choose between them as they're both so talented and both so different.

3. Where do you gather inspiration for songwriting and what is your usual writing process?
My writing process is probably a bit of a strange one... It always differs. Sometimes I can just pick up the guitar and the song appears out of nowhere. Other times I'll be thinking of a melody in my head and then try and figure out the music to go with it. Lyrically, I relate a lot to my own life, as I think that's what makes a song real.

Chart: Ship To Wreck - Florence and the Machine

Maybe this is cheating, but this track was released nearly a week ago and if it doesn't gradually climb the charts, I really will be surprised. This is the third single from their third studio album 'How Big, How Blue, How Beautiful', which is set to be released on 29th May (2015). The overall sound and lyrics of this album are just as good as the previous two, so hopefully they'll do just as well in the charts too.

Ship To Wreck - Florence and the Machine (link)

Barney, Ben and Blythe make up electropop trio, Vaults, their song 'One More Night' was featured on the Fifty Shades of Grey soundtrack and they have recently supported Everything Everything on their Spring tour. This is a live performance of their track 'Cry No More' for Vevo Dscvr.

Swedish indie/dream pop, singer-songwriter Lykke Li recently covered Drake's 'Hold On We're Going Home'. The original was a hit when released in August 2013, being in the Top 10 in multiple countries charts and Lykke Li offers a dreamy, haunting and ethereal approach to the song in this video. Stunning.

Rusty is currently living in Nashville, TN, Dodie is currently living in London, UK and travelling the world with friends as well as music. They both got together in a corridor to film this stunning version of Rusty's original 'Novels'. (Please go check them both out on YouTube etc. 'cos they're both bloody brilliant!)