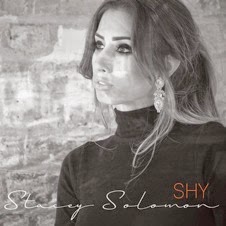 Six years after she burst onto the scene via X Factor in 2009, Stacey Solomon is now set to release her long awaited debut album 'Shy'. Since coming third on X Factor, Stacey has spent her time bringing up her young children, winning I'm A Celebrity in 2010 and recently competing in The Jump. Still only 25, Stacey has already seen success in TV and music, with her debut album being release this year, 2015 also sees her release a fragrance and publish her first novel.

1. How old were you when you started getting involved in music and how?
I have always loved music and singing. It is just part of me.

2. What is the most inspiring gig/concert/festival you've been to?
Oh wow! That would be impossible to say. I have been lucky with everything I have seen.

3. What have you been listening to lately?
My kids and I have been singing 'Uptown Funk' lots.

1. Lyrically and musically, the tracks on your album are mature, soulful and honest, where do you gain inspiration and influences from?
From my every day life. Everything influences you when you are writing a song. I was so nervous when I first went into the recording studio, but when I started to write, it just came out naturally. On an upbeat day, I would write an inspirational and uplifting song. On a day when I was a bit low, it would get reflective and very personal. It was like the best therapy session ever.

2. What is your favourite track from your forthcoming album and why?
I absolutely love 'I Hope You're Happy'. I remember writing that song so clearly with Mike City. It was such a personal song for me and it says everything I wanted to say. I am so happy with it and so excited for people to hear it.

3. What process did you go through creating 'Shy', musically and visually?
I waited for a record label to offer me a deal where I could what I wanted to creatively. I knew I had things I wanted to say that I couldn't on just a covers album. I was lucky that I was offered a deal that allowed me to take my time and learn to write and record in my own way. I just had to think about how I was feeling and what I most wanted to share. Then the songs just came naturally. When I was offered songs by other writers, I just had to see whether they fitted with that I wanted to say. I also knew I wasted to include the covers of 'Gravity' and 'I Walk The Line' as they are two songs that mean so much to me.

What has been your favourite experience since X Factor and why?
I have loved every experience. I could not choose. I have been so lucky with everything.

Stacey's debut album has definitely been worth the wait. The album opens with title track and first single 'Shy', co-written with Rita Ora and released earlier this week, it's soulful and welcomes the listener into the album well. 'Breath Away' follows with vocals and melody reminiscent of Amy Winehouse. Stepping down in tempo 'Gravity' and 'Only You Will Do' offer a slow, steady and soulful feel, with stunning vocals and lyrics to go alongside.
Back to upbeat, uplifting and catchy melodies and vocals with 'The Way We Was' and 'I Hope You're Happy'. The latter track especially has one of those powerful 'I can do anything now' tones to it, a good way to start your week for sure. Slowing down again to steady and sincere songs, 'Perfect You' and 'Dream In Blue'. Personally, I feel 'Perfect You' is a stronger song with more emotion running through it, however, both songs offer honest lyrics highlighted by the tone of both songs. Next is 'My Big Mistake', which you can tell has influences of Lily Allen's co-writing with a hint of Caribbean influencing the underlying melody. The penultimate track 'Too Late To Love Me Now' is again slow, the storytelling lyrics create an emotive layer for the song. Finishing on an upbeat cover of Johnny Cash's 'I Walk The Line', this is a perfect summer sing-along tune with layered harmonies, highlighting Stacey's bubbly personality and approach to life.

From beginning to end, it's a showcase of Stacey's talent and sound which she has waited to form herself, with influences and inspirations not only from the past six years, but also before. With a theme of love running throughout the album, there is a mixture of genres pulled together, well; and with sincere lyrics and emotive and powerful vocals, this album is one to be listened to again and again. Make sure you pre-order the album, released on Monday (20th April 2015), it's one you won't want to miss.