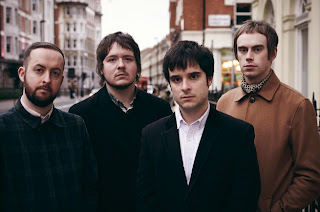 Gaz Roberts, Joe Forshaw, Joey Bennett and Chris Gallagher make up Man & The Echo, a band from the North West of England. They signed to A&R man Jamed Endacott's rejuvenated 1965 label in November 2014 and have been in recording sessions with Jan 'Stan' Kybert, a long time Paul Weller collaborator. Having recently released their debut single 'Honeysucker' via digital release and limited edition vinyl, the band also have a string of upcoming live shows, including an appearance at the Isle of Wight Festival.

1. How old were you when you started getting involved in music and how?
Gaz: I've been playing instruments since I was really young. My Dad is a guitarist and my Granddad was a good singer so I grew up in quite a musical environment. I started doing little gigs and making demos when I was a teenager, I can't really remember a time when I wasn't making music.

Fush: I got my first guitar when I was 16, I had injured my ankle playing football and needed something to pass the time. As soon as I picked it up it felt natural, I asked my mate to teach me a couple of basic chords and I basically haven't stopped playing since.

2. What is the most inspiring gig/concert/festival you've been to?
Fush: Me and Gaz saw Neil Hannon (The Divine Comedy) at Manchester Academy a few years back. It was inspiring to see how just one man on a stage with a piano and guitar could captivate an audience from start to finish.

Gaz: Probably one of the first Morrissey gigs I went to. It wasn't so much the performance as the effect he had on his audience. People are just drawn to him, just thrilled to be in his presence. I think it's probably to do with how authentic he is and how rich and identifiable his range of influence is. In The Smiths and his solo work you can hear the glam of the New York Dolls and T-Rex alongside the water lapping up against the side of the ferry in A Taste of Honey.

Joe: I don't know what the most influential gig I have been to is, but I was very impressed when I saw Paul Weller. I was amazed by the amount of energy and passion he and the band had on stage. When I was younger I managed to watch Babyshambles at the Ritz in Manchester which had an influence on my music upbringing.

3. Who have you been listening to lately?
Gaz: I've been listening to a lot of Jazz lately, Fela Kuti and stuff. We're writing a lot for our album at the moment and I try not to listen to stuff that is similar to us when I'm writing so I don't end up just nicking stuff.

Fush: I've just bought a Brazilian compilation from Soul Jazz called 'Topicalia' that's pretty much been playing non-stop at home. I'm also listening to Talking Heads, The Beta Band and Orange Juice. A couple of new bands I like are Blossoms and H.Hawkline.

Joe: Lately, I have been listening to the Black Keys especially the 'Brothers' album. I really liked the production on it, it was recorded using analogue equipment and recorded using old techniques. Also a lot of Frank Sinatra.

3 Questions for Man & The Echo:

1. As you’re releasing your debut single on limited edition 7” vinyl (as well as a digital release), what are your thoughts on the big vinyl comeback?

Fush: It’s great to see people are buying vinyl again. Don’t get me wrong I love the convenience of an iPod, but there really is no substitute for owning the physical product. Not only is the sound much better but I find that when you play a vinyl you actually give it your full attention, which you tend not to do if you are jogging or whatever. Record Store Day has become a major event which is great, and the emergence of the vinyl chart is a good thing. We need less café’s and more record shops!

Joe: I love Vinyl so for us to release on Vinyl is great.    You can't beat putting on a vinyl and hearing that warm tone, the crackles you get.  I love how Vinyl is making a comeback, with MP3 you just download it on your phone or laptop and maybe listen to it whilst on the go or having a shower, where as Vinyl you have to sit down and really take in the music, appreciate what has gone into making the music, taking in the production and effort that has been put in.

Gaz: I don’t really know, I’ve been hearing about a vinyl comeback for about ten years. I think a certain type of music lover (and I would include myself in that) is bound to prefer vinyl to a digital format because it sounds better and you have a proper sense of ownership of your records. Plus there’s the aesthetic aspect, slipping the record out of the sleeve, dropping the needle on it, looking at the artwork and reading the notes: all that is as much a part of listening to an album as the noise it makes. I’m not some vinyl head snob though, I download music as well. But I think in terms of a revival, vinyl is never going to be the number one format of choice for most people, but it will always be there for the dedicated listener.

2. Was there something specific that prompted you to write ‘Honeysucker’, if so, what was it and if not, what in general inspired it?
Gaz: Well Fush (bass player) prompted me to write the words when he came up with such a brilliant bass riff. I was thinking about how a lot of pop music has a kind of “nothing’s gonna bring me down when the sun’s shining and I can afford a sandwich” kind of message. Which I find incredibly annoying because the terrible things that are happening all over the world frequently upset me, as they should everyone. The song’s sort of saying “I’m not gonna walk around smiling my head off when we live under a corrupt government full of private schoolboys who are persecuting the most vulnerable people in society whilst letting massive corporations get off without paying their taxes.”

3. What process did you go through creating the music video for 'Honeysucker', how did you choose who to include?
Gaz: I think our manager suggested a lyric video and we didn’t want it to look naff, so we just did a bit of research, found a load of footage and then sent it to someone who knows how to edit stuff together. We were really pleased with the outcome.

If you could invite any three people to one of your gigs, who would it be and why?
Joe: Ringo Starr- He’s a big influence on my playing and how I listen to drums, plus he was in the Beatles!
Phil Spector- My all time favourite producer, would love to meet him although he might be mental, it would be very interesting evening.
And lastly it would be Benny Benjamin, who was the drummer for the funk brothers, who were the Motown house band.  He had an amazing Groove and Rhythm which created that whole Motown sound and Feel.

Gaz: I don’t really know. I don’t want to invite three people who don’t know each other ‘cos I’d be flitting between them all night making sure they’re all having a good time. So three people who come as a three would be ideal. I’d invite Supergrass, they seem nice.

This being their debut single makes the future bright for these guys. It's a stand out song musically and lyrically, a brilliant concept created and continued. A perfect toe-tapping track, and shout-along song, this one would fit into their live set brilliantly, ah imagine the atmosphere! It's definitely worth a listen (and a few replays!) I love it!