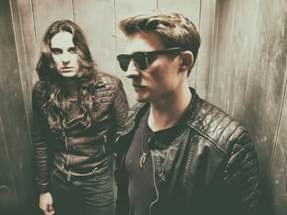 Panic Island are a North London songwriting duo, Arron Sans and Vinnie Shimia, met in Spain in 2012, during a show by The Cult and both set out to create a new rock band. Some might consider them a rock version of 'Hurts' but others hear it as a fresh take on alt. rock, bridging the gap between The Killers and QOTSA. Panic Island are now set to release their debut EP 'Cabin Fever' on 18th May (2015).

1. How old were you when you started getting involved in music and how?
A: I have been involved in music for about 10 years now. It wasn't something I had a lot of confidence in doing before although I always dreamed of it since I was a little kid.

V: I have been playing the guitar since I was 13, like Arron, I wanted to play since as far back as I can remember.

2. What is the most inspiring gig/concert/festival you've been to?
A: For us as a band, it would have to be The Cult gig where we met, they played La Riviera in Madrid, I remember screaming along to Fire Woman and this guy with wicked hair just sings along with me, it was one of those 'bro' moments! Haha

V: Most inspiring gig has been Aerosmith in 2006. It gave me that real, in your face, feeling of how huge a band can be, and that undeniable feeling that Steven Tyler is as much in his element as a frontman can be.
First time I went to Download Festival was also quite inspiring. It was quite surreal seeing that mass of people gathered there to listen to good rock music. It felt like a union of good-hearted rockers enjoying some of the best music of previous and current generations.

A: I remember going to see a band at a pokey little venue in Bournemouth once. It was just when I joined my first ever band. They were called My Red Cell, it was a really cracking gig! The crowd was intense. The front man was a bit crazy, had that look in his eye. They were like a punk ACDC meets White Stripes. They gave me a signed copy of the album after the show!

3. Who have you been listening to lately?
V: Royal Blood obviously caught my attention. I'm quite addicted to insane guitarist Guthrie Govan. Tame Impala as well. And I've been listening quite a bit of Wolf Alice, oddly enough.

A: I heard an amazing song by an artist called Scarlet Billham, she opened a gig with this track called 'Escape Route', I haven't heard a great pop song like that for a long time. Other than that I've been swatting up on Iggy Pop and Royal Blood too, looking forward to seeing them play Wembley Stadium this summer.

1. Why/how did your name 'Panic Island' come about?
V: We wanted something that would reflect who we are. It represents this place within us and the energy we have.

A: Yeah, it's like the driving force of who we are. It shows the intensity of where our creativity comes from.

2. If you could only listen to three album for the rest of the year, what would they be?
A: Ouch! Why do people choose these questions? It's the most painful thing to answer...

V: Cheers! How about we ask you to pick which arm you have to have cut off? Haha!

3. What song from your EP 'Cabin Fever' did you most enjoy creating and why?
V: I think 'We Start Fires' holds a special place in my heart. It was the first song myself and Arron wrote together and I clearly remember our main goal with it was to make the most banging chorus we could possibly make. Do you think we managed to achieve that? (MIT: definitely achieved!)

A: It's a hard one for me this, we had a great time recording at Tipler's studio, so all the recordings were special, but writing them... I think 'Temples' was one that just made me think, 'this has everything' you know? As a song, drama, melody, honks, passion, pain...

Where in the world would you most like to visit and why?
A: Well, Vinnie being a Brazilian and having never gone there myself, I'd have to say Brazil. But I would really like to go to Iceland and see the northern lights. And visit I would love to visit Japan for the cultural differences and the sushi!

V: Arron always says he's a northerner, was born in York. He says it's nice there, so I'm intrigued, but he can talk a lot of shit, so I don't know... Is it nice there? Haha! To be honest though, there isn't one place. As with music, different places would bring different feelings and perspectives. A road trip through America is definitely in the plans though.

'Cabin Fever' EP Review:
The EP opens with 'We Start Fires', with a steady beat, growing guitars and vocals layering up the intro blends nicely into the rest of the song. If you saw this song live you'd be clapping along, then dancing hard and singing along to the chorus. 'Temples' comes next, the songs blend nicely into each other, allowing a 'Panic Island' sound to be created. Again, it's got a catchy melody and everything about it shouts 'brilliant live music' with this specific track especially. Finishing the EP off with 'City Screams', yet another brilliant track. Overall this EP has everything a great rock EP needs, gritty guitars, strong beats and shout able lyrics sung with great vocals.

Chart: Hallelujah - Panic! at the Disco
'Hallelujah' is the latest single from American pop rock band, Panic! at the Disco. It was released on 19th April (2015) through Fueled By Ramen and comes from their forthcoming fifth studio album. The track became the band's second Top 40 single and the first since 2006 when 'I Write Sins, Not Tragedies' hit the charts and became a tune! (Yeah, how was that nearly 10 years ago already?)

Live Performance: Vultures - The Ramona Flowers
Here is a live version of 'Vultures' by English 'indie' rock band, The Ramona Flowers. The band who met a university have grown over the past few years, releasing their album 'Dismantle and Rebuild' last year, as well as supporting Bastille, Bombay Bicycle Club and Alt-J on tour. Anyway, have a listen to their second single 'Vultures' and enjoy!

Cover: Believe - Nothing But Thieves
English band, Nothing But Thieves, cover Mumford and Sons' 'Believe'. Nothing But Thieves comprise of Conor, Joe, Dom, Price and Phil, from Southend comes a brilliant band building their way to the top. Their talent is highlighted in this cover for Radio 1 Live Lounge of 'Believe' the first single from Mumford's recently released third studio album 'Wilder Minds'.


Believe - Nothing But Thieves (link)

Classic: The Thrill Is Gone - B.B. King
'The King of Blues', B.B. King passed away in his sleep aged 89. There is no question that he inspired many musicians, especially guitarists from all genres of music, across the world. King was once ranked the third greatest guitarist of all time and was also inducted into both the Blues Foundation Hall of Fame and the Rock and Roll Hall of Fame. Fusing jazz and blues on his beloved guitar, 'Lucille', the thrill may be gone but his memory and music will continue to shine.