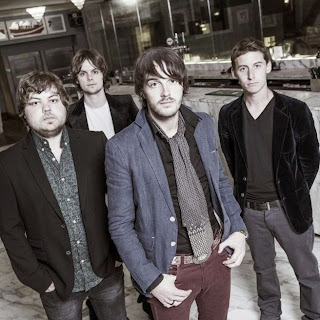 Having met on a modeling shoot in Dublin 2011, Josh Dunford, Owie Lumsden, Cuddy and Rourke Bradley joined powers and Sal Vitro was born. Touring extensively has honed the band into seasoned performers; they’ve joined Thin Lizzy on their farewell tour at a sold out Olympia Theatre, opened for Jeff Beck ad Richie Sambora and rocked out to audiences 10,000 strong for Stauts Quo. Now they’re ready to release their first single ‘Wear It Out’ on 25th May.

1. How old were you when you started getting involved in music and how?
Josh: My Dad was a blues musician and I’m pretty sure he was blaring people like Junior Wells and Muddy Waters at me while I was still in the womb, doing his best to indoctrinate me. It worked!
There’s always been music in our house so I can’t remember exactly when I started, but I do know that at the age of 7 or 8 I had a life size poster of Michael Jackson in my bedroom and used to sing the ‘Bad’ album in it’s entirety… a bit creepy in retrospect.

2. What is the most inspiring gig/concert/festival you’ve been to?
Owie: There’s a small independent festival in Ireland called KnockanStockan which in the last 6 years has expanded from just a few friends playing music together in a small pub in Dublin to a three day musical festival. It caters to over 100 acts and provides a great platform for unsigned bands to perform in front of a really enthusiastic and receptive audience.

3. Who have you been listening to lately?
Rourke: Hozier, probably the most creative current album I’ve heard in a long time. Also The Brothers Johnson, they’ve a cool 70s r’n’b funk sound that has influenced a lot of funk and hip hop bands.

1. Who influences your music and what inspires your lyrics?
Josh: Like any band our influences are constantly changing and expanding. When we first started out bands like Led Zeppelin, The Who and The Stone Roses would have been massive influences. At the moments, acts like The Meters, Vulfpeck, Hozier and The New Mastersounds are really inspiring me personally. Lyrically, I guess a lot of the songs are about things in life that I feel should be different or things that put my nose out of joint. I draw a lot on the styles of people like Dr. Johnand Randy Newman who can write about really dark, morbid topics but present them in a lighthearted and even funny way.

2. One unforgettable moment whilst performing live?
Owie: Walking out onto the stage of the O2 Arena, Dublin to support Status Quo to an audience of 10,000, when a bloke in the front shouted “WHO THE F*CK ARE YOU???” just as we picked up our guitars! That was both nerve-racking and amusing at the same time.

3. When creating your single ‘Wear It Out’, was it a collective effort as a band or did you have specific roles?
Cuddy: ‘Wear It Out’ as you hear it now is a bit of a reincarnation of an older tune Josh and Owie had written before myself and Rourke came along (God bless that water cooler at the modeling agency’s office!) At that stage they already had the riff, vocals and melody down. When I first heard the original demo I could hear some funky drums working well with it. Rourke must have gotten the funk vibe as well with the bass line he came up with. At the time I was listening to a lot of hip hop, particularly for the sampled drum beats and there’s a little nod to NWA’s ‘Straight Outta Compton’ in a place or two with the drums laid down on the track. It’s quite subtle so you’ll have to squint your ears to hear it… but it’s in there. After that it just took a bit of Martin Quinn’s magic at Jam Studios to reincarnate it into it’s current form.

Three likes and three dislikes?
Josh: I like the sound of freshly cut grass ;) and strongly dislike the other members of Sal Vitro.
Rourke: I dislike the fact that at 25 years of age, Cuddy’s not housebroken yet.
Cuddy: I just like holding hands with a girl!
Owie: I hate Rourke’s snoring and love the £4 ‘Co-op Chaos’ wine!

'Wear It Out' Single Review:
If you needed a catchy and funky tune for summer, this is it! With a fantastic riff that has been stuck in my head since I first heard the song, brilliant bass line and drum beats filling in the gaps between the great vocals and melodies. Listen to it once and end up having to listen to it a few more times... Enjoy!

Wear It Out - Sal Vitro (link)

Live Performance: Don't Wanna Fight - Alabama Shakes
'Don't Wanna Fight' was written and performed here by American 'rock' band Alabama Shakes. The song was released as the lead single from their second studio album 'Sound & Colour'. It gives a taste of the different genres the band dip into on their latest album and it's a generally brilliant soulful song.

Cover: Wildest Moments - Ben Howard
As a nod to Fearne Cotton leaving Radio 1 today, I felt it would be wrong not to use a live lounge cover and who better to finish off Fearne's stint as Live Lounge presenter than Ben Howard; a king of covering songs and making them his own. 'Wildest Moments', originally by  British artist Jessie Ware for her debut studio album 'Devotion' released back in 2012. Even though it didn't reach Top 10 in the singles chart, it received positive responses and critical acclaim. Enjoy!!

Soundcloud: No Ringer - Grounders
'Creating a collection of dense and intricate pop music under the gauzy veil of psychedelia and lo-fi pop'; Grounder (Andrew Davis, Daniel Buskeikin, Mike Searle and Evan Lewis) are set to release their first full-length album this summer and this is the first single 'No Ringer'. These guys are a band to watch (and listen to a lot...)