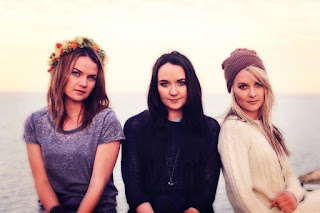 Germein Sisters are a young, indie-pop band from Australia and comprising of sibling Georgia (lead vocals, guitar, piano), Ella (electric cello, bass, backing vocals) and Clara Germein (drums, guitar, backing vocals). They formed in 2012 after spending their childhood jamming and have gained nominations and awards ever since. They've also opened for Sting and Paul Simon in Adelaide and are headed to Isle of Wight Festival and Women of the World Festival in Germany this year, they've toured all over the world, the future looks bright for the Germein Sisters and with their forthcoming release 'Because You Breathe EP' on 15th June (2015), the rest of this year will be big and busy for them!

1. How old were you when you started getting involved in music and how?
We grew up in a very musical household, our Dad played the trumpet and our Mum the piano and guitar, so we were always encouraged to play and be creative with music. From as early as we can remember, we would put on concerts for our grandparents and friends at nearly every family gathering!

2. What is the most inspiring gig/concert/festival you've been to?
Our first big concert we went to was when U2 played in Adelaide on their Vertigo tour. The concert was amazing and we were lucky enough to get to meet Bono briefly before he went on stage! It was so exciting! We love U2 and their values! The stage show was awesome too! It definitely made us dream of playing a big show like that.

3. Who have you been listening to lately?
We all listen to such a variety of music and our favourites change everyday!! Lately, we have been listening to Coldplay, James Bay, John Mayer, Lana Del Rey and HAIM!

1. Who would be your dream artist/band to tour with and why?
Probably Coldplay! We all love their music and stage production! It'd be so awesome to tour with them!!

2. Where in the world do you think 'Because You Breathe' will be more popular, America, Asia or Europe and why do you think that is?
Wherever!! We hope that our music would be appreciated all over the world! We try to write songs that appeal to everyone in their own way!

3. What is your favourite song on your forthcoming EP 'Because You Breathe' and what process did you go through creating it?
Of course we love all our songs, but a favourite would have to be our song 'Golden'. It's about doing your best and standing up for what you believe in. We recorded our EP in Ireland with the producer of the Corrs, which was super exciting and an awesome process to experience! We wanted this song to be inspiring with a slight rock element... Playing it live is so much fun, we really get to let loose on it!

If you were stranded on a desert island, which three items would you keep with you?
Matches, towels and a guitar.

'Because You Breathe' EP Review:
This EP could easily become the soundtrack to my summer. It's brilliant; upbeat and catchy, with stunning harmonies and lyrics with a strong message. Layered piano, guitar, drums, bass and vocals all work together to make a unique sound for the Germein Sisters that allows them to stand away from groups like HAIM, First Aid Kit or the Corrs, but you can still little elements that could remind you of them. Positive messages bleed through the first two songs 'Golden' and 'Da Da Doo' - which reminds me slightly of Nina Nesbitt. There are rockier elements within the songs too, but indie pop would define their sound well, great pop songs that get stuck in your head and would fit summer road trips or BBQs with that indie rock twist.