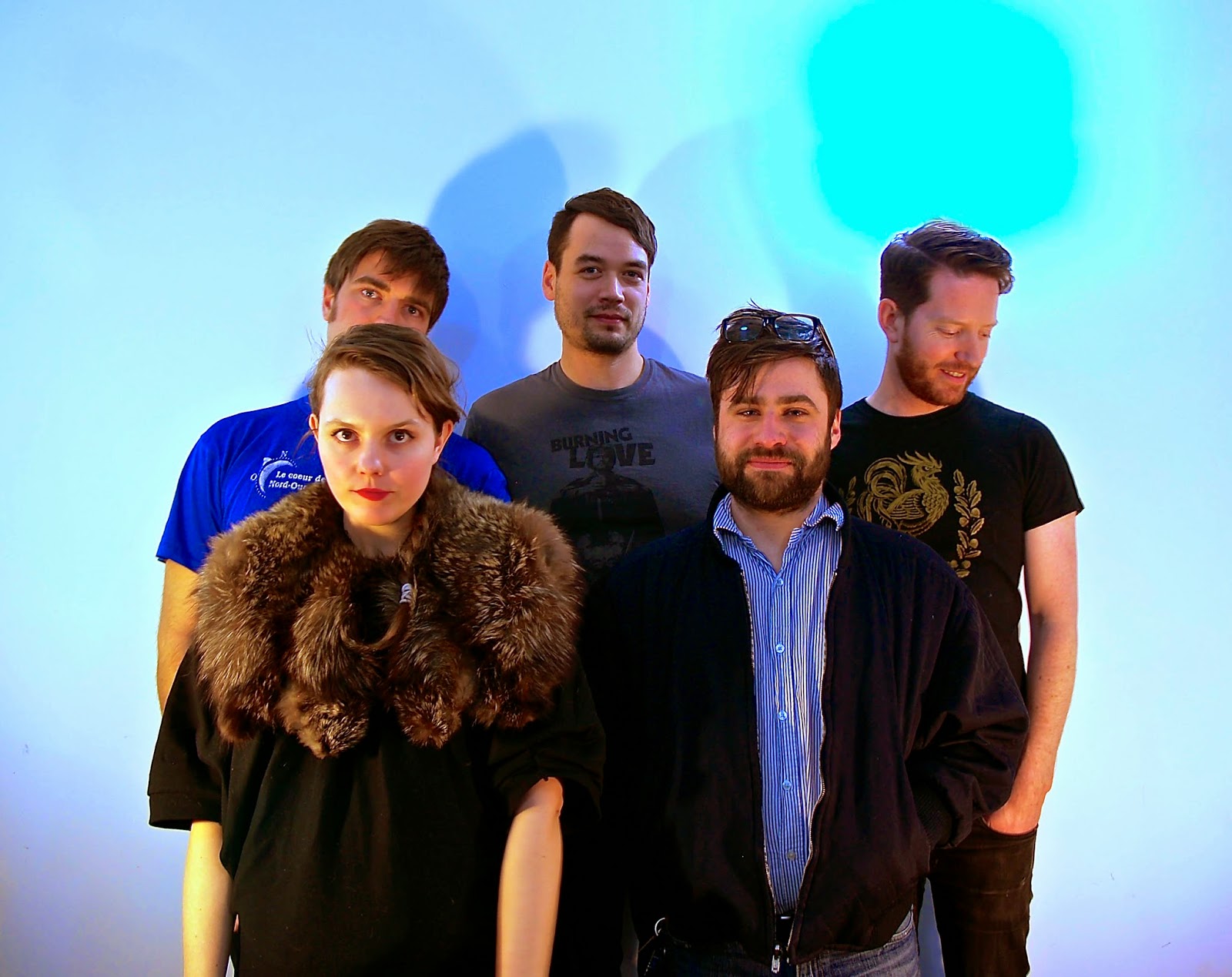 Tyson McShane, Jeanette Stewart, Chris Morin, Levi Soulodre and Aaron Scholz make Slow Down Molasses, a Canadian indie rock band. After drawing inspiration from a series of photos taken by Tyson's father during the Parisian anti-capitalist protest of May 1968, their latest album 'Burnt Black Cars' was created. Following their previously unveiled single 'Summer Sun', Slow Down Molasses continued their previews of their album with 'Home' and released the LP 'Burnt Black Cars' on 21st April (2015).

1. How old were you when you started getting involved in music and how?
I got involved in music fairly late. I think I was 17 when I first started playing guitar. I grew up in a small city in northern Saskatchewan and there wasn't a music scene. Occasionally, there'd be a local band or two around, and at most once a year someone would throw a hall show with some punk bands from Saskatoon, so the whole idea of playing in a band seemed like a foreign, far-off, big-city kind of thing. It didn't help that no one I knew was into the kind of music I liked. It seems bizarre to say this but when I first started getting into music was a year, maybe two, after the internet became available in my city (it was a pretty isolated place) - before then, your options for discovering stuff like Swervedriver or My Bloody Valentine were pretty limited. Fortunately, there were a few wonderful Canadian bands I read about, like Sianspheric and Southpacific (both terribly obscure Canadian space-rock bands) who would rave about all the stuff happening in the UK. I'd buy records based purely on reading about them in an interview. Once I moved to Saskatoon for university, things were much less bleak. There was a great local music scene that I fell in with and eventually stumbled into playing in a few bands.

2. What is the most inspiring gig/concert/festival you've been to?
End of the Road in 2011 was pretty incredible. We were invited having never toured outside of Canada, so it was pretty huge for us to go to the UK, let alone play a festival that seems to book all my favourite bands. It was really great. We did a short UK tour, then spent three days at EOTR and had an amazing time, saw some incredible bands, hung out with lots of Canadian and UK friends and played three wonderfully inspiring shows. That festival really is a special one. I hope we are able to make it back at some point.

3. Who have you been listening to lately?
I've been loving the new Torres record. Same with the new Swervedriver. For lots of this year I've had the Viet Cong album on high rotation. I also just started listening to The Horrors. In a bunch of reviews of our new songs, people have been referencing The Horrors and I've never actually listened to them before. It's good stuff. I suspect we like a lot of the same bands!

3 Questions for Slow Down Molasses:

1. How did your name 'Slow Down Molasses' come about?
I'd just scribbled those words close together in a notebook while on tour with an old band, and when I first started writing songs for what became this band, it seemed appropriate as a name. At the time, I was going through a huge Mojave 3 phase and was trying to write slow, hazy acoustic songs, Inevitably things got louder and louder, turning into what it is now.

2. Having drawn inspiration from the series of photos that Tyson's father took - during the Parisian anti-capitalist protests of May '68 - why and how were they inspiring to you during the creative process of your album?
I vaguely remember the photos from when I was young and when I started working on this album, I was writing lyrics that touched on more political themes than I'd previously written about, and so I kept thinking about those photos and my Dad's stories from that time, and it seemed relevant to a lot of what is happening now. Like then, there is a clear divide in society, with competing ideologies and more and more people actively speaking up and protesting against some of the actions our governments take. It's been really interesting looking at what is happening now and looking back at Paris in 1968 and thinking about how our cities slowly evolve, and how it seems like on a regular basis there almost need to be popular citizens' movements to arise and push back against the direction a government is going, to keep things in check. A lot of these songs are attempts at describing or understanding how, despite the conflicts that may be happening in a society, it still keeps functioning in some way. Things may be damaged and may change, but people still get up in the morning and do what they do.
I actually had the great fortune to be able to spend some time in Paris last fall with my Dad and it really struck me how bizarre it was to walk down some of the streets those photos were taken on. If you didn't know the history, you wouldn't know that at one point riot police were firing tear gas at students and artists were lighting cop cars on fire. They were just normal, functioning streets in a huge city. It just struck me how moments like May '68 are hugely important, but at the same time ephemeral - decades later, they can end up a lesser-known footnote about how a city or country came to be what it is today.

3. Was your forthcoming album 'Burnt Black Cars' a collective effort or did you have specific roles during the writing process?
It was a lot more of a collective effort than any previous album. Previously I wrote most of the songs and tended to guide things in the studio. This time we had the good fortune to receive a grant from the Arts Board of Saskatchewan that afforded us more time to write as a group, and it meant the others in the band were much more involved in the writing and arranging. I still took the lead and set the tone for the record, but Jeanette (our keyboard player) wrote one song and Chris (our bass player) wrote another and we worked on them as a band a lot more than we ever previously did. We toured the last album a fair bit and through those tours, our lineup solidified, making it much easier to create this album in a more collaborative way.

What do you enjoy doing in your spare time?
That's always a funny question to me. For the most part, everyone in the band is pretty obsessively involved in music, so collectively I think I can safely say we tend to use nearly all of our spare time on musical endeavours. Chris and Jeanette both write about music and also have their own bands that sometimes feature other members of Slow Down. Aaron (our drummer) plays in what seems like 13 other bands. Levi (our guitarist) has his own project called the Pxrtals and does a lot of work with Factor, a Saskatoon-based hip-hop producer. So I don't know if any of us have much spare time these days!

'Burnt Black Cars' Album Review:
The album opens with an ethereal and atmospheric instrumental track 'Sovereign'. 'Burnt Black Cars' follows with a haunting introduction that builds with each instrument layering up to sound brilliant, with limited vocals and the second half being instrumental it forces you to focus on the intricacy of the arrangement. 'Summer Sun' is a great track, but I did find it a little repetitive. The rockier track 'Stay Still' comes next and is then followed by haunting dream pop style two minutes of music in the form of 'Resurrection Blues', one of my favourite songs on the LP. 'City Sublet' opens with delicate percussion growing with layered brilliance, a gritty mid section but still chilled enough to sit outside listening to whilst having a BBQ in the summer with a few friends. After comes 'Don't Forget The Youth' is catchy and I feel it would fit well in a coming of age film soundtrack, like Submarine or something. 'Home' is one of my favourites on the album, it reminds me of Bombay Bicycle Club but rockier, and the narrative told in the music video adds to the visuals and work so well together with the song itself. The album closes with five minutes of instrumental bliss 'Underneath the Cobblestones', it's dreamy and allows visual imagery to be created.
Overall, the album is brilliant, I'd say it's Sigur Ros meets The Killers or Death Cab For Cutie and is strong gritty rock mixed with dreamy pop to create an atmospheric sound that I can't get enough of.