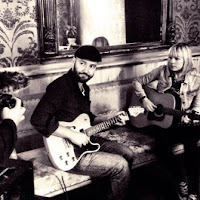 Growing up in a musical family, Bristol-based singer/songwriter Tom Mitchell started playing piano and guitar at a young age and wrote his first song aged 15. Tom worked with and accompanied Duffy on some memorable gigs across 2006/07. He then spent a few years performing across the country with the likes of the Cadbury Sisters, Juey and John Madden. 2013 then saw Tom go it alone musically and release his debut solo album 'New World'. Since then, his song 'Michael's Garden' was used by Pandora Jewellery to advertise one of the ranges in 2014, swiftly followed by the release of his 'Things That I Need To Undo EP'. His recent high profile support slots include Mark Morriss (The Bluetones), Mikky Ekko, Winter Mountain and John Murry, making Tom one to watch.

1. How old were you when you started getting involved in music and how?
I started playing the piano at about eight and learned a lot about music theory, which really helped when I then picked up a guitar at the age of 11 and really began my music life proper!

2. What is the most inspiring gig/concert/festival you've been to?
Mark Knopfler live in Birmingham in 2010 comes to mind. Amazing to see my absolute guitar idol still on amazing form going into his 60s in a reasonably intimate environment.

3. Who have you been listening to lately?
Belle & Sebastian, The War On Drugs and Johnny Flynn have all been mainstays in my collection of late.

1. Where do you gather songwriting inspiration from?
Memories, dreams, the news, my friends, my enemies (!) - anything is fair game when it comes to inspiration.

2. Who would you most like to write/collaborate with and why?
Elliott Smith, may he rest in peace. A truly exceptional songwriter... I'd love to see how his mind worked when it came to putting his thoughts into song.

3. Your song 'Michael's Garden' was used by Pandora Jewellery in one of their adverts last year, what process did you go through writing it and did it differ from the songs on your album 'Stones'?
'Michael's Garden' is very different to most of my songs in that it doesn't really tell a story of make a point. It has three verses - one is about a dream, one is about a memory and one is about what was going on around me in the room while I was writing the songs. I'll leave you to guess which is which! I came up with the ride before the words but they just kind of flowed once I got started.

Most played song on your iPod and why?
Absolute Beginners by David Bowie.
The perfect quality pop song.

'Stones' Review:
'Stones' is a brilliant collection of songs, folk with aspects of rock, pop and even country at times mixed in. 'Shadows In The Water' is upbeat, old school folk, with 'Fifty Trees' building into another great track, brilliant for singing along to. 'Lockdown In 5' focuses in on Tom's stunning guitar playing and dreamy vocals, allowing you to shut out surroundings and really listen to his music. 'Aim' is slightly steadier and I found the count a little irritating at times, as it ran all the way through and distracted me from the guitar and vocals, however, the lyrics are incredibly honest and the guitar is beautiful. 'Stones' is a great song, rocky and melodically good, reminiscent of those 60s/70s pop folk songs that would get people singing around a campfire or at a festival. Closing with 'St. James' Gate' picks it up and finishes on an upbeat track. Overall a great, chilled LP that although is great as background music can be listened to from start to end with no distractions, solely listening to the intricacy of each track.