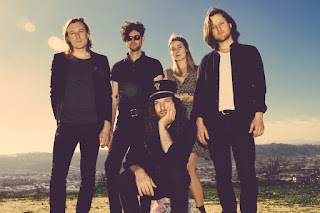 Having recently revealed the first taste of their forthcoming LP with new track 'Saturday Night', Graham Jones, Jeffrey Innes, Brandon Scott and James Younger also recently went on tour with Lieutenant (Nate Mendel, bassist for Foo Fighters and Sunny Day Real Estate). They worked with engineer and co-producer Colin Stewart at The Hive throughout 2014 and mixer Tony Hoffman (M83, Foster The People, Depeche Mode) to expand their reputation for seamlessly crafted pop songs. Their album will be released on 15th June (2015) and they have a summer full of live dates, so if you get a chance, try catch them at a venue near - or not so near - to you! (live dates can be found at their website, link down in the links section!)

1. How old were you when you started getting involved in music and how?
Brandon played 'Come As You Are' on guitar for his first piano recital, he was meant to play hot cross buns, never happened.

2. What is the most inspiring gig/concert/festival you've been to?
Jeff went to Coachella in 2005 and called Graham from Southern California, and in a moment of divine inspiration he flew down burnt some Palo Santo and decided to start this band on their return to Canada. Meanwhile, James saw The Strokes 2000 back in Manchester at The Hop and Grape and his life has been fucked ever since.

3. Who have you been listening to lately?
David Bowie, the entire discog all over again, from Glam to Smack. Pink Flloyd 'Wish You Were Here', Bryan Ferry 'Boys and Girls' and Lindsey Buckingham 'Go Insane'.

1. You've recently had a chain of live shows at SXSW and touring with Lieutenant, but do you prefer playing smaller or larger venues and why?
Larger venues honestly, the electricity and energy is never taken for granted by us, it is a reminder of the power of the human collective, and implicitly reinforces the decision to play music in the first place, to connect with others. Big venue shows can get really tribal, which is a timeless activity. The occasional barn burner always feels good too. I guess it's a question of perspective.

2. Who are your role models in the world of music and why?
Rick Rubin, because we just listened to a monster podcast with him talking holistically about creativity, mental and physical health, radical self care, and all importantly with massive anti business vibes. It reinforced how we feel about the world of music.

3. What process did you go through creating 'Saturday Night' and does it differ from other tracks on your forthcoming LP?
'Saturday Night' started with a drum sample and a bass line that Jeff wrote. The rest of us kind of bullied him into accepting how incredible it was. From there Jeff wrote the rest of the song, in the studio it was collaborative as ever. It is in keeping with the rest of our LP, but I guess you'll have to wait and see.

1. If you could go to the moon, what song would you play first in space and why?
Jeff: 'Nothing Compares To You' by Sinead O'Connor, because if you are going to the moon, you would really want to bask in the loneliness you would inevitably experience. On a slightly different vibe, have you ever considered with that famous photo of the earth from the moon, that the astronaut who took the photo, is the only person in the universe not in the photo??? How does that grab you?!


You can listen to the album 'On Blonde' here: https://soundcloud.com/yukonblonde/sets/yukon-blonde-on-blonde-out

Chart: Shut Up and Dance - Walk The Moon
Recorded by American alternative rock band Walk The Moon, 'Shut Up and Dance' is the band's biggest single so far and comes from their second studio album 'Talking Is Hard'. Even though it was released back in September last year (2014), it's only recently hit the top of the alternative songs list on the UK iTunes. However, it's done great worldwide, peaking within the top five in the US, Australia and Canada and within the Top 20 in Sweden, New Zealand and the Netherlands.

Shut Up and Dance - Walk The Moon (link)

Live Performance: 2Shy - Shura
British singer/songwriter and producer, Shura, performs her brilliant 'indietronica' track '2Shy'. Her previous work with Hiatus and solo tracks, 'Just Once' and 'Indecision' led to a growing following and support for her music. At the start of this year, Shura was longlisted on the BBC Sound of 2015 poll, and her debut album is due to be released later this year. Shura has an exciting year and future ahead and I'm sure that will include many more brilliant tracks being released.

Cover: Talking Body - PVRIS
Meet American rock band PVRIS from Massachusetts, made up of Lynn Gunn, Alex Babinski and Brian Macdonald; here they cover electropop track 'Talking Body' by Swedish recording artist Tove Lo. 'Talking Body' serves as the latest and second single from Tove Lo's debut studio album, 'Queen of the Clouds'. The song peaked within the Top 20 in the UK Singles Chart and US Billboard Hot 100. (I also massively suggest having a listen to PVRIS' debut album 'White Noise' - it's brilliant!)

Soundcloud: Sore Feet and Heartbeats - The Magnettes
Swedish duo Rebecka Digervall and Sanna Kalla, are The Magnettes and here is their debut single 'Sore Feet and Hearbeats'. They've recently finished a successful run of showcases at SXSW in Austin, Texas and have played at many events including New Music Seminar, Nordic Days, Qstock and The Great Escape. The Magnettes will begin writing and recording their debut album later this year in Sweden and the UK, so keep your eyes peeled and your ears tuned!