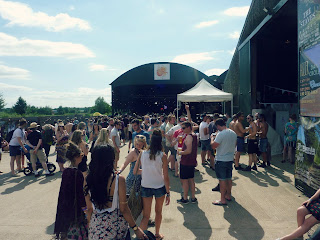 Barn on the Farm, is perfect for finding new up and coming artists that you may not have heard of before, and for me that was I.AM.L. After hearing her soundcheck whilst eating breakfast at my tent, I knew I wanted to head down to the arena and find out who it was. A rather wonderful mix of Florence and the Machine, Kate Bush and Lauren Aquilina with a unique edge is the only way I could describe her sound and as BOTF forecasted, it was definitely a magical moment! Chilled but powerful, electronic and layered perfectly, creating not only a brilliantly unique sound but adding intense lyrics, leaving a set list full of amazing songs. (I'm looking forward to being able to download or own a single, EP or album...)

Ava Lily was the next artist I saw, on the New Stage, she took 'singer/songwriter' to a whole new level, wonderful, soulful vocals and beautiful songs. Phil from Chasing Grace played guitar for her, as well as Ava Lily playing keys, 'Burn' was one of my favourites from her set, as well as 'Sober'.

I headed to the Main Stage to see Billie Marten, again another singer/songwriter that steps up the game. Playing popular songs of hers ('Ribbon') and a cover, with and without guitar, just proved how versatile she can be within her genre. She is one of my current favourite artists, mainly lyrically, she manages to draw the listener in pretty darn well, so young and full of promising talent!

I had a walk around and on the way back towards the main stage, went past Jasper In The Company of Others, smashing the Wooden Barn Stage, the energy was unreal and everyone seemed to be really enjoying it, just gutted I hadn't gotten to see a little more, so they're one for my future gig list for sure!

Passive Smoke - Jasper In The Company Of Others (link)

Model Aeroplanes took to the Main Stage, despite the rain, everyone was going for it and they're the kinda music you can't help but dance to, so that went down well.

I caught snippets of HAUS and Cash+David and they both sounded brill, again a little gutted I didn't catch more of each set, so will be having a listen of some of their music here and there.
One artist I was super excited for on the line up was Kimberly Anne and I wasn't disappointed at all! The sun came out for her set and she did a fab job. It was her first live set up with a band and they all added something to her set up. Performing her better known tracks 'Start Over', 'Bury It There', 'La La' and 'Hard As Hello', as well as a cover of 'Show Me Love' which got everyone singing along and a requested performance of 'Kind Regard', just Kimberly and her guitar and a new song. The whole set was great and I there wasn't one song I didn't enjoy.

Another highlight from my weekend was Chasing Grace in the Wooden Barn Stage, I really enjoyed 'Tonight', 'Silence' and 'Hercules' and 'Halfway' (so pretty much their whole set) and they did a wonderful cover of 'I'm Yours', which included a marriage proposal, adding to the atmosphere! (I got home and bought their album... yeah they're brilliant!!)

The immensely talented Jack Garratt, was next. It just highlighted why I love him and his music so much, he puts so much into it and everyone was loving his set, which is hardly surprising! The whole of his set was brilliant, 'Water', 'Chemical', 'The Love You're Given' and finishing with 'Worry' was the cherry on top of the sundae (unwitty pun - apologies!). Seriously though, this year Jack has been hitting festivals hard and if I don't get to see him on his tour later this year, I'm gonna be annoyed!

Lauren Aquilina was another highlight of the weekend, performing her singles 'Sinners', 'Lovers or Liars' and 'Fools', mixed in with new songs, like 'Dirty Midnight' (which are sounding great, her album is going to be a hit) a little more built up and upbeat than previous songs on her EPs like 'Talk To Me' and 'Lilo' and a cover of 'Sex'. It was a great set, with faster tracks mixed with slower, sadder ones, you can understand why she supported Taylor Swift recently!

The headliner for Sunday was the one and only James Bay, who did a brilliant job of bringing the festival to a close. Performing crowd favourites like  'Let It Go', with the brilliant 'Best Fake Smile' and 'Scars' mixed in between with other tracks from his album. He also threw in a cover of 'If I Ain't Got You' which warmed everyone up for the finale 'Hold Back The River'. His set was full of energy, grit, soul, the list could go on.

I had a great weekend and I know for sure I'm not the only one. Joshua and the team do a brilliant job each year and I can't wait for Barn on the Farm 2016! If you want to keep up to date with them, their links are below! (They upload some brilliant sessions from the weekend up on their Youtube channel as well, so be sure to check that out!) and the first half of this blog review is here.