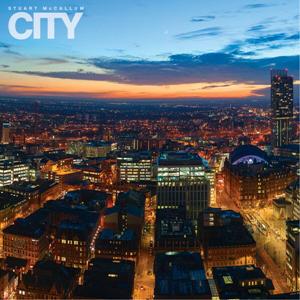 Manchester guitarist and composer, Stuart McCallum is back with his fourth album, 'City'. The release features a handful of seasoned musicians, as well as guest vocalists on four of the tracks. Since his debut release with Naim, 'Distilled' in 2011, McCallum has been busy with a range of other projects, including several collaborations with British artist Linder, scoring music for Northern Ballet and working in an acoustic duo setting with Mike Walker. His eight track release 'City' is also accompanied by a string of live dates; keep your eyes and ears peeled!

'City' Album Review:
The release opens with title track 'City', which features beautiful vocals from JP Cooper, these compliment the guitars and percussion really well, bringing it all together to create an all round brilliant track. 'Inhale' is a slower track, which allows you to pick up on all the stunning intricacies of the song, which can be found in the other tracks too. Sharlene Hector's vocals on 'North Star' offer that soulful hip-hopesque feel of 90s female singers, which adds to the uniqueness of McCallum's overall sound. Another stand out track to me is 'Said and Done', which features Sophie Barker, yet another beautiful song with a seemingly haunting twist to it.
Overall, the album has a lot to offer, it's very easy to listen to - a gift to the ears; exploring the broadness of jazz. Stuart McCallum has done a brilliant job of marrying jazz and ambient electronica together and making it seem very relevant (which I feel is needed in the current music scene). I really urge you to spend forty minutes of an evening, just listening to this album and relaxing, it really is worth it!