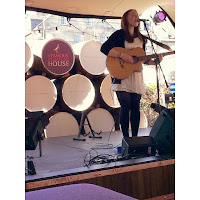 Sophie is a young acoustic singer-songwriter from Penicuik, Scotland. She's received backing from local radio and played numerous gigs locally, including Oxjam Dunfermline and The Famous Grouse House during Edinburgh Fringe 2015. She's been uploading videos to YouTube over the past two years and now Sophie's released her debut EP 'Say Goodbye To Your Youth', we caught up with her to quiz her on all things music...

1. How old were you when you started getting involved in music and how?
I started playing cello in P4 when I was around 7/8 but quit shortly after because it just wasn't something I was good at. I then tried to learn guitar in S1, at the age of 10/11, my brother's friend Robbie tried to teach me, but again I quit as the G chord was 'too difficult' and I decided maybe listening to music and not actually playing it would be my thing. It wasn't until 2011, when I was 12 that I picked up music properly and haven't stopped since. I wrote my first song 'Sleeping With The Angels' on November 1st, just under a month after my Mum passed away and found it was a way I could explain how I was feeling and what was going on without actually using direct words. From then I taught myself guitar and picked back up the cello, along with teaching myself ukulele, singing, a bit of piano and a bit of bass, with the help of friends and the school's music department.

2. What is the most inspiring musical performance you've ever seen?
I have to say it's between The Staves at the Queen's Hall in Edinburgh, or any one of the times I have seen Blue Rose Code live.

3. Who have you been listening to lately?
I constantly listen to a massive range of things, and don't really ever just listen to one specific artist or type of music but lately I've really been into Blue Rose Code, Fatherson, The Staves, Bear's Den, Frightened Rabbit, Lauren Aquilina, Bright Eyes and Hudson Taylor.

1. Who would your dream collaboration be with and why?
Either Regina Spektor, Ingrid Michelson or Lauren Aquilina as these are three artists I completely admire and have listened to for a very long time. And I've always believed lyrics are the most important part of music and these are the three people who's lyrics I absolutely adore. But if Frightened Rabbit asked I wouldn't be saying no...

2. What is your usual songwriting process and how much does it differ from song to song?
I usually get a phrase stuck in my head and it stays there for ages and doesn't go away until I write it down. And from there I just write everything that comes out until I have nothing else to write. Each one of my songs has the alphabet on the top of the paper, but I'm not sure if that's just habit or a part of my writing process. Lyrics always come first, and then I just play around with chords until I find something that fits what I'm wanting to say. Tea is also part of my usual songwriting process, lots of tea...

3. Which track on your EP 'Say Goodbye To Your Youth' means the most to you and why?
'Ghosts' would have to be my favourite one on the EP because of the meaning behind it. I wrote 'Ghosts' about how nothing is ever enough for any of us and we always find something to complain about and even once we have what we want, we just find something else which is wrong. The meaning behind 'Ghosts' is that if we were ghosts looking back and reminiscing on life we'd actually see that so many amazing things are going on around us, we just need to pay more attention.

'Say Goodbye To Your Youth EP' Review:
'Say Goodbye To Your Youth' is a wonderful EP from the first note to the closing one. 'Ghost' opens the three-track release, I think it's fair to say it's a raw and melodic sound and beautifully haunting. 'Blue Blood' holds a true acoustic Scottish sound, with stunning harmonies and a swaying rhythm, the kind you'd hold a lighter (or iPhone torch) up to during a live set.
The EP closes with 'Oh Brother', my favourite from the release. Again, some stunning harmonies and guitar, both working alongside each other perfectly. It grows into an upbeat track. Overall, a fab EP and I can't wait to hear even more from Sophie in the future!