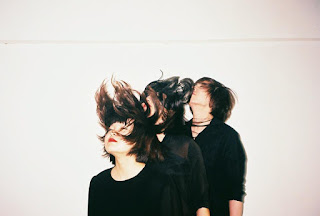 Nova Heart are a pretty big deal in China and have started to cause a ripple over here in the UK, as well as the US. Helen Feng (vocals/keys), Bo Xuan (bass) and Shi Lu a.k.a. Atom (drums) have already gained support for previous releases from NME, Rolling Stone and The Guardian and have built up 700,000 streams on Xiami (media streaming platform), over 200,000 views on LeTV (Chinese Netflix) and 150,000 hits on Yoku (Chinese YouTube). They've recently been on a successful European tour including a performance at Glastonbury Festival and they've just released their self-titled debut album.

'Nova Heart' Review:
The album opens with 'Drive To Our End' an intense and mainly instrumental track, led by bass, a steady rhythm and space themed synths, this track really starts the adventure into something out of this world. The latest single from the album, 'Lackluster No.' is a dreamy track, incredibly easy to listen to, vocals from Helen add to the song and accompany the bass and keys perfectly. There are also catchy riffs that carry through the song well. 'Interlude' is one of my favourite tracks from the release, it's haunting, atmospherical and incredibly creative - I really love it! The album closes with 'Dancing Barefoot', the layered vocals highlight the lyrics and the alternating volumes and directions of the track hold the listeners attention and allow them to solely focus on this fantastic creation. This album is a brilliant masterpiece, I really hope Nova Heart, gain more attention and support from the UK and the US, as well as the rest of the world; they truly deserve it!