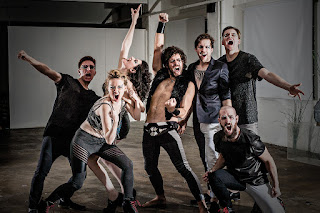 Felix Hagan & The Family are a seven-piece, formed in 2012 and fusing punk, rock, pop and musical theatre into a seamless, high-energy blend of genres. Consisting of Felix Hagan (lead vocals), Ellie Cowan (backing vocals, occasional violin), Tash Hodgson (backing vocals, percussion), Tom Webber (lead guitar), Chris Hunsley (bass guitar), Joe Davison (keyboards) and Stuart Mann (drums), their hugely energetic performances have won them shows on festival stages up and down the country, as well as a high profile support slot with Frank Turner. They've just released their latest EP 'Kiss The Misfits', so we caught up with Felix for a Q&A about that and the rest of the world of music...

1. How old were you when you started getting involved in music and how?
I was eight. And I was the terrible precocious rosy-cheeked cherub playing the theme from the Wobbles on the trumpet in the school concert. Then I started on the drums at 10 so I could REALLY start to annoy people. My first gig was aged 11, playing drums with a band of men in their fifties at a party on the Isle of Wight. It was the most exhilarating feeling I'd ever experienced. Then I got into guitar because my big brother played it (he's still way better than me), then the piano because we had one at home. Then I spent five years at school playing in the big band, the brass band, the orchestra, the choir, the musical theatre group and my own band of wide-eyed rock and roll dreamers. I wrote my first proper song at 13 and that was it, really. Cue stardom and fabulous wealth.

2. What is the most inspiring musical performance you've ever seen?
I went to see Amanda Palmer do a special intimate gig at Village Underground in Shoreditch for her Kickstarter backers, of which I was one. 185 people in a huge, cavernous old factory space. She curated some awesome support acts, then we all sat on the floor as she toured us through a load of songs with her band, singing through a megaphone and playing the ukulele. Then the gig ended with us all writing messages in marker pen on her naked body. It was a show that managed to include moments of total euphoria, heartbreaking sadness and hysterical laughter. It was hugely theatrical and reply, bleedingly honest. And I'm still thinking about it three years later.

3. Who have you been listening to lately?
I've been playing the new Enter Shikari record to death. It's the best produced record I've heard in ages. And it's mental. I love it. A friend of mine also recently turned me onto Run The Jewels, and their album 'Run The Jewels 2' is fucking dynamite. I also keep coming back to the New York Dolls Live at the Bowery record, which is just everything. Kate Tempest's album 'Everybody Down' is just perfect in every way. And thanks to going on a tour with Louis Barabbas I now can't stop listening to different cast recordings of the musical Oliver.

3 Qs for Felix Hagan & the Family:

1. What decade inspires you the most and why?
Musically, I don't have any tangible time period for inspiration. I like to listen to everything I can find, from old Cole Porter shows from the depths of history to batshit strange hip-hop from last week. When I write a song. I want to be able to start with a battered acoustic guitar or a weird synth noise and everything in between. That way freedom lives, I think.
Lyrically, the last 10 years. I tend to write quite autobiographically, and the last 10 years have seen me leave school, travel all over the world, go to performing arts school, drop out, get totally fucked up, go to rehab, get better, go to university, get married and have a child. So there's plenty of grist for the mill right there.

2. What process did you go through creating 'Kiss The Misfits' both musically and visually?
I like to make my records differently every time. The first one was me holed up in my parents' attic with some cheap microphones for six months. The second EP was me in a different attic, but this one belonged to Ray Davies, and was then mixed by the keys player in the band, the great Joe Davison. Then for this one I decided to use the Family. So I demo'd all the tracks in my studio, the band all learned, tweaked, rewrote and improved all the parts, then we gutted Joe's studio, took it out to the countryside and recorded the whole thing in a week.
Visually - sweat, glitter, sex, death, euphoria, fire and that roaring white light that fills your head when you get on stage and lose yourself completely.
I wanted the EP to be a celebration of everything I think is important. The way my songs tend to work out is that they're hugely upbeat songs about very depressing things. So 'Chance It In The Fire' is about dealing with monstrous self-destructive impulses and keeping them at bay. 'Some Kind Of Hero' is a ons I wrote when someone I love more than life itself was going through a serious episode of depression. 'Get Well City' is a drinking song about going to rehab. 'Eddie Baby' is a sort of lament for all the band I used to play in the fell apart. And the title track, 'Kiss The Misfits', is a pretty self-explanatory statement of my beliefs. Get out of the fucking office, jump in with the freaks and weirdos. And let's dance.

3. You celebrated your EP release with a headline show at The Monarch, Camden. How important do you think it is to keep small music pubs / venues alive and going and why?
Well. You could close all the supermarkets and people would starve. You could shut all the banks and people would starve. Shut all the venues? Then fucking hell. What have we got? Strictly Come Dancing? Fuck that. The people need music, and young people need to teat their souls out and hurl them at crowds in small towns across the country. They're the aura of culture, the shooting stars that camel out all the boring. And I built my whole life on the desire to go into them and yell. So folks, support your local venue. Because without them life is meaningless.

'Kiss The Misfits' Review:
'Kiss The Misfits' is a high energy, upbeat and feel good track. Whilst listening to the chorus, you are left with no choice but to sing / dance along. With an infectious and wonderful guitar section, and solid instrumentation throughout, the musicianship and positive spirit not only comes across in this song but in the video too. If you need cheering up, this is a must go-to song! I'm also sure that once you've heard once you'll be wanting to replay it again and again...