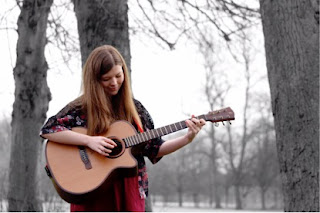 Katy Galloway is a 17 year old singer/songwriter from Cheshire, UK. Over the past two years, she's been uploading covers and originals to YouTube as well as gigging locally around Cheshire and the North West. Now with a unique sound as an acoustic country / pop artist, Katy has recently released her debut EP 'Games' and she's already looking towards her next release...

1. How old were you when you started getting involved in music and how?
I have two older brothers who are quite musical and from a young age I looked up to them, then when I was in Year 2 (seven years old) I was given the opportunity to have flute lessons in school which I did until I was 16. I started singing when I was about 9/10 and started getting picked for solos in the school choir and in the plays, then when I was 14, I started writing songs and I learnt guitar so that I could accompany myself. It started from there really!

2. What is the most inspiring musical performance you've ever seen?
I know she isn't everyone's cup of tea but personally she is one of my biggest inspirations... I saw Taylor Swift play at Hyde Park BST Festival this summer and it really was one of the best shows that I have ever seen. I love her music as it is and I have seen her shows before but the combination of her music, the incredible show she had put together with the dancers and sets, the atmosphere of the day and being front row at the barrier was a completely incredible experience. When she played 'Clean' it was one of those really cheesy moments when you are watching and think 'Yeah, this is what I want to spend my life doing'.

3. Who have you been listening to lately?
I listen to a lot of music! I always have a bit of Taylor in my playlists along with artists such as Lauren Aquilina, The Band Perry, Betsy Lane and Kacey Musgraves. Then I have all the musicals soundtracks that I have on my phone as well!

1. Where did you gather inspiration for your EP, both musically and lyrically?
The inspiration for the lyrics is completely from events in my own life. Sometimes they aren't written completely about my own experiences, they could be things my friends are going through but they are always based off of first hand experiences as I think that is the best and most authentic way to write. Musically, I get a lot of inspiration from the artists above that I have been listening to so Lauren Aquilina, Taylor Swift and Betsy Lane to name a few.

2. You've posted covers to your YouTube channel for around two years now, how do you choose which songs to cover?
A lot of the time I have no clue which songs to cover! Sometimes people ask me for specific songs that they'd like me to cover, sometimes I just feel like covering a certain song I have been listening to a lot, if there's a new song in the charts that I want to put my own spin on I'll try that and sometimes I just shuffle all the songs in my library and let that tell me what to cover!

3. Which is your favourite track from your debut EP 'Games' and why does it stand out to you?
All of the tracks on 'Games' mean different things to me and I picked them for the EP as, although at the time I was picking them, I had written songs that I thought were better, these songs all went together sonically as they were all written at a similar time in my life when I was 14-15, so I thought they made the best 'set'. As for my favourite track it would have to be either 'Games' itself or 'Average' as 'Average' is one of my earliest songs that I wrote and 'Games' was the last song I wrote for the EP and after I had written that I decided that I wanted to make an EP and start to take music more seriously.

Favourite musical and why?
That's so difficult! I'll have to go with the one I haven't been able to stop listening to recently which is Finding Neverland. It's on Broadway at the moment and hopefully will have a West End transfer soon so I can see it! All the songs are so beautiful and I have always loved Peter Pan as a story, so a musical about it is just perfect for me!! I also really love another musical that's on Broadway at the moment called Something Rotten as the songs in that are hilarious! Hopefully that will also come over to England soon!!

'Games EP' Review:
'Games' is the title track from the EP, I think this is my favourite from the release, as it's not over complicated, has stunning piano underlying the lyrics and a steady beat throughout. However, each song has certain elements that I think stand out, for example, the layered vocals creating harmonies on 'I'll Never Leave You', the country and folk elements of 'Average' and the lyrics in 'Memories We Made'. As Katy's first EP and considering these were some of the first songs she wrote, it's a fantastic release, with a lot of potential for the future. You can hear the influences of musical soundtracks in her original music, but whilst listening to the EP, I also found it reminded me of Becky CJ. Katy Galloway is one to keep your ears out for in the future folks!