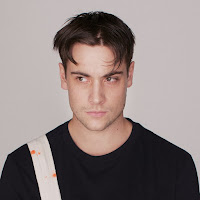 Mavrick (a.k.a. Marcus Sennewald) is a 'pop drum & bass' artist. He is signed to Polydor Sweden and is in the process of finishing his debut album, which promises to push melodic boundaries by experimenting with less structure and more freedom. Mavrick has received support from The Guardian and Indie Shuffle, and his latest single 'Remedy' has already spread like wildfire in Europe and the US. So we caught up with him for a Q&A about all things music...

1. How old were you when you started getting involved in music and how?
I was 12 I think. We set up a musical in school, 'Hair' I think. I didn't know that I could sing, but when I hit those first notes of 'Aquarious' I felt a feeling superior to all other feelings I've earn felt. 'When the mooooooon...' Man!

2. What is the most inspiring musical performance you've ever seen?
Without a doubt Prince. I stood at the front crying out of pure joy the whole concert. When he played a guitar solo with one hand, an organ solo with the other and painted a picture with a brush in his mouth at the same time I vaporised and vanished from the face of the earth. I'm still at this day a little moist.

3. Who have you been listening to lately?
A lot of Arca and Bobby Womack

1. How would you describe your sound in five words?
Put some chaos in pop

2. Who would you most like to tour with and why?
I would love to go on tour with Atoms For Peace. I fucking worship Thom Yorke and I really want to become best friends with Flea, he seems like the funniest person. But most of all I just want to steal their beats. But who am I joking... they're way too cool for me.

3. What process did you go through creating 'Remedy', both musically and visually?
'Remedy' is really just an experiment, our Frankenstein's monster. We wanted to make something that included all of our strongest influences at the moment. Straight forward pop, the playfulness and soulfulness, the intensity of the drum and bass, the trippy trap and the beautiful and powerful gospel. I've always liked the thought of being a mad scientist.
But most of all we had a naive vision of making a pop song that didn't like any other pop songs in the charts.

Favourite movie and why?
Ah this is where I should show my deep and sophisticated style, drop lines from Casablanca and tell you that Ingrid Bergman is the reason I exist. But I'm sorry... there will never be a better movie than Step Brothers.

'Remedy' Review:
'Remedy' is a fantastic track alone, but coupled with the video too it comes a bit of an artistic masterpiece. The intensity and pace of the onset is highlighted by the music video, but when the track cuts and grows back with layered vocals and fades out again, it holds a haunting and emotive tone. I cannot wait to hear more from Mavrick.