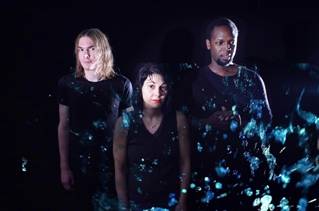 1. How old were you when you started getting involved in music and how?
When I became an animator - the sounds of my films where a huge importance... I then realised that music had a greater room in my life and started singing, around the ago of 29...
For me, singing was like a new storytelling tool - a 'sound paintbrush' to create with, or, sculpturing with air - while breathing in and out - I felt I can make stories quicker that way and connect with more people in an immediate way... So I wrote my own music based on my lyrics and singing, and created my own shows with a theatric feel, as coming from a visual artistic field, it had to have also an aesthetic side. After a while - it also became a band ;-)

2. What is the most inspiring musical performance you've ever seen?
In recent years I got inspired seeing The Secret Chiefs 3 play - the first time I'd seen them had been 4 years ago - It was at London Garage and it made my jaw drop - They played their normal blend of Math Rock with influences of Iranian music, Indian Bollywood music, Black metal, and those Surfing Rock guitar riffs... and covers from iconic film composers like Bernard Herman to Classical composers, and Spaghetti Westerns...
You got to see it LIVE to believe this - my ears were melting - I didn't know their albums and nobody prepared me for such high musicianship!
The music is both crafted and complicated, and filled with musical humour and wit, whilst keeping an improvisational side too! The audience were all high on the music! And so did the band - guitarist Trey Spruance, (former of the bands Faith No More and Mr. Bungle) was jumping around with his guitar and smiling  to the audience whilst playing the most complicated tunes - it was like a circus of sounds - you wouldn't know what else these guys would pull out their cloaks! If you are a rock fan their show is a must!
It inspired me to go study world music more deeply, and start an MA in Mediterranean singing. I'm no longer 'feeling out' my way in those areas of music but have knowledge of what it is that I am doing. I got serious and deep about world music and about composition as a result.

3. Who have you been listening to lately?
As someone that had been involved in a few rock scenes, I just got an album from a friend's band in Tel Aviv - Tel Aviv Rock scene is filled with surprises, little gems of original music... Such band is DRY... The vocalist Dymitry Polikov sounds more mystic than Nick Cave in his preaching moments, the cellist Ran Nahmias made his own electronic cello instrument using a cello's bow and a wooden plate of effects and loops, and the drummer Itay Sandowski intensify their musical dynamics. The albums sounds like an atmospheric movie with strong colours and blurred characters being both trapped and totally free! The cello loops create a 'zen' balance to the theatrical feel of the lyrics... The first track 'Zvuv' ('a fly' in Hebrew) is the only track sang in Hebrew, with strong lyrics and cello riffs so haunting which set the mood to a totally exceptional work of music. (https://dontrepeatyourself.bandcamp.com)

A few months back a friend of mine sent me a track I loved - it was by the sound artist / producer Katie Gately, and it is filled with vocal / electronic sound landscapes and ideas... A track called 'Pivot' grabbed me - it is released on Fat Cat Records in the UK. Katie's production is spot on and the atmosphere is quirky, sensual and deep. Hmm... my kind of a woman! (http://www.katiegately.com/music/)

Another gem sent by a friend is 'Arthur and Punishment' - a heavy metal bassist called Tristan Shone - that became a 'one man band' when he engineered his own exclusive gear of 'dub machines'. He creates non compromising electronic tunes! My favourite is a track called 'Lonely'. I like musical inventions and I am attracted to the most extreme forms of sounds - I've been like that since I was a teen, and always happy to discover new musicians who manage to break all boundaries. (https://vimeo.com/15829164)

1. 'Mesumamim' means 'On Drugs' in Hebrew, what led you to this subject and what does the track mean to you?
I called it 'On Drugs' although I never really take drugs. 'Drugs' is used as a metaphor here. I was trying to talk about how sometimes we escape from life or, living life half numb, as if 'on drugs'.
I have seen so many people that had been totally scared or overwhelmed with their urban life. They followed some escape mechanisms that they invented or took on themselves... Like, being drunk often, being a workaholic that does not enjoy anything else but an exhaustive grind, going to parties in order to forget yourself, or even going on a daily routine that is draining you without changing it 'cos it feels too much to handle when all you are trying to do is keep your head above water...
The song is trying to capture that emotional neglect, but also remind us of togetherness and how we can overcome that by laughing about it all with our best friends, reminding ourselves it is just a phase, and not life itself. We have to unite with the people that we love, and connect ourselves with the flowing pace of nature, try to break free from whatever that is locking us.

2. Where in the world would you most like to perform live and why?
I would love to perform in Japan - many people told me that the SPIRITWO Aesthetics - with the wild eclectic theatric appearance, together with the blend of rock, electronica and world music could work well over there - as there is audience that loves theatric qualities and very interested in exceptional foreign / cutting edge music in Japan. A booker from Japan actually approached me once after bumping into our music online, so maybe one day... one can hope ;)

3. What process did you go through creating your latest single 'Mesumamim' and how did it differ to other tracks of yours?
The song is about some kind of emotional neglect, so when I was designing the electronic drums, I designed a snare that will sound like a gun shot - a 'slapping' menace of self damage... hinting something suicidal...
I have also asked Charlie Cawood, who plays many world music string instruments - to put some Arabic Oud in the song, to have a deep, 'heartfelt' sad tone to it... but he chose the Turkish Saz... that has a 'lighter' higher pitch...
So I think we ended up with wide sound landscapes, a bit of 'Sahara' with my Mediterranean singing style... a bit of 'Nevada' with a romantic void of a distant gun shot...
Image wise, I remembered my first ever SPIRITWO shoot with Frankie Eden in 2006 - in those times, I have performed live in big queer underground events in Tel Aviv with a huge wig and latex dresses (before Lady Gaga came around, of course) posing pure decadence and glamorous witchcraft...
I decided I can re-use the images and collide them with amazing nature landscapes shot by photographer Jon Bagge - creating a clash between beautiful natural things existing in the world - and how we might miss them being out of touch...
So, in the video we mixed the images up by putting some slugs on a bed, plotting up a sense of absence, emotional blindness and then - jumping into heartening brightness of nature pictures in time lapse... and... of course, a splash of water, to make the drama more wet!!
I think 'Mesumamim' is defiantly a 'We Dessert Hardcore Zen song' :)
It is a very deep tune, and that is actually something that exists in other tracks that I have been writing over the years...
The difference is in how many skills developed in terms of production, and how I try to combine more Mediterranean feel in the music, how my voice can introduce both Arabic singing techniques whilst keeping it in a frame of a rock ballad concept. I am becoming better in crafting the two over time, whilst coming up with a sound that is unique to us.

Why / how did the name 'Spiritwo' come about?
Oh, well,, it describes the 'second spirit' that comes out of us when we are on stage!
That wild side in a performer that reveals itself in a live situation, and sometimes can't be noticed in everyday life.
In everyday life, some people look so normal, reserved, or even shy - and then you see them on stage - and you wonder where was all this energy hiding?? - The 'second', 'other' spirit in them got unleaded! ;) I think we all have that, and when have the right platform - we can convey traits that we don't usually show! That is of course a good thing - that release - that place that you can express everything you've got.

'Mesumamim' Review:
'Mesumamim' is an intense and dark track despite the upbeat tone; the irraticness of the Turkish Saz and definite drum beat highlights this. It's really refreshing to hear a great alternative rock / electronica track being influenced and including world music too. This is an inspiring creative wonder  and I'm more than sure (and hopeful) there's going to be more fantastic work coming from Spiritwo in the future...