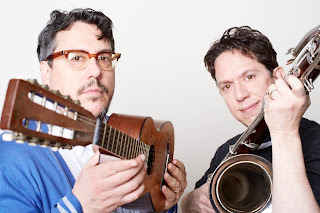 You've probably heard of the Brooklyn-based duo, They Might Be Giants, and if you don't recognise the name, I'm sure you'd recognise at least on of the tracks from their long and successful discography. Known for their Grammy-winning theme for Malcolm In The Middle, multiple live TV appearances on Conan O'Brien, Jimmy Fallon and Craig Ferguson, as well as the theme for Disney's Mickey Mouse Club House and Higglytown Heroes. They're coming to the end of an incredible year, releasing a new song (and video) every week through their Dial-a-Song project, releasing two albums - the latest being 'Why', an album for all the family - and touring non-stop, which will continue into the new year when they returned to the UK in January 2016...

'Why' Album Review:
This album is full of character, and truly is a perfect album for all the family. With pop and rock flowing through each track, the creativity amongst each is wonderful, as well as the pocket-sized sound bites of optimism and pop brilliance. I'm a little bit in love with this album and for this to be their second album released this year they're really doing things right! Tracks you have to listen to include 'Omnicorn', 'And Mom and Kid' and 'Elephants'.