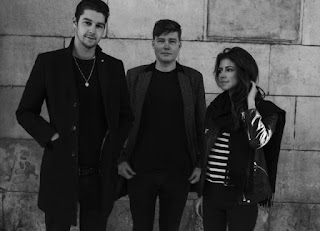 Evawolf formed in London last year (2015) and consists of Joey (guitar), James (drums) and Natalie (violin). These East London newcomers create music combining rock, pop, soul and folk; their debut offering showcases this well, their first taster of music 'When The Truth Is Out'. We caught up with the trio for a Q&A...

1. How old were you when you started getting involved in music and how?
Joey: I saw my first guitar in a charity shop window when I was eight years old, and was deeply envious that my Dad was able to play 'Smoke On The Water' on it. I vowed to learn, and I played along to old records until it made sense to start playing in bands. Learning that song is still on my to-do list, however...
James: I was actually seven when I received my first drum kit. But didn't start getting into playing properly until I was around 12. My Dad is a drummer, so I would just watch him and try and recreate it on my own kit.
Natalie: I've played piano and sung since I was super little but first picked up a violin when I was 7. I started playing in jazz band and orchestras and bluegrass festivals, so my sound is sort of a hybrid of the three.

2. What is the most inspiring musical performance you've ever seen?
Joey: Roy Orbison's Black and White Night is pretty special. His performance is both uplifting and melancholy, and he is accompanied by an all-star backing band, which features Bruce Springsteen and Elvis Costello, to name but a few.

3. Who have you been listening to lately?
Natalie: Father John Misty, Ryan Adam's 1989, Christine and the Queens, and Rhodes.

1. Why / how did you choose 'Evawolf' as your band name?
Joey: I saw Evawolf written in graffiti inside a WW2 bunker in Normandy, France. I was on a school trip at the time, and I don't know if that's exactly what it said, but it sounded really cool, and I always knew it would make a great folk rock band name.

2. If you could invite three people, dead or alive, to a gig; who would you ask and why?
James: John Bonham, John Lennon and Noel Gallagher. All three have a great quality separate from their musicianship, which is the ability to see the humour in most things. Lennon and Gallagher would be a laugh on a night out and Bonham was a drinking machine who I could get drunk with and talk drums.

3. What process did you go through creating 'When The Truth Is Out' and did it differ to other tracks from your debut EP?
Joey: 'When The Truth Is Out' is all about escapism; it's about dropping everything, getting away from the busy streets of the city, and pursuing a simpler life with the one you love. Our upcoming EP deals with similar themes; heartbreak, our accomplishments and regrets, and the way we perceive ourselves and others.

'When The Truth Is Out' Review:
As the first track to be released from their debut EP, 'When The Truth Is Out' offers a fantastic taster of what's to come! It's a steady folk track with influences of rock and pop seeping through the gaps, it would be great to singalong to live - and just as great on your own at home at the top of your lungs. Harmonies, steady guitar, a detailed drum line and violin laying in between is simply stunning. Whilst slightly reminiscent of Noah and the Whale, we enjoyed this track as a unique sound and are looking forward to their next release already!

When The Truth Is Out - Evawolf (link)