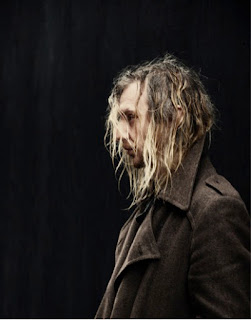 Singer/songwriter Kieran Leonard has recently returned with the release of his latest single 'The Greatest Show On Earth'; it began as an improvised idea and became a 15 minute, one take live recording. Previous releases have garnered a huge amount of support, his debut album 'Out Of Work Astronaut' was voted one of BBC's Albums of the Year in 2012, and the first single from his last album 'Underwood Milk', was picked as one of their 'Hottest Tracks'. He's since gone on to compose songs for 'Get Him To The Greek', the blockbuster starring Russel Brand, Kieran's shared stages with Bob Dylan, The Strokes and Beck and has toured with The Libertines and Ryan Adams. We caught up with him for one of our most creatively inspiring Q&As yet...

1. How old were you when you started getting involved in music and how?
Music was always present peripherally in my life, some of my earliest memories are sitting in the back of my Mum's car listening to The Beatles and Barry Manilow on the cassette player. I went on to become obsessed by one of those artists...

2. What is the most inspiring musical performance you've ever seen?
Timely given the sad news recently, but it was when I was 13 my Mum sat me down and made me watch Ziggy Stardust at the Hammersmith Palais, the Pennebaker film. From that point everything pretty much changed, there was a new element on my periodic table, it recontextualised what I thought music was or could be. And it was cool and scary, two attributes I continue to aspire to.

3. Who have you been listening to lately?
As usual I am listening to lots of old stuff really, Scott Walker has been on a bit, Iggy Pop (the Idiot record), Patti Smith is never far from my record player, with Bowie's latest release, I have been re-visiting the Berlin years and trying to de-code 'Blackstar', which is a beautiful and now very poignant record.

1. Why do you think it's important to link the connection between art and music and how do you think that affected your decision to perform 'Greatest Show On Earth' the way you did at Newspeak House art gallery?
To me they are a synergy, one and the same. Essentially the same practise in a different medium, all good music is art, and all good art is at heart informed by the same values as good music. Message, integrity, craft and vision. The gallery show at Newspeak House just seemed the perfect way to frame and explain the array of ideas in the song. It gave the a good space to exist in and allowed us to create a truly immersive and subversive experience. It was something I have always wanted to do in my music and 'The Greatest Show On Earth' seemed to be the perfect fit for attempting something like this.

2. If you could write a theme for any TV show/film, which would you choose and why?
Columbo, or Luther, any of the really good detective shows, they are the only actual TV I watch, I am fascinated by the genre, the curious stories and odd personalities.

3. What creative process did you go through writing 'Greatest Show On Earth' musically?
That was quite a strange process and almost entirely unconscious, I pretty much made the song up on the spot the last night in the studio when we were cutting the new record. I had this simple verse chorus turn around, that the band just starting vamping on it. It was the final night of a very intense two weeks recording at the Kubrick estate... at around 10pm it suddenly started snowing outside and all these ideas started to come. They were things we had been talking about and considering over dinners and in-between takes all week and one just seemed to flow into the next, with the band just letting it happen musically. Thank goodness Nick the producer had had the foresight to switch the mics and hit record, as it only happened once and I am not sure it could ever have bee repeated in quite the same way.

Most played song on your iPod?
Currently 'Heroes D.Bowie.

'Greatest Show On Earth' Review:
'The Greatest Show On Earth' is 14 and a bit minutes of pure art. Lyrically, it is incredibly thought-provoking and inspiring; a stream of consciousness and insightful commentary on society and how that affects our lives now. This wonderful combination of genres to create a fantastic sound, with stunning layers of blues / jazz fused energetic piano, bold guitar and a steady drum rhythm tie together brilliantly. Alongside this track is a perfectly timed music video, focusing on the words that Kieran speaks and sings with a slight humour but sincerity just pushes it together as his own masterpiece.