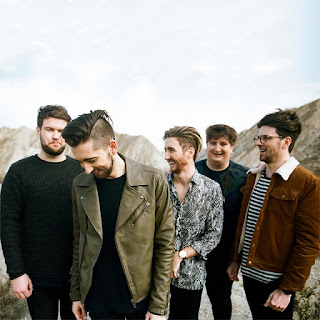 Eliza and the Bear are the Essex quintet to watch this year; as James Kellegher (vocals), Callie Noakes (keyboard), Martin Dukelow (guitar), Chris Brand (bass) and Paul Jackson (drums) tour the UK and release their eponymous debut album - set for release on 8th April (2016).
Starting as a hobby with no intention of releasing records and no wish to play gigs; the band have grown from making music just for fun, to performing on festival stages and their singles being synced everywhere from a Masterchef final, the BBC's Olympics coverage, to a cider advert and a daytime TV gardening show they'd rather not discuss... Whether you know it or not, you've heard their music...

'It Gets Cold' Single Review:
This is the second single to be taken from their debut album, and it's fantastic. It stands true to Eliza and the Bear's indie pop / rock sound and shouts fun, from the track, to the music video, to every time I've seen them perform it live. It's infectious energy and upbeat forces you to sing along and tap along to the drums. All the layers come together to create an incredible sound, a perfect single and I'm very ready for their album, just got a few months to wait, so to fill that time I'll be seeing them on their tour!