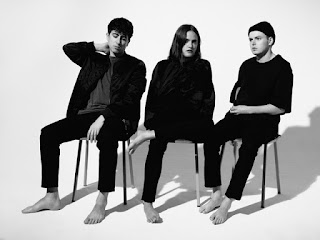 American trio, Wet, comprised of Kelly Zutrau, and multi-instrumentalists, Joe Valle and Marty Sulkow. They met through mutual friends as college students in New York City in 2007, after a few years of informal collaborations, they didn't declare their official music intentions until the summer of 2012.
Their self-titled debut EP garnered industry-wide attention, their track 'It's All In Vain' soared to #1 on Hype Machine and gained a place in Spotify's Viral 50 chart. 'Weak' and 'Deadwater' made it into many 'Best / Favourite Songs of 2015' lists and after a hugely successful tour supporting Canadian singer / songwriter Tobias Jesso Jr. they've announced their own Europe headline tour, which will follow the release of their eagerly anticipated debut album 'Don't You', set for release this Friday (29th January 2016). Wet are a trio to watch and listen out for this year...

'All The Ways' Single Review:
This latest single to come from Wet's debut album is 'All The Ways', a light and ambient track. The synth pads and guitar works perfectly against, as well as alongside Zutrau's beautiful vocals. Holding an emotional and honest tone throughout the track lyrically and melodically. 'Deadwater' and 'Weak' are both stunning songs too, which have graced many playlists recently at Music In Time's desk. What I've heard so far from the album has been fantastic and beautifully crafted, so I'm super excited to hear more and fill in the gaps of the album...