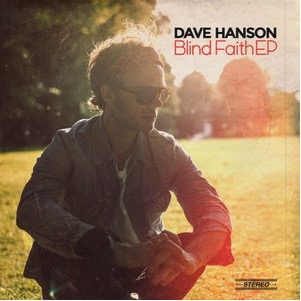 Former lead guitarist and songwriter for the well known band, The Dunwells, Dave Hanson is embarking on a new adventure into the unknown. He enjoyed great success with The Dunwells, who in the past toured with Mumford & Sons, Sheryl Crow and Amos Lee, performed on 'The Tonight Show' with Jay Leno and gained a number of US Top 40 singles. Dave's already proved himself on the band circuit, now he's set out to do the same thing as a solo artist and begins with the release of a new EP and lead single 'Blind Faith'...

1. How old were you when you started getting involved in music and how?
I picked up a guitar at age eight. I must admit I was inspired by the movie Back To The Future - and can remember thinking if I could just learn to play the intro to 'Johnny B Goode', I would be the coolest kid in school!

2. What is the most inspiring musical performance you've ever seen?
Marty McFly? Ha no - but seriously - when I was 16 years old I got to see a show featuring Eric Clapton, Joe Cocker and ZZ Top. That was pretty inspiring for a young kid obsessed by blues and rock music to see all those legends jamming together!

3. Who have you been listening to lately?
I'm really digging the latest Gary Clark Jr. album. I love his diversity of styles and distinctive guitar tone. I'm also a big fan of a band called the Sheepdogs. They've got a cool Levon Helm vibe going on.

1. What has been the highlight of your musical career so far and why has it stuck with you?
Performing on The Tonight Show with Jay Leno, performing a song that I'd written was pretty special - knowing that 8 million people were hearing my music and seeing my play my guitar is definitely a highlight!

2. After enjoying success with The Dunwells, do you miss being in a band and what is the main thing you've found surprisingly easy / difficult going solo?
Well I have my own band now, and there's a couple of girls in it - which is refreshing after being stuck with a bunch of blokes for so long!

3. What is your current favourite track from your EP 'Blind Faith' and why does it stand out to you over the others?
I love the title track 'Blind Faith'. It has this really cool laid back groove, which was recorded with my co-producer Daniel Woodward playing 'Hand, Foot & Leather Jacket'. It's lyrics have a poignant meaning to me as they were written at a time in my life where I was at a crossroads - should I go solo or disappear into insignificance?!

If you could see anyone perform live, dead or alive, who would you choose and why?
I would love to see Jimi Hendrix play - for me he will always be the master of the electric guitar.

'Blind Faith' Review:
This track is a classic old school country blues song, it's catchy and easy to singalong to, with the conventional harmony lines for the genre throughout, honky tonk piano and fantastic hook creating a feel good track that'll make you want to clap and dance along in the summer (or if you're in England, in the rain pretending there's sun around...)