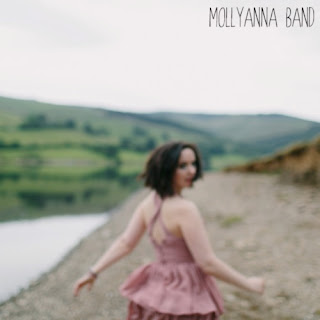 Molly Anna Band, a Sheffield based duo kicked off 2016 with their debut EP release at the end of last month. Molly Anna and Mike Hukins self-produced the 'Ghosts' EP and released the first single 'Villain' in October 2015 to raise funds and awareness for Samaritans, it proved popular and gained support from BBC Introducing. They've already headlined shows in Leeds, performed at Tramlines festival and taken part in an Arts Council funded concert, recognising the work of female composers. Now armed with a debut EP, two singles ('Villain' and 'The Gun') the rest of 2016 is going to be full of even bigger and better things for Molly Anna Band!

1. How old were you when you started getting involved in music and how?
Mike: I first started playing the guitar when I was 12 because of bands like Sum 41 and Blink 182. My tastes have changed somewhat since then though :) The first band I was in was just me and a couple of friends bashing out a four power chord pattern for three minutes at a time with no drummer or musical awareness to speak of. It was nice.

2. What is the most inspiring musical performance you've ever seen?
Mike: It's a tie. Tommy Emmanuel in Worcester 2007 was incredible. One man, several guitars and a glass of red wine for roughly three hours. You could hear a collective exhale from the audience at the end of each song when they remembered to breathe again. Either that or Bellowhead in Sheffield City Hall 2013. They got the entire room ignoring social etiquette and dancing in the aisles.

1. Who influences you musically and what inspires you lyrically?
Molly: Lyrically, I tend to write introspectively - about feeling and experiences I've had. It's not always pretty!
Lots of people influence my music, from Lauryn Hill to the Offspring.
For 'Ghosts', I found The Weeknd and Smashing Pumpkins to be particularly inspiring.

2. Where in the world would you most like to tour and why?
Molly: I'd love to tour Australia and New Zealand, mostly because I've always wanted to visit there and it'd be a great excuse...

3. What is your favourite track from your EP 'Ghosts' and what process did you go through creating it?
Molly: It depends what mood I'm in! I guess I have a soft spot for 'Villain' as that's the track that started it all. It began, as many creative things do, at 2:30 in the morning, penning hundreds of versions of lyrics to a motif I came up with earlier that evening. I was feeling pretty blue so most of them were about blowing things up or burning things down. During the next week I arranged them into a narrative and then filled in the gaps with a chorus/middle eight. I enjoyed writing it so much that I decided to write more songs like it and create an EP!

Major or minor chords and why?
Mike: Minor chords. I think there's more harmonically interesting stuff you can do with them even within the confines of a regular major scale. Also I've liked far less songs I've written with major chords.

'Ghosts EP' Review:
This is a great debut release, with five tracks, all defining alternative music. Molly Anna Band's most recent single 'The Gun' opens the EP, it's beautifully emotive (much like the rest of the EP), and the layers gradually building all compliment each other so well. Their first single 'Villain' follows with a darker, atmospheric and more intense tone, with fuzzy guitars contrasted with clean piano and a steady rhythm. 'Til You Collapse' and 'Tonight' both strongly remind me of Alanis Morrisette, the first being darker, with a brilliant combination of guitars, again complimenting the piano and bass and lyrically, honest and emotive. Between those two is my personal favourite from the release, 'Horrorshow'; it's slower and steadier, with stunning piano and beautiful guitars being brought in too. Overall, a great EP with some well crafted tracks, if you like alternative music, with hints of rock, grunge and tiny bits of folk, this is a release for you!